We gather together to ask the Lord's blessing

1 We gather together to ask the Lord’s blessing;
He chastens and hastens his will to make known;
The wicked oppressing now cease from distressing.
Sing praises to his name; he forgets not his own.


2 Beside us to guide us, our God with us joining,
Ordaining, maintaining his kingdom divine;
So from the beginning the fight we were winning;
Thou, Lord, wast at our side; all glory be thine!


3 We all do extol thee, thou leader triumphant,
And pray that thou still our defender wilt be.
Let thy congregation escape tribulation;
Thy name be ever praised! O Lord, make us free!

Theodore Baker (b. New York, NY, 1851; d. Dresden, Germany, 1934). Baker is well known as the compiler of Baker's Biographical Dictionary of Musicians (first ed. 1900), the first major music reference work that included American composers. Baker studied music in Leipzig, Germany, and wrote a dissertation on the music of the Seneca people of New York State–one of the first studies of the music of American Indians. From 1892 until his retirement in 1926, Baker was a literary editor and translator for G. Schirmer, Inc., in New York City. In 1926, he returned to Germany. Psalter Hymnal Handbook, 1987 Go to person page >

All tunes published with 'We Gather Together'^ top

This hymn was originally a Dutch patriotic song, written around 1600 to celebrate the freedom of the Netherlands from Spanish rule. However, God's kingdom transcends national and ethnic boundaries. When the Church sings this hymn, she is reminded of the words of the apostle Paul: “For we do not wrestle against flesh and blood, but against the rulers, against the authorities, against the cosmic powers over this present darkness, against the spiritual forces of evil in the heavenly places” (Ephesians 6:12, ESV). The day will come when God will overthrow the devil and all evil. Even now, we can say, “God is our refuge and strength, a very present help in trouble” (Psalm 46:1). In singing this hymn, the people of God seek His help and thank Him for His presence in the pursuit of victory over evil, for we know that God “forgets not His own.”

The original Dutch text of this hymn, “Wilt heden nu treden,” was first published in 1626 by Adrian Valerius in his Nederlandtsch Gedenckclanck, though it may have been written earlier, in the late 16th century. The author is unknown. This text was written in celebration of the freedom of the Netherlands from Spanish rule. Theodore Baker, an American music scholar, translated the text into English in 1894 for an anthem titled “Prayer of Thanksgiving.”

When this hymn was first published in America, the idea of the United States' Manifest Destiny to overtake the American continent in God's name was still popular. The militant language and patriotic association can lend a sense of nationalism to the song that is inappropriate for a worship service. It may take some care to put this text in an appropriate context for worship. However, there are several phrases that may bring certain Scripture passages to mind (e.g., “the wicked oppressing,” Ps. 55:3; see also Scripture references below). When the hymn is put in this context, the message is clearly about the Church seeking God's help and thanking Him for His presence in the pursuit of victory over evil

The tune now known as KREMSER is a Dutch folk tune, “Ey, wilder den wilt,” and is also from Valerius' Nederlandtsch Gedenckclanck (1626). It is the only tune to which “We Gather Together” is sung. Edward Kremser, a Viennese choirmaster, popularized this tune as part of a collection of Dutch folk songs arranged for male voices in 1877, and it has become known by his name. The original publication of Baker's text in 1894 was set to this tune. The tune is simple and well-known.

This hymn is traditionally associated with Thanksgiving Day in the United States, and could be used in a service for that occasion. It could also be used as an opening hymn for a service with the theme of the Church triumphant. If used for a choral prelude, Hal Hopson's arrangement of “We Gather Together” includes an instrumental descant throughout and a different melodic setting on the second verse.

A moderate tempo is appropriate, broadening in the third stanza to emphasize the exaltation of “thou leader triumphant.” Likewise, the accompaniment for the first two stanzas can be piano or organ alone, with other instruments entering on the third verse. “With Songs of Thanksgiving” is an arrangement by Douglas Wagner that includes a choral introduction and a trumpet descant on the third verse. 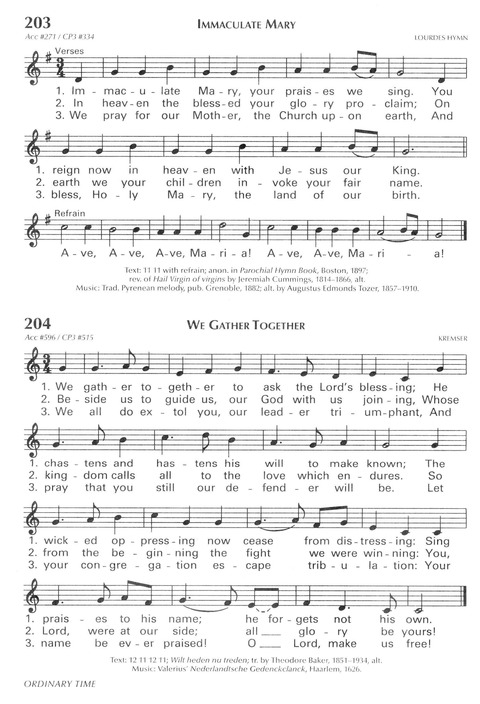 A New Hymnal for Colleges and Schools #72

Great Songs of the Church #1

Hymns for a Pilgrim People #552

Hymns of the Christian Life #572

Hymns to the Living God #64

Praise! Our Songs and Hymns #13

Display Title: We Gather Together First Line: We gather together to ask the Lord’s blessing Date: 2012
The Family Hymnal #14

The Hymnal for Worship and Celebration #561