Nothing but the blood of Jesus

What can wash away my sin


Refrain:
O precious is the flow
that makes me white as snow;
no other fount I know;
nothing but the blood of Jesus.

All tunes published with 'Nothing but the blood of Jesus'^ top

When this hymn was first published in 1876, Hebrews 9:22 was quoted underneath the title: “Without the shedding of blood there is no remission of sin.” This song elaborates on that idea, repeatedly stating that “nothing but the blood of Jesus” purifies us. The third stanza acknowledges that “naught of good that I have done” can save. As the hymn is sung, contemplate the significance of sin in separating us from God, and the great value of Jesus's work on the cross.

This text was written by Robert Lowry in 1876, shortly after he became pastor of a Baptist church in Plainfield, New Jersey, where he lived the rest of his life. It was first published in that year in Gospel Hymns by William H. Doane and Lowry, with Hebrews 9:22 quoted underneath the title.

There were originally six stanzas, but typically only the first four are sung today. The two that are not used begin “Now by this I’ll overcome” and “Glory! Glory! This I sing.” The theme of the text is the redemptive work of Christ on the cross, seen through the image of His shed blood. The stanzas express the need for redemption from sin, and the matchless value of Jesus's redeeming blood.

PLAINFIELD is a simple, pentatonic melody. It was written by Robert Lowry in 1876 for this text, with which it is inseparably paired. The name of the tune comes from the town where Lowry was probably living when he wrote it. Repeated notes and motifs and a narrow range of a fifth make this tune a very easy one for congregational singing.

This hymn may be sung at any time of year, especially when redemption is a theme of the service. This simple hymn could also be used in children's classes to teach that Jesus is the only source of redemption from sin. Try singing the stanzas in a call-and-response style, with the leader singing the first and third lines, and the children responding with “Nothing but the blood of Jesus.” This hymn works well for congregational singing, but an instrumental arrangement would make a good choice for Communion music, such as “Nothing but the Blood,” a handbell setting that emphasizes the simplicity of the tune. “The Power of His Blood” is a choral medley of three gospel hymns with the theme of Jesus' redeeming blood. The other two are “Are You Washed in the Blood?” and “There Is Power in the Blood.” The rhythm is upbeat, which can be accentuated by an optional instrumental ensemble. 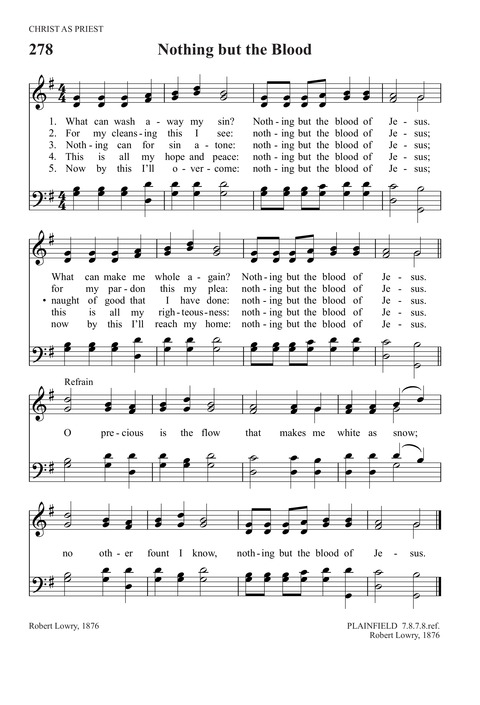 Hymns for a Pilgrim People #326

Hymns of the Christian Life #512

Display Title: Nothing but the blood of Jesus First Line: What can wash away my sin [sins] [stain] Author: Robert Lowry Date: 1992
Hymns of the Christian Life #512

Sacred Selections for the Church #197

Display Title: Oh! Precious is the flow First Line: What can wash away my sin? Tune Title: PLAINFIELD Date: 2006
The Christian Life Hymnal #255

The Hymnal for Worship and Celebration #195

Display Title: Nothing But the Blood First Line: What can wash away my sin? Tune Title: PLAINFIELD Author: Robert Lowry Meter: 7.8.7.8 with Refrain Date: 1986 Subject: Christ | Atonement, Crucifixion, Suffering and Death; Salvation | ; Testimony and Praise |
The Hymnal for Worship and Celebration #195

The Song Book of the Salvation Army #306

Display Title: O precious is the flow First Line: What can wash away my sin Author: Robert Lowry (1826-99) Date: 1986 Subject: The gospel | Response
The Song Book of the Salvation Army #306