When Morning Gilds the Skies

When morning gilds the skies

This litany of praise to Christ was translated from an anonymous
German text, "Beim frühen Morgenlicht," thought to date from around 1800 (perhaps even the mid-1700s). The German text was first published in Sebastian Portner's Katholisches Gesangbuch (1828) in fourteen stanzas of couplets with a refrain line.

Edward Caswall's English translation, prepared from one of several variants of the text, was published in six stanzas in Henry Formby's Catholic Hymns (1854). Caswall (b. Yately, Hampshire, England, 1814; d. Edgebaston, Birmingham, England, 1878) published another eight stanzas in his Masque of Mary (1858). Like most other hymnals, the Psalter Hymnal provides a text taken from various parts of the Caswall translation.

A morning hymn (st. 1) as well as an evening hymn (st. 4), the text presents praise to Christ from angels and human creatures (st. 2) and from the elements of earth to the farthest reach of the cosmos (st. 3). In fact, this text is for all times and places: "Be this the eternal song"!

Caswell, the son of an Anglican clergyman, studied for the priesthood at Brasenose College, Oxford, England. He was ordained in 1839 and served the church in Stratford-sub-Castle but resigned his position in 1847. By this time he had become deeply involved in the Oxford Movement, an Anglican movement with strong Roman Catholic leanings. In 1847 Caswell and his wife traveled to Rome, where they were received into the Roman Catholic Church. After his wife's death Caswell became a Roman Catholic priest and joined the Oratory of St. Philip Neri in Birmingham, a group supervised by John Henry Newman, an earlier Roman Catholic convert from the Church of England. Caswell then devoted himself to two main tasks–serving the poor of Birmingham and writing and translating hymns, mainly from the Latin office-books and from German sources. Many of his translations were published in his Lyra Catholica (1849) and, with revisions, in Hymns and Poems (1873).

Liturgical Use:
Many occasions as a hymn of praise to Christ; a hymn for all seasons and all times of worship–morning, midday, or evening; could also frame the day of worship with stanzas 1-3 used at the beginning of morning worship and stanzas 4-5 used as a doxology for evening worship.

Joseph Barnby (b. York, England, 1838; d. London, England, 1896) composed LAUDES DOMINI for this text [When morning gilds the skies] Tune and text were published together in the 1868 Appendix to Hymns Ancient and Modern and they have been inseparable ever since. An accomplished and popular choral di…

All tunes published with 'When Morning Gilds the Skies'^ top

Several of the Psalms begin and end with fervent declarations of praise, such as this: “Praise the Lord! Praise, O servants of the Lord, praise the name of the Lord! … Praise the Lord!” (Psalm 113:1, 9b ESV). Likewise, from the opening lines of early morning praise to the final couplet about eternal praise before the throne of God in heaven, this hymn has the constant refrain, “May Jesus Christ be praised.”

No one knows the original author of this text, which was translated from the German. One German version with 14 six-line stanzas appeared in Katholisches Gesangbuch of 1828, published in Würzburg by Sebastian Pörtner. In 1855, another German version appeared in F. W. von Ditfurth's Fränkische Volkslieder. Edward Caswall translated part of it into English in 1854 for Henry Formby's Catholic Hymns, and translated the whole hymn – 28 couplets with the refrain “May Jesus Christ be praised” – for his own The Masque of Mary, and Other Poems in 1858. In 1899, Robert Bridges made another translation in 5 twelve-line stanzas for the Yattendon Hymnal, drawing on Caswall's well-known translation for continuity. These two well-known English translations are quite different and may derive from varying German versions. Both of these texts were quite long – longer than suitable for a hymnal – so various centos (excerpts) have been prepared for singing in worship.

The text is given in six-line stanzas in modern hymnals to fit the standard tune. Most hymnals have four stanzas, though some have five or six. The first and last stanzas are nearly always from Caswall's translation, with the few exceptions taking both from Bridges. While there is some agreement on the opening and closing stanzas, the middle stanzas vary greatly in theme.

Because of the wealth of material to draw from in preparing this hymn for publication, there are almost as many versions as there are hymnals. About half the hymnals take their text from only one of the English poets, while the rest combine couplets from both. Roughly a third of Caswall's text and half of Bridges's are never used in hymnals.

This hymn is often classified as a morning hymn simply because of the opening line. However, a number of places throughout the entirety of the text name other times of day; for example, “When sleep her balm denies, my silent spirit sighs.” It is more properly a hymn of praise for various times of day and many situations of life – joy and sorrow, worship and work, and more.

Joseph Barnby wrote 246 hymn tunes, but LAUDES DOMINI is one of only a handful still in use, and is without doubt his most popular tune. LAUDES DOMINI was written for this text and was published with it in the 1868 Appendix to Hymns Ancient and Modern. The tune name is Latin and means “praise the Lord,” which refers to the refrain “May Jesus Christ be praised.” The tune is in two halves, like the text of each stanza, each of which repeats a musical motive. In the original publication, the tempo was marked “In quick time” and dynamics were indicated; the first half was to be sung mezzo forte with the refrain at forte, but the second half was marked piano with a crescendo to the refrain. Sing this tune in two phrases to reflect the structure of the text.

This hymn of praise may be sung at any time of year, and is often associated with early morning praise. The exultation expressed in the text may be served well by the use of handbells. A moderately easy arrangement of “When Morning Gilds the Skies” for handbell choir alone has simple rhythms and a few modulations. Another setting of “When Morning Gilds the Skies” is for choir and organ, with optional handbells and congregational participation. The third stanza is choir alone, and the final stanza has a descant. If just the organ is used, a vigorous accompaniment such as in “Dynamic Hymn Introductions” would stimulate the congregational singing. 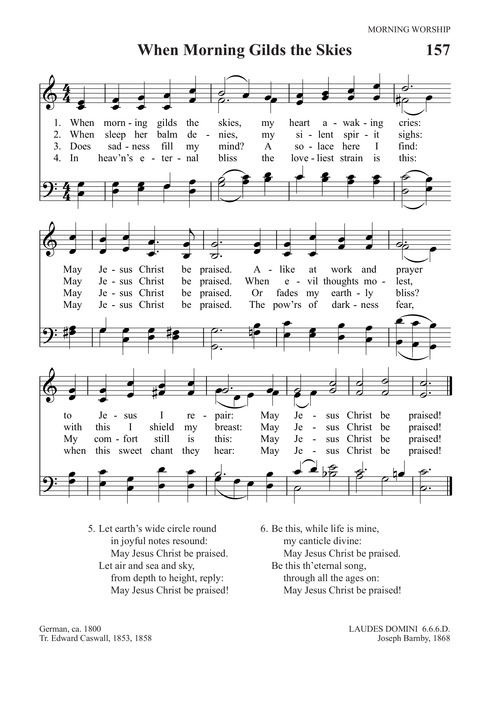 Great Songs of the Church (Revised) #152

Hymns for a Pilgrim People #60

Hymns of the Christian Life #46

Hymns to the Living God #68

Praise! Our Songs and Hymns #60

The Hymnal for Worship and Celebration #87

The New English Hymnal #473a

The New English Hymnal #473b

The Song Book of the Salvation Army #187