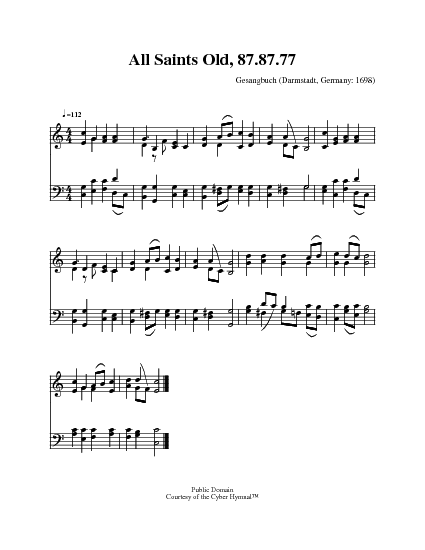 1 Who are these like stars appearing,
these before God's throne who stand?
Each a golden crown is wearing;
who are all this glorious band?
Alleluia! Hark, they sing,
praising loud their heav'nly King.


2 Who are these of dazzling brightness,
these in God's own truth arrayed,
clad in robes of purest whiteness,
robes whose lustre ne'er shall fade,
ne'er be touched by time's rude hand?
Whence come all this glorious band?


3 These are they who have contended
for their Savior's honor long,
wrestling on 'til life was ended,
foll'wing not the sinful throng;
these, who well the fight sustained,
triumph thro' the Lamb have gained.


4 These are they whose hearts were riven,
sore with woe and anguish tried,
who in pray'r full oft have striven
with the God they glorified;
now, their painful conflict o'er,
God has bid them weep no more.


5 These, like priests, have watched and waited,
off'ring up to Christ their will;
soul and body consecrated,
day and night to serve him still:
now in God's most holy place
blest they stand before his face.

Schenk, Heinrich Theobald, son of Simon Schenk, pastor at Heidelbach, on the Schwalm, near Alsfeld, Hesse, was born at Heidelbach, April 10, 1656. He entered the Padagogium at Giessen, in 1670, and then pursued his studies at the University (M.A. 1676). In 1676 he returned to the Padagogium, as one of the masters; and was, from 1677 to 1689, "præceptor classicus." On Dec. 27, 1689, he was ordained as Town preacher and "definitor," at the Stadtkirche in Giessen. He died at Giessen, April 11, and was buried there April 15, 1727…The registers at Giessen give the date of his funeral, but not of his death; but say, that at his death he was aged 71 years less 10 days, which would rather suggest April 21 as the date of his birth.) Only one hymn… Go to person page >
^ top

All tunes published with 'Who Are These Like Stars Appearing'^ top 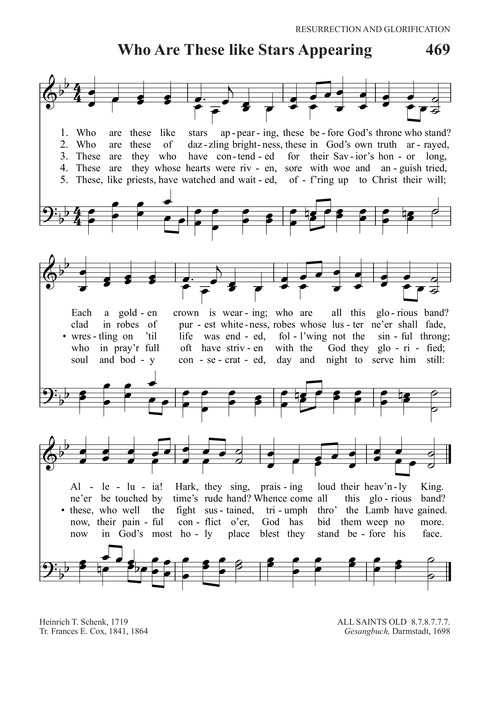