All Glory Be to God on High

All texts published with ALLEIN GOTT IN DER HÖH^ top

The tune name ALLEIN GOTT derives from the opening words of Decius's rhymed text in High German. The tune was first published in Schumann's Geistliche Lieder. Decius adapted the tune from a tenth-century Easter chant for the Gloria text, beginning at the part accompanying the words "et in terra pax. . . " ("and on earth, peace. . . "). Because the Gloria became part of the ordinary (the unvarying parts) of the Roman Catholic Mass, there are many choral settings of the Latin text. Anglican composers have set the English text in their "great services," while Lutheran composers have written various chorale preludes on ALLEIN GOIT for organ. Bach used the hymn in cantatas 85, 104, 112, and 128 and composed about ten preludes on the tune. Typical of many Lutheran chorales, ALLEIN GOIT is in bar form (AAB).

Text: All Glory Be to Thee, Most High

Text: All Glory Be to God on High

Text: Across the Sky the Shades of Night

Text: God Is Our Refuge and Defense

Text: To God On High Be Thanks and Praise

Text: All Glory Be to God on High 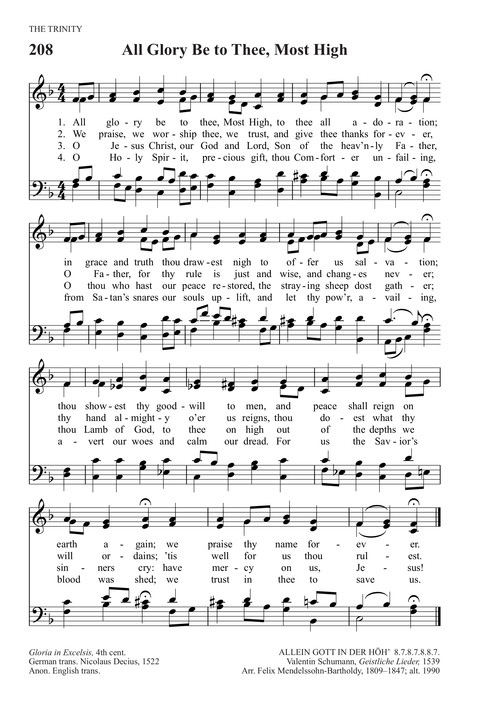