All Glory Be to God on High 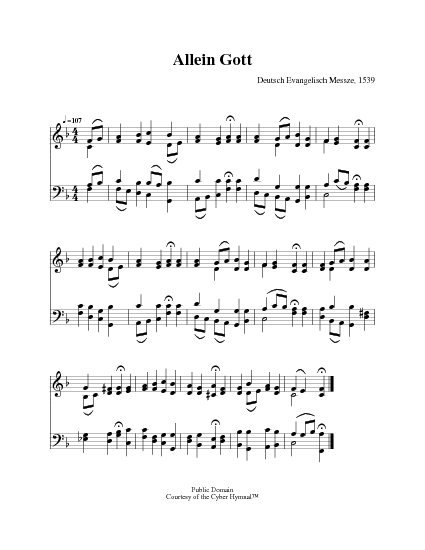 All glory be to God on high, Who hath our race befriended

1 All glory be to God on high,
Who hath our race befriended!
To us no harm shall now come nigh,
The strife at last is ended.
God showeth His good will to men,
And peace shall reign on earth again;
O thank Him for His goodness!


2 We praise, we worship Thee, we trust,
And give Thee thanks forever,
O Father, that Thy rule is just
And wise, and changes never.
Thy boundless pow'r o'er all things reigns,
Done is whate'er Thy will ordains:
Well for us that Thou rulest.


3 O Jesus Christ, Thou only Son
Of God, Thy heav'nly Father,
Who didst for all our sins atone
And Thy lost sheep dost gather.
Thou Lamb of God, to Thee on high
From out our depths we sinners cry,
Have mercy on us, Jesus!


4 O Holy Ghost, Thou precious Gift,
Thou Comforter unfailing,
O'er Satan's snares our souls uplift
And let thy pow'r availing
Avert our woes and calm our dread.
For us the Saviour's blood was shed;
We trust in Thee to save us.

A translation of the fourth-century Latin text "Gloria in excelsis Deo," this song is a series of acclamations to God in a pattern that was common in doxologies used in the Greek liturgies of the early Christian church. Stanza I consists of an opening antiphon from Luke 2: 14 and an acclamation to God the Father. Stanzas 2 and 3 are both acclamations to God the Son. Stanza 2 contains echoes from both the Agnus Dei and the Kyrie (257 and 258). A modern ecumenical translation reads as follows:

Glory to God in the highest,
and peace to God's people on earth.
Lord God, heavenly King,
almighty God and Father,
we worship you, we give you thanks,
we praise you for your glory.

Lord Jesus Christ, only Son of the Father,
Lord God, Lamb of God,
you take away the sin of the world:
have mercy on us;
you are seated at the right hand of the Father:
receive our prayer.

In the Greek-speaking church the text of "Gloria in excelsis Deo" (or Gloria, as the Song is commonly known) at first included only the words of Luke 2: 14. The fifth-century "Liturgy of St. James," still used in some parts of the Orthodox Church today, preserves the Gloria in its short form, but the song is also used in various longer forms. One of the earliest long forms is recorded in the Greek Codex Alexandrinus, which dates from the late fifth century. The Gloria presumably entered the Roman church in the fourth century under the influence of Hilary, Bishop of Poitiers, France, and it was translated into Latin. It became a standard part of the Roman Mass from the sixth century onward and became known as the "Greater Doxology" (as compared with the "Lesser Doxology," or Gloria Patri, 635 and 636).

Very early in the Reformation, Nikolaus Decius (b. Hof, Franconia, Bavaria, c. 1485;d. Germany, after 1546) prepared a rhymed version of the Gloria, published in Low German in Joachim Shiter's Rostock Gesangbuch (1525) and in High German in Valentin Schumann's Geistliche Lieder (1539). Often used in the Lutheran tradition, Decius's text added an acclamation to the Holy Spirit in a fourth stanza, which, though not unwelcome, is not part of the original text as shown above. (The 1959 Psalter Hymnal also includes Decius's four stanzas at 319.)

Educated in a Latin school in Hof and at the University of Leipzig, Germany, Decius became a monk and served as head of the Benedictine Monastery at Steterburg. In 1523 he studied theology at the University of Wittenburg under Martin Luther. At Luther's recommendation he became a pastor in Stettin in 1524 and moved to Mühlhausen in 1534, where he was influenced by Dutch Calvinist refugees. He also served as church musician and preacher at the Königsberg court of Duke Albrecht of Prussia. Decius is credited with German hymnic versifications of "ordinary" parts of the Mass-the Kyrie (258), Gloria, Credo (520), Sanctus (626), and Agnus Dei (257), which he originally prepared to fit their corresponding chant tunes.

Ulrich Zwingli also made use of the Gloria, having worshipers recite it antiphonally between Scripture lessons. Thomas Cranmer introduced it into Anglican worship by including it in The Book of Common Prayer (1549).

The English translation in the Psalter Hymnal is primarily by Francis Bland Tucker (b. Norfolk, VA, 1895; d. Savannah, GA, 1984), prepared in 1977 for publication in the American Protestant Episcopal Hymnal 1982 (1985). Bert Polman (PHH 37) altered the text slightly to bring it even closer to the Latin original.

An Episcopal priest, Tucker has been called "the dean of American hymn writers." He was educated at the University of Virginia and Virginia Theological Seminary. During World War I he served as an operating room assistant at Verdun. Ordained in 1920, Tucker had two long pastorates: St. John's Church in Georgetown, Washington, D.C. (1925-1945), and Christ Church in Savannah, Georgia (1945-1967), where, earlier, John Wesley had briefly served. Tucker was active in the Civil Rights Movement and in various civic organizations. He served on the committee for the Episcopal Hymnal 1940, which published six of his hymn texts and translations, and on the committee for the Hymnal 1982. In 1980 he was honored as a Fellow of the Hymn Society in the United States and Canada.

Liturgical Use:
Sung daily during Morning Prayer in the Eastern Church, at the beginning of worship in every Roman Catholic Mass, and in many historic Protestant liturgies; for the opening of worship; also suitable as a doxology.

The tune name ALLEIN GOTT derives from the opening words of Decius's rhymed text in High German. The tune was first published in Schumann's Geistliche Lieder. Decius adapted the tune from a tenth-century Easter chant for the Gloria text, beginning at the part accompanying the words "et in terra pax.… 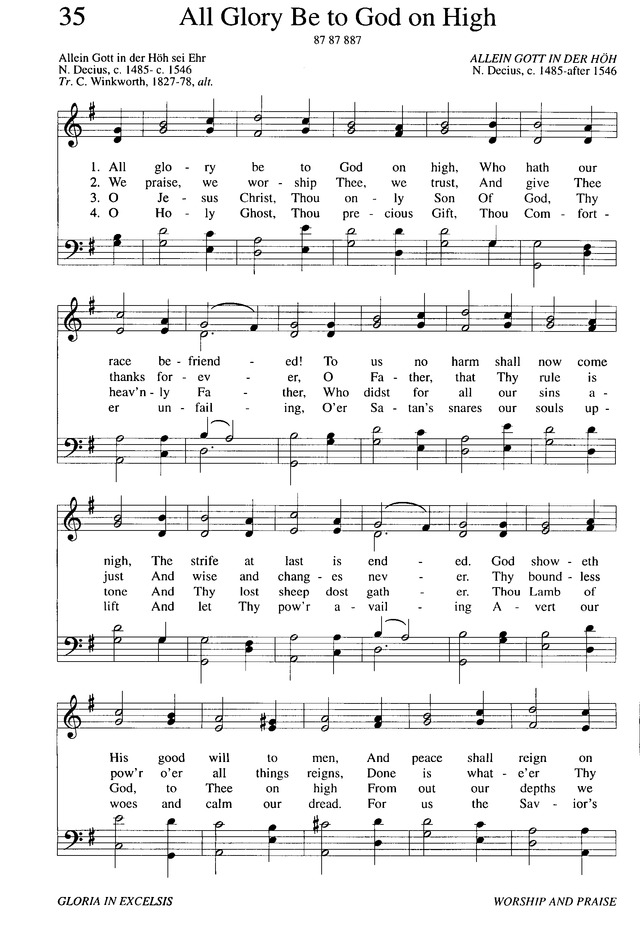 Hymns of the Christian Life #5