Freeman Lewis USA 1780-1859. Born at Basking Ridge, NJ, he became a surveyor, writer, and traveling school teacher who played the organ and wrote music on the side. His family moved to Fayette, PA, in 1796. In 1809 he married Rebecca A Craft, and they had 11 children: Runyan, David, George, James, John, William, Levi. Alpheus, Thomas, Margaret, and Mary Ann. Three died young (of flux and scarlet fever). He compiled and published a book of camp meeting hymns and other sacred music:”The beauties of harmony” (1813-16-18), which included some of his own compositions. An appendix to it contained explanations of musical terms amd rules and principles of composition. These were sometimes used in singing schools. He also served as cou… Go to person page >
^ top

Take Up Thy Cross, the Savior Said

All texts published with BOURBON^ top

A pentatonic (five-pitch) folk tune from the southern United States, BOURBON fits well with the penitential text of Psalm 38. The tune calls for unison singing, with accompaniment providing a firmly articulated rhythm. Like many pentatonic tunes, when unaccompanied it can be sung in canon after either one or two measures.

Included in Columbian Harmony (1825), BOURBON was credited there to Freeman Lewis (1780-1859) and set to "Twas on that Dark and Doleful Night," a text often attributed to Isaac Watts. The tune appeared in several other nineteenth-century songbooks, among them Hauser's Hesperian Harp (1848). The tune title presumably refers to the aristocratic French family whose descendants included Henry IV, Phillip V, and Charles III, and after which a Kentucky county is named.

The harmonization (1958) is by Louise McAllister (b. Louisville, KY, 1913; d. Richmond, VA, 1960). She spent her childhood in Louisville, where her father was a professor at Louisville Presbyterian Theological Seminary. In 1925, when her father began teaching at Union Theological Seminary, she moved to Richmond, Virginia, and lived there the rest of her life. A pianist, composer, teacher, and writer, McAllister attended the Collegiate School in Richmond, Virginia, and Mary Baldwin College, Staunton, Virginia. She published many piano compositions and harmonizations of folk-hymn melodies.

Text: Rebuke Me Not in Anger, LORD
^ top 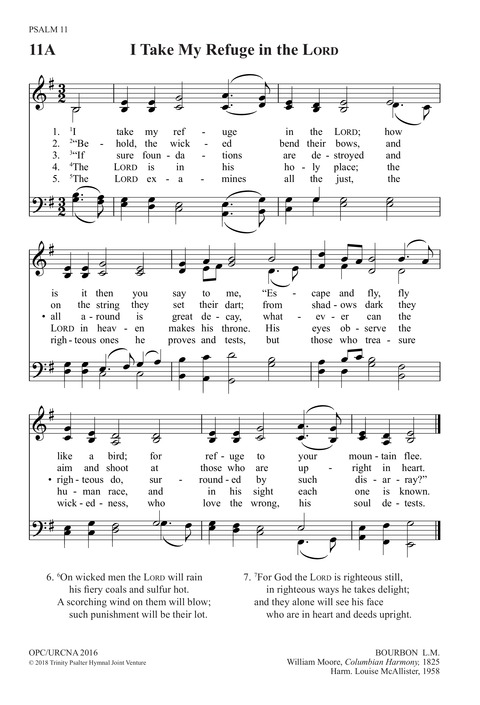 The Harmonia Sacra #60B

The Shenandoah Harmony #13A