All Creatures of our God and King

Ye Watchers and Ye Holy Ones

From All That Dwell Below the Skies

From all that dwell below the skies,
Let the Creator's praise arise;
Let the Redeemer's name be sung
Through ev'ry land by ev'ry tongue.

The setting is by Ralph Vaughan Williams (PHH 316); first published in The English Hymnal (1906), it has become the most popular version of LASST UNS ERFREUEN. In that hymnal the tune was set to Athelstan Riley's "Ye watchers and ye holy ones" (thus it is sometimes known as VIGILES ET SANCTI).

In this hymn a great text is matched by an equally strong and effective tune. Try these two possibilities of antiphonal singing: divide stanzas between women and men, or assign the verses to one group and the "alleluias" to another. Accompanists can signal such antiphonal effects in their use of varied registration. Registration changes also will help interpret the text; for example, the third stanza can begin with a lighter registration and move to a "blazing" sound on the second half.

Try having the congregation sing some stanzas unaccompanied but add organ (with full stops) at the "alleluias." Or, for a fine effect, have the congregation sing some stanzas in unison with accompaniment and the choir sing the "alleluias" in harmony unaccompanied, as indicated in the Psalter Hymnal. It is musically correct and pastorally wise to observe a fermata at the end of the second "alleluia" on the second system by turning that half note into a whole note. No ritard is necessary at the end of the hymn; it is built right into the final "alleluia" phrase. Try adding instruments to enhance this magnificent tune; there are several fine concertato versions in print that involve trumpets and/or full brass scoring.

Text: All Creatures of Our God and King

Text: He Is Risen!

Text: A Hymn of Glory Let Us Sing

Text: Let Us Rejoice, the Fight Is Won

Text: All Creatures of Our God and King

Text: Praise God From Whom All Blessings Flow
^ top 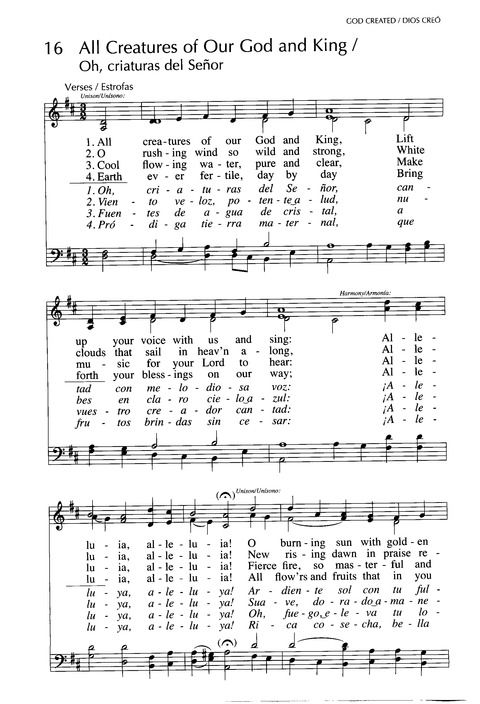 A New Hymnal for Colleges and Schools #58

Tune Title: Lasst uns erfreuen First Line: All creatures of our God and King Date: 1992
A New Hymnal for Colleges and Schools #58

Tune Title: LASST UNS ERFREUEN First Line: From all that dwell below the skies Date: 1983
Hymns Ancient and Modern, New Standard Edition #98a

Tune Title: LASST UNS ERFREUEN First Line: From all that dwell below the skies Date: 1983
Hymns and Psalms #489

Hymns for a Pilgrim People #4

Hymns for a Pilgrim People #36

Hymns for a Pilgrim People #261

Hymns to the Living God #31

Include 120 pre-1979 instances
All instances^ top
Suggestions or corrections? Contact us