John Warrington Hatton (b. Warrington, England, c. 1710; d, St. Helen's, Lancaster, England, 1793) was christened in Warrington, Lancashire, England. He supposedly lived on Duke Street in Lancashire, from where his famous tune name comes. Very little is known about Hatton, but he was most likely a Presbyterian, and the story goes that he was killed in a stagecoach accident. Bert Polman Go to person page >
^ top

Jesus Shall Reign Where'er the Sun

Jesus shall reign where'er the sun
does its successive journeys run,
his kingdom stretch from shore to shore,
till moons shall wax and wane no more.

First published anonymously in Henry Boyd's Select Collection of Psalm and Hymn Tunes (1793), DUKE STREET was credited to John Hatton (b. Warrington, England, c. 1710; d, St. Helen's, Lancaster, England, 1793) in William Dixon's Euphonia (1805). Virtually nothing is known about Hatton, its composer, other than that he lived on Duke Street in St. Helen's and that his funeral was conducted at the Presbyterian chapel there.

A sturdy and much loved tune, DUKE STREET has a generic resemblance to TRURO (413,539) and to the African American gospel-style doxology (637). Sing stanzas 1 and 5 in unison; stanzas 2, 3, and 4 in harmony. The final stanza is a doxology that would be enhanced by a descant; it would also benefit from a stately tempo. Use strong and vigorous accompaniment with trumpets if possible.

Text: Forever Settled in the Heavens

Text: Forth in Thy Name, O Lord

Text: God of the Morning, at Whose Voice

Text: I Know That My Redeemer Lives (Medley)

Text: Now to the Lord a Noble Song

Text: O Lord, Thou Art My God and King

Text: Our Lord Is Risen from the Dead

Text: Pour Out Thy Spirit from on High

Text: 'Tis by the Faith of Joys to Come

Text: Unto Thy Temple, Lord, We Come

Text: Glory To God The Trinity

Text: Lo, In The East Appears A Star

Text: God Of The Morning, At Whose Voice

Text: The God Of Glory Walks His Round

Text: Forth in Thy Name, O Lord

Text: Give to Our God Immortal Praise

Text: I Know That My Redeemer Lives!
^ top 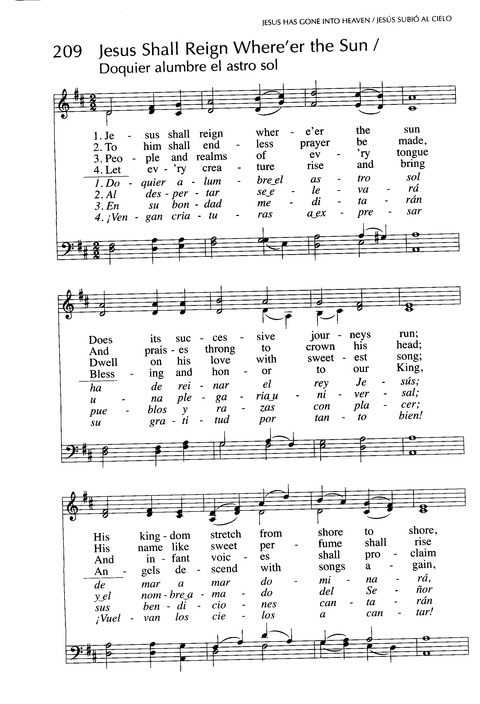 A New Hymnal for Colleges and Schools #16

A New Hymnal for Colleges and Schools #26

Ancient and Modern #631a

Hymns for a Pilgrim People #211

Hymns for a Pilgrim People #300

Hymns for a Pilgrim People #401

Lift Every Voice and Sing II #56

Tune Title: DUKE STREET First Line: From all that dwell below the skies Composer: John Hatton
Melodies of Salvation #86

Include 472 pre-1979 instances
All instances^ top
Suggestions or corrections? Contact us