1 O Christ, our hope, our heart's desire,
redemption's only spring!
Creator of the world art thou,
its Savior and its King.


2 How vast the mercy and the love
which laid our sins on thee,
and led thee to a cruel death,
to set thy people free.


3 But now the bands of death are burst,
the ransom has been paid;
and thou art on thy Father's throne,
in glorious robes arrayed.


4 O Christ, be thou our lasting joy,
our ever great reward!
Our only glory may it be
to glory in the Lord.

Although manuscript copies do not appear until the eleventh century, the Latin source for this Ascension text ('Jesu, nostra redemptio, amor et desiderium") is thought to date from the seventh or eighth century. A five-stanza English translation by John Chandler was published in his Hymns of the Primitive Church (1837), and a doxology stanza was added later. Of those stanzas, 1-3 and 5 are included with a few word changes.

This short but comprehensive text honors Christ as creator of the world (st. 1); meditates on his love, which led to his atoning death (st. 2); voices our worship to the ascended Christ for his victory over death (st. 3); and offers our prayer to keep Christ central in our lives (st. 4).

John Chandler (b. Widey, Godalming, Surrey, England, 1806; d. Putney, Surrey, 1876) spent most of his life in Widey, where his father was the vicar. After theological studies at Corpus Christi College, Oxford, England, he assumed his father's position in Widey in 1837. Noting that many of the prayers of the Anglican Church were English translations of early Latin prayers, Chandler decided that the church should sing hymns from that era as well. Because he did not find many suitable English translations, he made his own and published them in The Hymns of the Primitive Church (1837) and, with revisions, in The Hymns of the Church, mostly Primitive (1841). Some of the Latin hymns he translated, however, were not as ancient as the words "Primitive Church" might suggest; he also included translations of hymns from the Paris Breviary (1736).

Liturgical Use:
A hymn of response after the sermon; Easter; Ascension; many other worship services.

All tunes published with 'O Christ, Our Hope, Our Heart's Desire'^ top 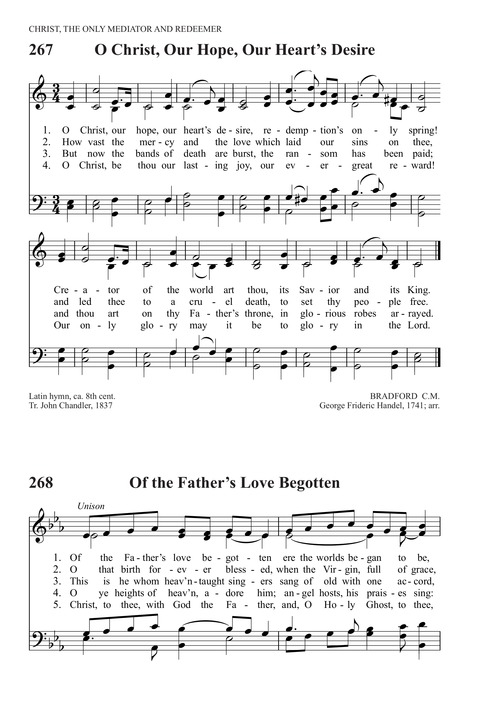