Severus Gastorius (1647-1682 ) was a cantor in Jena, central Germany. The son of a Weimar school teacher, Severus was born with the family name Bauchspiess (later Latinised to Gastorius) in Oettern, near Weimar. In 1667, he started studying at the University of Jena. From 1670, he deputized for cantor Andreas Zöll in Jena and married his daughter the following year. Gastorius assumed Zöll's position after his death in 1677. One of his friends, Samuel Rodigast, wrote the hymn "Was Gott tut, das ist wohlgetan" for Gastorius when he was sick (to cheer him up as Rodigast writes in his dedication). Even before he recovered, Gastorius set it to music based on a melody by Werner Fabricius. The tune became widely known in Germany as the cantor… Go to person page >
^ top

Whate'er my God ordains is right

What God Ordains Is Always Good

All texts published with WAS GOTT TUT^ top

WAS GOTT TUT is usually attributed to Severus Gastorius (b. Ottern, near Weimar, Germany, 1646; d. Jena, Germany, 1682), who presumably composed the tune during a convalescence in 1675 (see above). The tune was published in Ausserlesenes Weimarisches Gesangbuch (1681). Educated at the University of Jena, Gastorius became cantor of Jena in 1677, a post he held until his death. He wrote a variety of church music, including five funeral motets, but he is known primarily for composing WAS GOTT TUT.

The tune is a classic example of a seventeenth-century German chorale setting in bar form (AAB). Sing in sturdy unison, changing to harmony for some of the stanzas. Do not rush, but sing with stately fervor. Observing fermatas at the ends of the first two 1 long lines will help to bring a sense of patience to this melody by giving more breathing time.

Text: O Son of God, We Wait for Thee 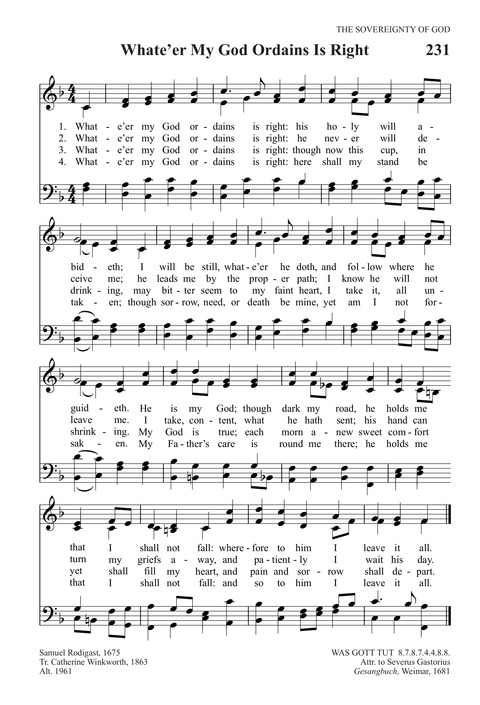 Psalms for All Seasons #136F