Dr. Lowell Mason (the degree was conferred by the University of New York) is justly called the father of American church music; and by his labors were founded the germinating principles of national musical intelligence and knowledge, which afforded a soil upon which all higher musical culture has been founded. To him we owe some of our best ideas in religious church music, elementary musical education, music in the schools, the popularization of classical chorus singing, and the art of teaching music upon the Inductive or Pestalozzian plan. More than that, we owe him no small share of the respect which the profession of music enjoys at the present time as contrasted with the contempt in which it was held a century or more ago. In fact, the… Go to person page >
^ top

Hail to the Brightness of Zion's Glad Morning!

Lowell Mason (b. Medfield, MA, 1792; d. Orange, NJ, 1872) composed WESLEY for Thomas Hastings's (PHH 538) "Hail to the Brightness of Zion's Glad Morning," and the two were published together in Spiritual Songs for Social Worship (1833). The tune name honors the founders of Methodism, John and Charles Wesley. WESLEY consists of four lines–the first and third beginning identically, and the fourth providing a suitable climax to the melody. Sing this jubilant tune with lots of energy.

As a child Mason learned to play every musical instrument available to him. He bought music books and attended a singing school when he was thirteen, and soon began teaching singing schools and directing a church choir. In 1812 he moved to Savannah, Georgia, where he helped to establish the firm Stebbins and Mason, which sold musical instruments in addition to dry goods. Mason also adapted, composed, and harmonized tunes for The Boston Handel and Haydn Society Collection of Church Music (1821). This collection was widely used and resulted in public demand for Mason to lead the music at singing schools, concerts, and Sunday school conventions.

He moved to Boston in 1827 to become the music director in three churches; later he became the choir director of the Bowdoin Street Church. In 1833 Mason helped to found the Boston Academy of Music, which was instrumental in introducing music education to the Boston public schools in 1838. An advocate of Pestalozzi's educational principles (an inductive teaching method), Mason frequently lectured in England and the United States. A major force in musical education in the United States and in the promotion of European models of church music (as opposed to the southern folk-hymn tradition), Mason also encouraged the change from exclusive psalm singing to the singing of hymns in the churches.

In association with Thomas Hastings (PHH 538), George Webb (PHH 559), and others, Mason compiled some eighty hymnals and collections, including The Juvenile Psalmist (1829), Spiritual Songs for Social Worship (1832), and, most importantly, Carmina Sacra (1841, revised 1852). Mason composed over eleven hundred original hymn tunes and arranged another five hundred, mainly from European sources. He derived most of his tune names from the Old Testament.

Text: Hail to the Brightness of Zion's Glad Morning!

Text: Sing to the Lord, Sing His Praise

Text: Sing to the LORD, Sing His Praise
^ top 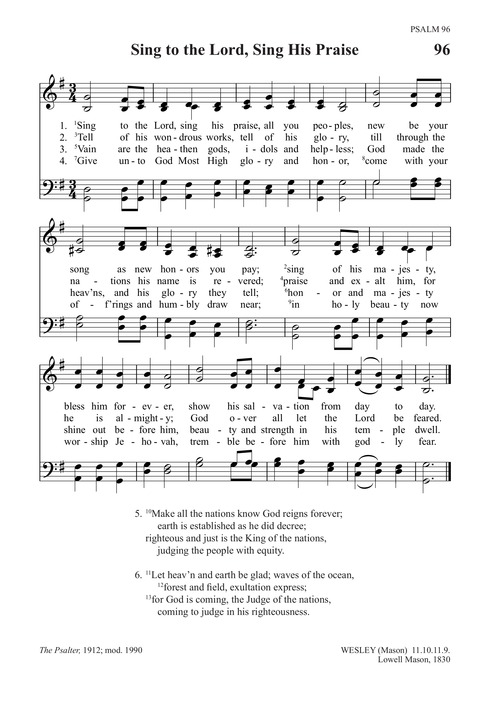 Psalms for All Seasons #96B