James Mountain (b. Leeds, York, England, 1844; d. Tunbridge Wells, Kent, England, 1933) composed WYE VALLEY for Havergal's text ("Like a river glorious") on one of his first preaching tours through Britain. Throughout his life Mountain was influenced by the Countess of Huntington and her following of evangelical Pietists in the Anglican Church. He was trained at the Pietist Rotterham College and later served the Countess's church in Tunbridge Wells (1889-1897). Strongly influenced by Dwight L. Moody and Ira D. Sankey's (PHH 73) evangelistic tour of England, Mountain followed their example and did evangelistic work from 1874 to 1889, both in England and abroad. Later he became a Baptist and founded St. John's Free Church in Tunbridge Wells. Mountain wrote a number of devotional works as well as hymns and hymn tunes. Mountain also imitated Sankey's musical style. Assisted by Frances Havergal, he compiled Hymns of Consecration and Faith (1876), which included her text with the heading "Perfect Peace." WYE VALLEY is named for the district around the village of Wye, near Ashford in Kent. This relatively simple tune is marked by repeated melody tones. In fact, the refrain melody is a repeat of the latter half of the tune for the stanzas. Sing in harmony throughout in six long phrases rather than twelve short ones. Try singing unaccompanied on stanza 2. --Psalter Hymnal Handbook
^ top

Text: At the Name of Jesus

Text: At the Name of Jesus 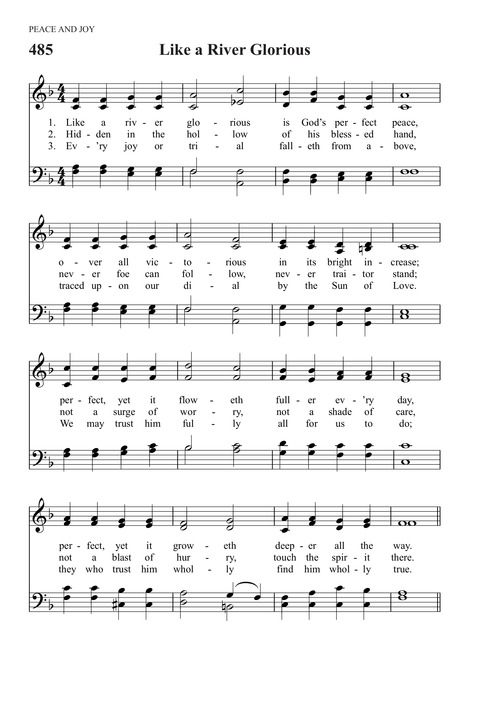 Hymns for a Pilgrim People #392

Hymns for a Pilgrim People #539

The Hymnal for Worship and Celebration #315

The Hymnal for Worship and Celebration #494