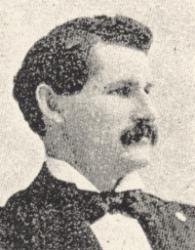 James Milton Black USA 1856-1938 Born in South Hill, NY, Black was an American hymn composer, choir leader and Sunday school teacher. He worked, lived,and died in Williamsport, PA. An active member, he worked at the Pine Tree Methodist Episcopal Church there. He married Lucy Love Levan. He started his music career with John Howard of New York and Daniel B. Towner of the Moody Bible Institute in Chicago. He edited a dozen gospel song books and wrote nearly 1500 songs. He also served on the commission for the 1905 Methodist Hymnal.

James Milton Black (19 August 1856 – 21 December 1938) was an American composer of hymns, choir leader and Sunday school teacher. Black was born in South Hill, New York, but worked, lived and died in Williamsport, Pennsylvania. It is there that he worked at his Methodist Episcopal Church. His first hymnal collections were: * Songs of the Soul (1894) * Songs of the Soul, Number Two (1896) Some of his hymns include: * Come, Oh, Come to Me * The Day of All Days * We Shall Reign with Him in Glory * When The Roll Is Called Up Yonder Some of hymn music with lyrics by others include:
Wikipedia Biography
TextsTunesHymnals