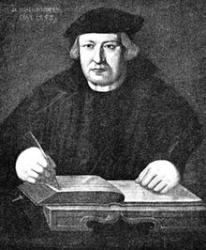 Jonas, Justus (Jobst, Jost, Jodocus), son of Jonas Koch, burgomaster of Nordhausen, in Thuringia, was born at Nordhausen, June 5, 1493. He studied at Erfurt (M.A. 1510), and Wittenberg (LL.B.); returning to Erfurt in 1517, where, in 1518, he was appointed Canon of the St. Severus Church, Professor, and, in 1519, Rector of the University. In the festal ode on his rectorate (by his friend Eoban Hesse) he was called the Just Jonas, and henceforth he adopted Jonas as his surname, and it is as Jonas that he is known. In 1521 he was appointed Probst of the Schlosskirche (All Saints) at Wittenberg, D.D., and Professor of Church Law in the University. Here he worked for twenty years as a true and devoted friend and helper of Luther and Melanchthon, and was then, from 1541 to 1546, superintendent and chief pastor at Halle. After Luther's death he passed through various troubled experiences, but became in 1553 superintendent and chief pastor at Eisfeld on the Werra, where he died Oct. 9, 1555. He added two stanzas to Luther's "Erhalt uns Heir, bei deinem Wort" (q.v.). The only original hymn by him which has passed into English is:—
Wo Gott der Herr nicht bei uns hält. Ps. cxxiv. First published in Eyn Enchiridion, Erfurt, 1524, and thence in Wackernagel, iii. p. 42, in 8 stanzas. In the Unverfälschter Liedersegen, 1851, No. 254. Translated as, "If God were not upon our side," by Miss Winkworth, 1869, p. 117. [Rev. James Means, M.A.]

Justus Jonas, the Elder (5 June 1493 – 9 October 1555), or simply Justus Jonas, was a German Lutheran theologian and reformer. He was a Jurist, Professor and Hymn writer. He is best known for his translations of the writings of Martin Luther and Philipp Melanchthon. He accompanied Martin Luther in his final moments.
Wikipedia Biography
TextsTunesHymnals