Christ the Lord is risen again! 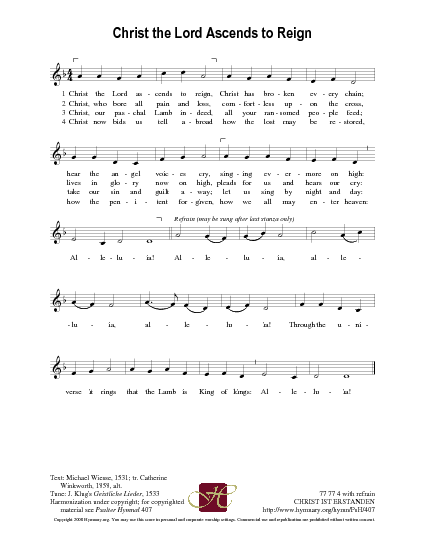 
2 He who gave for us his life,
who for us endured the strife,
is our Paschal Lamb today.
We too sing for joy and say:
Hallelujah!


3 He who bore all pain and loss
comfortless upon the cross
lives in glory now on high,
pleads for us, and hears our cry:
Hallelujah!


4 He whose path no records tell
has descended into hell;
he the strong man armed has bound
and in highest heav'n is crowned.
Hallelujah!


5 He who slumbered in the grave
is exalted now to save;
now through Christendom it rings
that the Lamb is King of kings.
Hallelujah!


6 Now he bids us tell abroad
how the lost may be restored,
how the penitent forgiv'n,
how we too may enter heav'n,
Hallelujah!

Michael Weiss was born at Neisse, in Silesia. He was a pastor among the Bohemian Brethren, and a contemporary with Luther. His hymns have received commendation. He died in 1540. --Annotations of the Hymnal, Charles Hutchins, M.A. 1872.… Go to person page >

As a basis for his text "Christus ist erstanden," Michael Weisse (b. Neisse, Silesia, Poland, c. 1480; d. Landskron, Bohemia, Czechoslovakia, 1534) turned to the same earlier sources that Martin Luther had turned to just a few years earlier (PHH 398). Weisse also reworked the older chorale "Christ ist erstanden," at that time a popular "leise"–a song that included a "Kyrie eleison" refrain shortened to "kirleis" or "leis." The original "Christ is erstanden" was developed from the Latin sequence “Victimae Paschali laudes” (c. 1100). Weisse's chorale was published in the first German-language Bohemian hymnal Ein Neugesängbuchlein (1531), which he edited. The hymnal contained 155 hymns, with some original texts written by Weisse and others translated by him from Bohemian. Many of Weisse's hymn texts also found their way into later German hymnals.

Weisse was a monk in Breslau when he came in contact with the writings of Martin Luther. After leaving the Roman Catholic Church, he joined the Bohemian Brethren, spiritual descendants of John Hus, who were later called Moravians. A leader among the Bohemian Brethren, Weisse established a number of their German-speaking communities and was sent to consult with Luther on issues of theology.

Catherine Winkworth (PHH 194) translated Weisse's text, which was published in her Lyra Germanica (1858). Originally entitled "Song of Triumph," the translation began with the words, "Christ the Lord is risen again." The Psalter Hymnal includes Winkworth's stanzas 1, 3, 7, and 6 (in that order).

Stanzas 1 and 2 focus on the Christ, who suffered death on the cross but who is now exalted in glory as our mediator. Stanza 3 is a prayer especially suited for celebration of Lord's Supper. Stanza 4 encourages us to preach the good news to extend Christ's kingdom. Each stanza concludes with an "alleluia." The final refrain rings in even more “alleluias” and includes the cosmic testimony “the Lamb is King of kings!”

All tunes published with 'Christ the Lord is risen again!'^ top 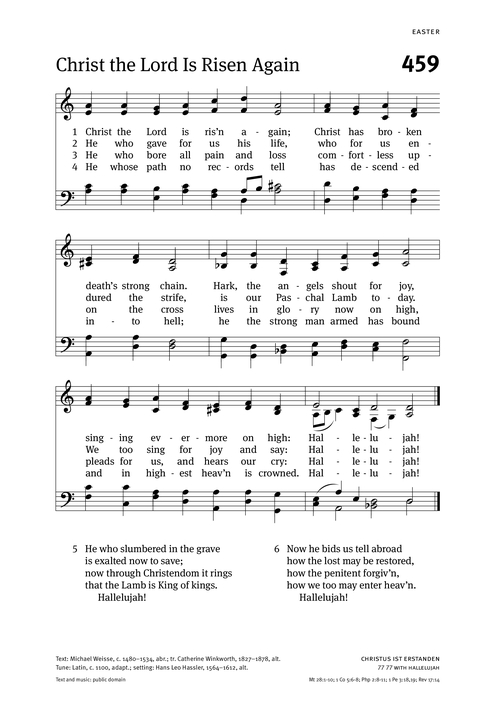 Ancient and Modern #200a

Ancient and Modern #200b

Great Songs of the Church (Revised) #247

The New English Hymnal #105a

The New English Hymnal #105b