Deck thyself, my soul, with gladness

Deck thyself, my soul, with gladness, Leave the gloomy haunts of sadness

1 Deck thyself, my soul, with gladness,
leave the gloomy haunts of sadness;
come into the daylight's splendour,
there with joy thy praises render
unto him whose grace unbounded
hath this wondrous banquet founded:
high o'er all the heavens he reigneth,
yet to dwell with thee he deigneth.

2 Now I sink before thee lowly,
filled with joy most deep and holy,
as with trembling awe and wonder
on thy mighty works I ponder:
how, by mystery surrounded,
depth no mortal ever sounded,
none may dare to pierce unbidden
secrets that with thee are hidden.

3 Sun, who all my life dost brighten,
light, who dost my soul enlighten,
joy, the sweetest heart e'er knoweth,
fount, whence all my being floweth,
at thy feet I cry, my Maker,
let me be a fit partaker
of this blessed food from heaven,
for our good, thy glory, given.

4 Jesus, Bread of Life, I pray thee,
let me gladly here obey thee;
never to my hurt invited,
be thy love with love requited:
from this banquet let me measure,
Lord, how vast and deep its treasure;
through the gifts thou here dost give me,
as thy guest in heaven receive me.

Source: Ancient and Modern: hymns and songs for refreshing worship #440

Johann Franck (b. Guben, Brandenburg, Germany, 1618; d. Guben, 1677) was a law student at the University of Köningsberg and practiced law during the Thirty Years' War. He held several positions in civil service, including councillor and mayor of Guben. A significant poet, second only to Paul Gerhardt in his day, Franck wrote some 110 hymns, many of which were published by his friend Johann Crüger in various editions of the Praxis Pietatis melica. All were included in the first part of Franck’s Teutsche Gedichte bestehend im geistliche Sion (1672). Bert Polman… Go to person page >
^ top

The first stanza of "Schmücke dich, O liebe Seele" by Johann Franck was published in Johann Crüger's Geistliche Kirchen-Melodien (1649). Crüger and C. Runge published the complete hymn in nine stanzas in their 1653 Gesangbuch. The hymn has since appeared in virtually all German hymnals and in many English language ones. The English text in the Psalter Hymnal is a revision of select stanzas from two translations by Catherine Winkworth (PHH 194), one published in her Lyra Germanica (2nd series, 1858) and the other in her Chorale Book far England (1863). Winkworth's first line read "Deck thyself, my soul, with gladness."

The dominant tone of this text is one of deep joy enhanced by a sense of awe. We express joy and praise for "this wondrous banquet" (st. 1), and we show reverence in receiving Christ (st. 2). Thankful for "heavenly food" and drink (st. 3), we rejoice in Christ's love for us and in its power to unite us (st. 4). Often considered the best and most popular of the Lutheran chorales for the Lord's Supper, this text, according to John Julian,

is an exhortation to the soul to arise and draw near to partake of the Heavenly Food and to meditate on the wonders of Heavenly Love; ending with a prayer for final reception at the Eternal Feast.
-A Dictionary of Hymnology (2nd ed., 1907), p. 1014

Johann Franck (b. Guben, Brandenburg, Germany, 1618; d. Guben, 1677) was a law Student at the University of Köningsberg and practiced law during the Thirty Years' War. He held several positions in civil service, including councillor and mayor of Guben. A significant poet, second only to Paul Gerhardt (PHH 331) in his day, Fran wrote some 110 hymns, many of which were published by his friend Johann Cruüer in various editions of the Praxis Pietatis melica. All were included in the first part of Franc Teutsche Gedichte bestehend im geistliche Sion (1672).

Liturgical Use:
Lord's Supper–probably most effective during distribution of the bread and wine.

Johann Crüger (PHH 42) composed SCHMÜCKE DICH for Franck's text and first published the tune as a setting for Franck's first stanza in Geistliche Kirchen-Melodien. The tune name is the incipit of the original German text. Johann S. Bach (PHH 7) used this tune in his Cantata 180; he and many other…

All tunes published with 'Deck thyself, my soul, with gladness'^ top 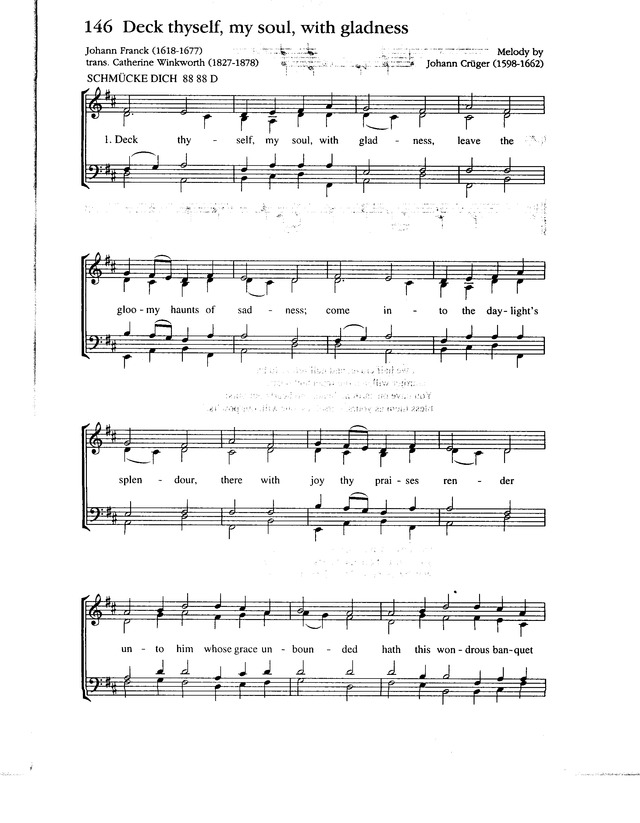