Let all mortal flesh keep silence, and with fear and trembling stand

1 Let all mortal flesh keep silence
and with fear and trembling stand;
ponder nothing earthly-minded,
for with blessing in his hand
Christ, our God, to earth descending,
comes our homage to command.


2 King of kings, yet born of Mary,
as of old on earth he stood,
Lord of lords in human likeness,
in the body and the blood
he will give to all the faithful
his own self for heav’nly food.


3 Rank on rank the host of heaven
spreads its vanguard on the way
as the Light from Light, descending
from the realms of endless day,
comes the pow’rs of hell to vanquish
as the darkness clears away.


4 At his feet the six-winged seraph,
cherubim with sleepless eye,
veil their faces to the presence
as with ceaseless voice they cry:
“Alleluia, alleluia!
Alleluia, Lord Most High!”

Moultrie, Gerard, M.A., son of the Rev. John Moultrie, was born at Rugby Rectory, Sept. 16, 1829, and educated at Rugby and Exeter College, Oxford (B.A. 1851, M.A. 1856). Taking Holy Orders, he became Third Master and Chaplain in Shrewsbury School; Chaplain to the Dowager Marchioness of Londonderry, 1855-59; curate of Brightwaltham, 1859; and of Brinfield, Berks, 1860; Chaplain of the Donative of Barrow Gurney, Bristol, 1864: Vicar of Southleigh, 1869, and Warden of St. James's College, Southleigh,1873. He died April 25, 1885. His publications include: 1) The Primer set forth at large for the use of the Faithful. In Family and Private Prayer. Edited from the Post Reformation editions, 1864. (2) Hymns and Lyrics for the Seasons and Saint… Go to person page >
^ top

Evidence suggests that the Greek text of "Let All Mortal Flesh" may date back to the fifth century. The present text is from the Liturgy of St. James, a Syrian rite thought to have been written by St. James the Less, first Bishop of Jerusalem. It is based on a prayer chanted by the priest when the bread and wine are brought to the table of the Lord.

The text expresses awe at Christ's coming (st. 1) and the mystery of our perception of Christ in the body and blood (st. 2). With images from Isaiah 6 and Revelation 5, it portrays the glory of Christ (sung to by angels) and his victory over sin (st. 3-4). Although it has eucharistic emphasis, the text pictures the nativity of Christ in a majestic manner and in a much larger context than just his birth in Bethlehem. We are drawn into the awe and mystery with our own alleluias."

Gerard Moultrie (b. Rugby, Warnickshire, England, 1829; d. Southleigh, England, 1885) translated the text from the Greek; his English paraphrase was first published in Orby Shipley's Lyra Eucharistica (1864) and entitled "Prayer of the Cherubic Hymn." The Psalter Hymnal alters that paraphrase in part to solve Reformed sensitivities about eucharistic theology. Moultrie's great-grandfather had settled in South Carolina, but after siding with England during the American Revolution, he had moved back to Britain. Educated at Exeter College, Oxford, England, Moultrie served as a pastor and chaplain in the Church of England. In addition to writing his own hymns he prepared translations of Greek, Latin, and German hymns. He also edited several hymnals, including Hymns and Lyrics for the Seasons and Saints' Days (1867) and Cantica Sanctorum or Hymns for the Black Letter Saints' Days in the English and Scottish Calendars (1880).

Liturgical Use:
Ideal to use during Lord's Supper services at Christmastime, but may be used at any time during the Christmas season; Lord's Supper at other times of the church year (especially as a sung part of the Great Prayer of Thanksgiving at the beginning of the eucharistic liturgy).

One of the lesser sung Christmas hymns, this paraphrase of Gerard Moultrie is based on a text that has been used by the church since the late fourth century: the Liturgy of St. James. Moultrie’s words come from a part of that liturgy known as the Cherubic Hymn, which would be chanted as the bread and wine of Holy Eucharist were brought forward. This old text evokes a sense of majesty at the incarnation of Christ, and the slow, almost chant-like melody in a minor tone wonderfully expresses that awe and mystery. We come before Christ in silence and in awe to reflect upon the mystery of the incarnation, joined even by the hosts of heaven to witness the miracle. Singing this hymn, one can imagine him or herself standing in the stable, angels above, in reverent silence to worship the King, born a child to banish the darkness away.

Though the exact words of this Christmas hymn come from the nineteenth century, they are based on one of the oldest texts still used by the church - the Liturgy of St. James. The actual date and authorship of the Liturgy are disputed. It is associated with St. James the Less, one of the twelve apostles, and some claim he wrote it as early as 60 AD. Others note the similarities in the text between this liturgy and that of St. Cyril of Jerusalem in the fourth century, and argue that the liturgy must have been written later. Regardless of when the Liturgy was written, it was produced for use in the Jerusalem church near the end of the fourth century or beginning of the fifth. In the early fifth century, it became the primary liturgy of both Jerusalem and Antioch, and we now know it as the Liturgy of St. James (John Witvliet - "Antiphon of St. James").

Part of the liturgy, known as the Cherubic Hymn, is a prayer chanted by the priest when the bread and wine are brought to the table of the Lord. Near the middle of the nineteenth century, Gerard Moultrie translated the text of this Hymn from Greek, and published a paraphrase under the name “Prayer of the Cherubic Hymn.” Today we know this hymn as “Let All Mortal Flesh Keep Silence.”

The text has stayed much the same in all hymnals that use it. Some Reformed hymnals, such as the Psalter Hymnal, have edited the text to address some sensitivities about Eucharistic theology. Other hymnals have altered words that wouldn’t be commonly understood; both of these changes amount to a few words in every verse. The biggest change comes from the Baptist Hymnal, which omits the second verse, “King of Kings, yet born of Mary.”

The tune to which Moultrie’s text is set is PICARDY, a French carol dating from the seventeenth century, and taken from the song book Chansons Populaires des Provinces de France, published in 1860 – four years before the hymn was first published in Britain in 1864. Every hymnal uses this tune, most in the key of F.

The minor tonality of this tune perfectly expresses the sense of awe and majesty that the text evokes. To follow the text, it is best to begin the hymn with limited instrumentation, and build throughout until the declaration of the “Alleluias.” Make sure though that even with limited instrumentation, you have something underneath to sustain the vocals (such as organ synth or strings). Here are some examples:

The hymn has Eucharistic emphasis, but it paints a much broader picture of the nativity of Christ. As such, it is ideal to use this hymn during the Lord’s Supper at Christmastime, but it can also be used throughout the Christmas season or during Communion throughout the year, particularly as the Great Prayer of Thanksgiving. 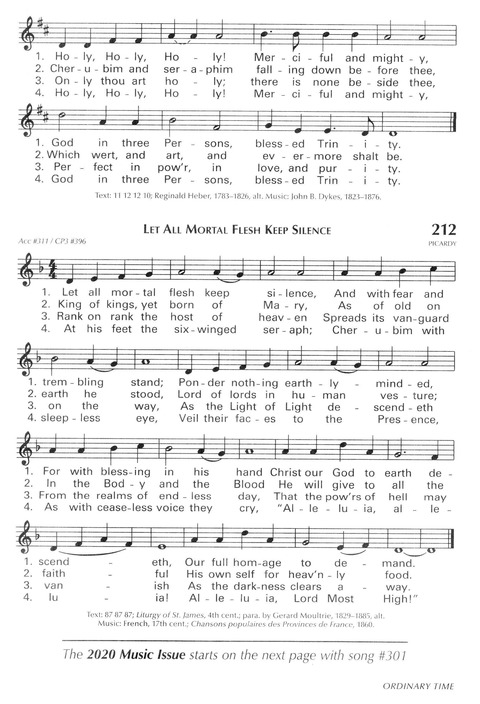 Great Songs of the Church (Revised) #386

Hymns for a Pilgrim People #142

Hymns of the Christian Life #428