Hail the day that sees Him rise

1 Hail the day that sees him rise, Alleluia!
to his throne beyond the skies. Alleluia!
Christ, the Lamb for sinners given, Alleluia!
enters now the highest heaven. Alleluia!


2 There for him high triumph waits; Alleluia!
lift your heads, eternal gates. Alleluia!
He has conquered death and sin; Alleluia!
take the King of glory in. Alleluia!


3 Highest heaven its Lord receives; Alleluia!
yet he loves the earth he leaves. Alleluia!
Though returning to his throne, Alleluia!
still he calls us all his own. Alleluia!


4 Still for us he intercedes; Alleluia!
his atoning death he pleads, Alleluia!
near himself prepares our place, Alleluia!
he the firstfruits of our race. Alleluia!


5 There we shall with you remain, Alleluia!
partners of your endless reign, Alleluia!
see you with unclouded view, Alleluia!
find our heaven of heavens in you. Alleluia!

Considered to be the most popular of all Ascension texts in English-language worship, "Hail the Day" was written by Charles Wesley (PHH 267) in ten stanzas and published in his Hymns and Sacred Poems (1739). Thomas Cotterill (b. Cannock, Staffordshire, England, 1779; d. Sheffield, Yorkshire, England, 1823) altered the text and published his version in Selection of Psalms and Hymns (1820); the "alleluias" were added in George White's Hymns and Introits (1852). Included here with further alterations are original stanzas 1, 2, 4, 6, and 10.

"Hail the Day" sings out its "alleluias" for Christ's triumphal entry into glory after he accomplished his saving work on earth (st. 1-2) and for Christ's work of interceding and preparing a place for his people (st. 3-4). The text concludes by hailing the great day when we shall rule with Christ (st. 5).

Thomas Cotterill studied at St. John's College, Cambridge, England, and became an Anglican clergyman. A central figure in the dispute about the propriety of singing hymns, Cotterill published a popular collection of hymns (including many of his own as well as alterations of other hymns), Selection of Psalms and Hymns in 1810. But when he tried to introduce a later edition of this book in Sheffield in 1819, his congregation protested. Many believed strongly that the Church of England should maintain its tradition of exclusive psalm singing. In a church court the Archbishop of York and Cotterill reached a compromise: the later edition of Selection was withdrawn, and Cotterill was invited to submit a new edition for the archbishop's approval. The new edition was published in 1820 and approved as the first hymnal for the Anglican church of that region. Cotterill's suppressed book, however, set the pattern for Anglican hymnals for the next generation, and many of its hymns are still found in modern hymnals.

Liturgical Use:
Ascension; other services that emphasize Christ's reign.

"Hail the day that sees Him rise,
Ravish'd from our wishful eyes!
Christ, awhile to mortals given,
Re-ascends His native heaven."

"Still for us He intercedes ;
Prevalent His death He pleads."

3. An abbreviated text, given in Madan's Psalms & Hymn, 1760, No. 23, in 4 stanzas of 8 lines. In this stanzas ii. and v. are omitted, and the alterations as in Whitefield are adopted. This has been repeated in several collections, both old and new, including the Dutch Reformed Hymns of the Church, N. Y., 1869, No. 187. In this last case the original reading (altered in Whitefield) is restored.
4. The most popular form of the hymn dates from 1820. In that year it was given in the 9th edition of Cotterill's Selection, No. 106, as follows (the italics being Cotterill's alterations):—

1. "Hail the day that sees Him rise,
Glorious to His native skies!
Christ awhile to mortals given,
Enters now the highest heaven.
2. "There the glorious triumph waits;
Lift your heads, eternal gates!
Christ hath vanquish'd death and^sin,
Take the King of glory in.
3. "See, the heaven its Lord receives!
Yet He loves the earth He leaves;
Though returning to His throne,
Still He calls mankind His own.
4. "Still for us He intercedes;
His prevailing death He pleads;
Near Himself prepares our place,
Harbinger of human race.
5. "O though parted from our sight
Far above yon azure height,
Grant our hearts may thither rise,
Seeking Thee above the skies."

This text was repeated almost verbatim in Bickersteth's Christian Psalmody, 1833; Elliott's Psalms & Hymns, 1835; and others down to 1852, when, in the Rev. G. C. White's Introits and Hymns, the "Hallelujah " refrain was added to each verse. This form of the text, with the addition in some cases, as in Hymns Ancient & Modern, of stanza v. of the original ("See! He lifts His hands above "), is very popular, and is found in the Hymnary, 1872; Hymns Ancient & Modern, 1861 & 1875; Thring's Collection, 1882; the Universal Hymn Book, 1885; and others. It is By C. Wesley, 1739; G. Whitefield, 1753; T. Cotterill, 1820; and G. C. White, 1852.
5. The text of the Hymnal Companion, 1870 and 1876, is from the original with the "Hallelujah" refrain, and the change in stanza ii., line 1, of "pompous" to "glorious" and stanza vi., line 1, "Grant” to “Lord."
6. In the Salisbury Hymn Book, 1857, No. 106. A cento from the original, the Cotterill-White, text, and others, together with a doxology, was given as "Hail the day that sees Him go." This was replaced by the original, in the Sarum Hymnal 1868,
7. The Society for Promoting Christian Knowledge Church Hymns, 1871, omits stanza iii. and vi. of the original, and gives variations from Gotterill and others.
8. In the 1863 edition of the S. P. C. K. Psalms & Hymns No. 230, there is a cento of which stanzas i.-iv. are altered from Wesley, and v., vi. are new to the hymn. It begins, "Master, Lord, to Thee we cry."
9. The American collections usually follow those of Great Britain in its various forms, and the source of each text can be determined by the foregoing annotations. In the Church Pastorals, Boston, 1864, No. 76, as "Master, may we ever say," is composed of stanzas vii.-x.
10. Several hymn-books also present slight variations either from the original, or from one of the altered forms, but these are too minute and numerous to give in detail.
When all its various forms are taken into account, this hymn ranks as one of the three hymns by C. Wesley which of all his compositions have attained to the greatest popularity. The other two are,"Hark! the herald angels sing," and "Jesu, lover of my soul."

This hymn elaborates on the royalty and sovereignty of the ascended Christ, to which Mark alluded in his gospel: “So then the Lord Jesus, after he had spoken to them, was taken up into heaven and sat down at the right hand of God” (Mark 16:19 ESV). The second stanza refers to one of the royal psalms: “Lift up your heads, O gates! And lift them up, O ancient doors, that the King of glory may come in” (Psalm 24L9 ESV).

Charles Wesley wrote this text in ten stanzas with the title “Hymn for Ascension Day.” He and his brother John published it in Hymns and Sacred Poems in 1739. Over the years, many substantial alterations have been made to the text. Thomas Cotterill significantly changed the text for publication in his Selection of Psalms and Hymns of 1820. The “alleluias” were added over a century after the hymn was written – in 1852 in G. C. White's Hymns and Introits.

Another substantial change is the omission of certain stanzas. Wesley's third and ninth stanzas are never used in modern hymnals, and his seventh and eighth are rarely included. The most common text includes the original stanzas 1, 2, 4, and 5 – “Hail the day that sees him rise,” “There the glorious triumph waits,” “See, the heav'n its Lord receives,” and “See, he lifts His hands above.” (The first line of Wesley's stanza 4 originally read “Him though highest heaven receives.” This line is often altered in modern hymnals to read “Highest heaven its Lord receives,” or more commonly, “See, the heav'n its Lord receives.”)

This hymn is usually sung to the Welsh tune LLANFAIR, which is often attributed to the blind singer Robert Williams, though scholars have some doubts about his authorship. It was first published in 1837 by John Parry in Peroriaeth Hyfryd (Sweet Music). LLANFAIR was first paired with “Hail the Day” in the English Hymnal of 1906. The tune name comes from a village on the island of Anglesey.

Three of the four phrases are identical; they rise melodically during the words of the stanzas and fall for the “alleluia.” The third phrase is different; it falls, then rises. Overall, the tune is easy to sing, partly due to its repetition, and partly because it is built on the pitches of the tonic triad.

This hymn was written for Ascension Day, but it is also suitable for any service with a theme of Christ's royalty or sovereignty. It could be combined with “Crown Him with Many Crowns,” which has a similar theme. The tone of both the words and the melody call for joyful instrumental settings. These can, of course, be for instruments alone, as the handbell arrangement in the reproducible collection “From the Cross to the Crown” or the organ postlude in “Sacrifice and Splendor,” or for congregational or choral accompaniment, as in the regal, uncomplicated setting for organ (or piano) and optional brass, “Hail the Day That Sees Him Rise.” 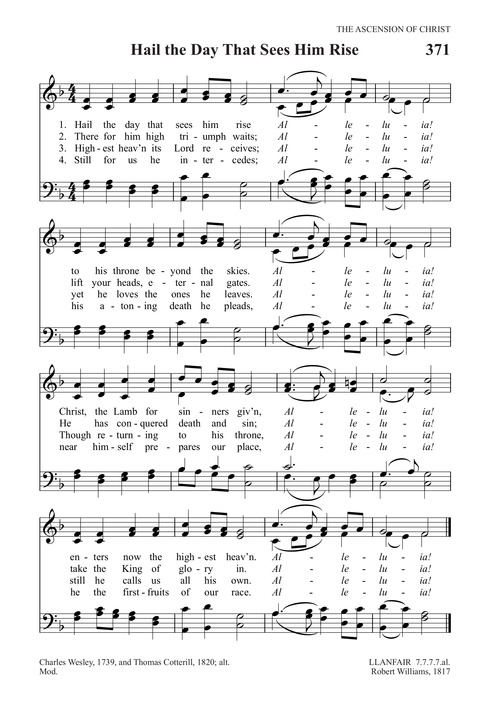 Great Songs of the Church (Revised) #236

The Hymnal for Worship and Celebration #232

The New English Hymnal #130a

The New English Hymnal #130b