Crown Him with Many Crowns

Crown Him with many crowns

1 Crown him with many crowns,
the Lamb upon his throne.
Hark! how the heavenly anthem drowns
all music but its own.
Awake, my soul, and sing
of him who died for thee,
and hail him as thy matchless king
through all eternity.


2 Crown him the Lord of life,
who triumphed o'er the grave,
and rose victorious in the strife
for those he came to save;
his glories now we sing
who died and rose on high,
who died eternal life to bring,
and lives that death may die.


3 Crown him the Lord of love;
behold his hands and side,
rich wounds, yet visible above,
in beauty glorified;
no angels in the sky
can fully bear that sight,
but downward bends their burning eye
at mysteries so bright.


4 Crown him the Lord of years,
the potentate of time,
creator of the rolling spheres,
ineffably sublime.
All hail, Redeemer, hail!
for thou hast died for me;
thy praise shall never, never fail
throughout eternity.

Godfrey Thring (b. Alford, Somersetshire, England, 1823; d. Shamley Green, Guilford, Surrey, England, 1903) was born in the parsonage of Alford, where his father was rector. Educated at Balliol College, Oxford, England, he was ordained a priest in the Church of England in 1847. After serving in several other parishes, Thring re­turned to Alford and Hornblotten in 1858 to succeed his father as rector, a position he retained until his own retirement in 1893. He was also associated with Wells Cathedral (1867-1893). After 1861 Thring wrote many hymns and published several hymnals, including Hymns Congregational (1866), Hymns and Sacred Lyrics (1874), and the respect­ed A Church of England Hymn Book Adapted to the Daily Services of the Church… Go to person page >
^ top

Crown Him with many crown. [Christ the King.] Four hymns are found in common use, each of which opens with this stanza. They are:—
1. By Matthew Bridges, which appeared in his Hymns of the Heart, 2nd ed., 1851, p. 58, in 6 stanzas of 8 lines, and headed, "In capito ejus diademata multa. Apoc. xix. 12." This was repeated in his Passion of Jesus, 1852, p. 62, where the title runs, "Third Sorrowful Mystery, Song of the Seraphs. Apoc. xix. 12." In treatment and expression it has a more than slight resemblance to Kelly's "Look, ye saints, the sight is glorious" (q. v.). With alterations, and sometimes abbreviations, it appeared for congregational use in the People's Hymnal, 1867; Hymns Ancient & Modern, 1868 and 1875; Sarum, 1868; Hymnary, 1872; Hymnal Companion, and others.
2. In the Appendix to the Society for Promoting Christian KnowledgePsalms and Hymns, 1869, there aro 10 stanzas of 4 lines, of which 8 stanzas are from M. Bridges, and 2, i.e. stanzas vii. and viii., "Crown Him the Lord of Might," &c, are by another hand.
3. In S. P. C. K. Church Hymns, 1871, we have a cento based upon Bridges's text, and thus composed, i. Bridges; ii.-iii. Bridges altd.; iv. Rev. G. Thring; v. Bridges altd.; vi. from S. P. C. K. as above; vii. 11. 1-4, Rev. G. Thring; lines 5-8, Bridges.
4. The hymn opening with the same stanza in Thring's Collection, 1882, is practically new, the first stanza and line1 of the 5th being all that have been adopted from M. Bridges. Its original form in which it first appeared was, "Crown Him with crowns of gold." (In the American College Hymnal, N.Y., 1876.) This was in Mr. Thring's Hymns and Sacred Lyrics, 1874, p. 75, that portion of it contained in the Church Hymns, as noted above, having previously appeared in that collection. In 1880, on being transferred to Mr. Thring's Collection, M. Bridges's opening stanza was substituted for the original in order to retain those fine lines:—

"Hark! how the heavenly anthem drowns
All music but its own."

A portion of the original hymn is sometimes given in American hymnals as, "Awake, my soul, and sing." It begins with line 5 of stanzas i., and is No. 272 in the Baptist Hymn and Tune Book Philadelphia, 1871

Composed for Bridges's text by George J. Elvey (PHH 48), DIADEMATA was first published in the 1868 Appendix to Hymns Ancient and Modern. Since that publication, the tune has retained its association with this text. The name DIADEMATA is derived from the Greek word for "crowns." The tune is lively an…

All tunes published with 'Crown Him with Many Crowns'^ top

One of the most effective and simple costume changes is to put on a hat. When you walk off stage and return wearing a top hat, you are suddenly a different person. A “man of many hats” is someone who can be a different person in different contexts or crowds. This hymn declares that we are to crown our Lord with many crowns, but this does not mean that Jesus is a “man of many hats.” Christ was not simply a prophet, He was not simply the carpenter’s son, and He was not simply human, nor simply divine. Rather, this call to “crown him with many crowns” is a simple and yet profound declaration that Christ is many things, and everything. He is Lord of all, to be crowned for many things that all add up to Him being Savior of the world. Each crown represents a different aspect of who Christ is – Lord of life, Lord of love, Lord of years, Lord of heaven, the Lamb upon the throne. Christ is King, Servant, Lamb, Shepherd, and we celebrate this all-encompassing, paradoxical nature of our Savior by crowning Him the Lord of all.

The original text was written by Matthew Bridges, and later revised in his second edition of Hymns of the Heart, published in 1851. Another text was written by Godfrey Thring, who wrote, “The greater part of this hymn was originally written at the request of the Reverend H. W. Hutton, to supply the place of some of the stanzas in Matthew Bridges’ well-known hymn, of which he and others did not approve; it was afterwards thought better to rewrite the whole, so that the two hymns might be kept entirely distinct” (Lutheran Hymnal Handbook). Thring’s original second verse is now commonly paired with Bridges’ original stanzas.

There are a great number of variations of this hymn text. Almost no two hymnals include the exact same arrangement of phrases or number/order of verses. It’s difficult even to say what the most common verses are, so simply be aware that texts differ and make sure to double check the commonality if you’re using copies of the hymn from multiple sources.

DIADEMATA was composed for this text by George J. Elvey in 1868. Albert Bailey writes, “This is another of those hymns that can be sung at different paces, but which don’t lend themselves to changes in volume. Rather, Crown Him…builds with pomp, the second half of each verse making you want to stand to sing” (The Gospel in Hymns, 76). Accompany this hymn with firm organ, piano, and trumpets, or with a driving drum beat and acoustic/electric guitar.

This hymn is perhaps most popular at Easter, but it would be fitting during any time of festivity or celebration of Christ’s rule, whether that be Easter, Ascension Day, or Christ the King Sunday. The hymn is a particularly fitting opening hymn of praise or processional. This hymn could be paired with “All Hail King Jesus,” “All Glory Laud and Honor,” or “All Hail the Power of Jesus Name,” just to name a few. 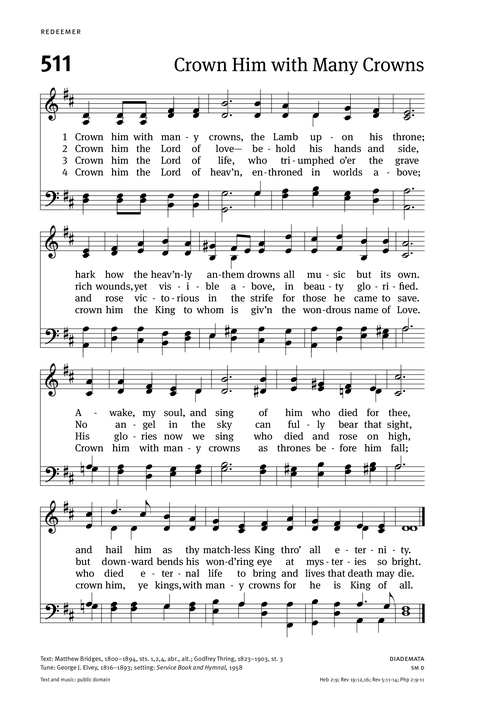 A New Hymnal for Colleges and Schools #14

Hymns for a Pilgrim People #58

Hymns In The Vineyard #76

Display Title: CROWN HIM WITH MANY CROWNS/NOTHING BUT THE BLOOD First Line: Crown Him with many crowns, The lamb upon His throne Date: 1999
Hymns In The Vineyard #76

Hymns of the Christian Life #117

The Book of Hymns (A fresh anthology of favourite hymns) #37

Display Title: Crown Him with Many Crowns First Line: Crown Him with many crowns, the Lamb upon His throne Tune Title: DIADEMATA Author: Godfrey Thring; Matthew Bridges Date: 2006
The Christian Life Hymnal #46

The Hymnal for Worship and Celebration #234

The Song Book of the Salvation Army #156

Include 635 pre-1979 instances
All instances^ top
Suggestions or corrections? Contact us