Praise to God for His Goodness and Truth 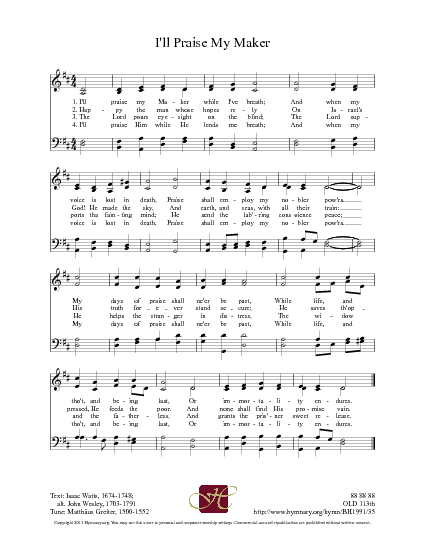 I'll praise my Maker with my breath

1 I'll praise my Maker while I've breath;
and when my voice is lost in death,
praise shall employ my nobler powers.
My days of praise shall ne'er be past
while life and thought and being last,
or immortality endures.


2 How happy they whose hopes rely
on Israel's God, who made the sky
and earth and seas with all their train;
whose truth forever stands secure,
who saves the oppressed and feeds the poor,
and none shall find God's promise vain.


3 The Lord pours eyesight on the blind;
the Lord supports the fainting mind
and sends the laboring conscience peace.
God helps the stranger in distress,
the widowed and the parentless,
and grants the prisoner sweet release.


4 I'll praise my Maker while I've breath;
and when my voice is lost in death,
praise shall employ my nobler powers.
My days of praise shall ne'er be past
while life and thought and being last,
or immortality endures.

I'll praise my Maker with my [while I've] breath. I. Watts. [Ps. cxlvi.] First published in his Psalms of David, &c., 1719, in 6 stanzas of 6 lines, and headed, “Praise to God for His Goodness and Truth." It is sometimes given in this form: but the more popular arrangement, which is in extensive use in all English-speaking countries, is that by J. Wesley, beginning, "I'll praise my Maker while I've breath." This is composed of stanzas i., iii., iv. and vi. somewhat altered. It appeared in Wesley's Psalms & Hymns, Charlestown, South Carolina, 1736-7; was repeated in the Wesley Psalms & Hymns, 1743, and in the Festival Hymnal, 1780. Another arrangement is, "Happy the man whose hopes rely." This is composed of stanzas iii., iv., and vi. somewhat altered, and was given in Cotterill’s Selection, 1810. Neither the original nor the arrangements by Wesley and by Cotterill have the doxology which is found in some collections.

Harmonia Americana: containing a concise introduction to the grounds of music; with a variety of airs, suitable fore divine worship and the use of musical societies; consisting of three and four parts #31 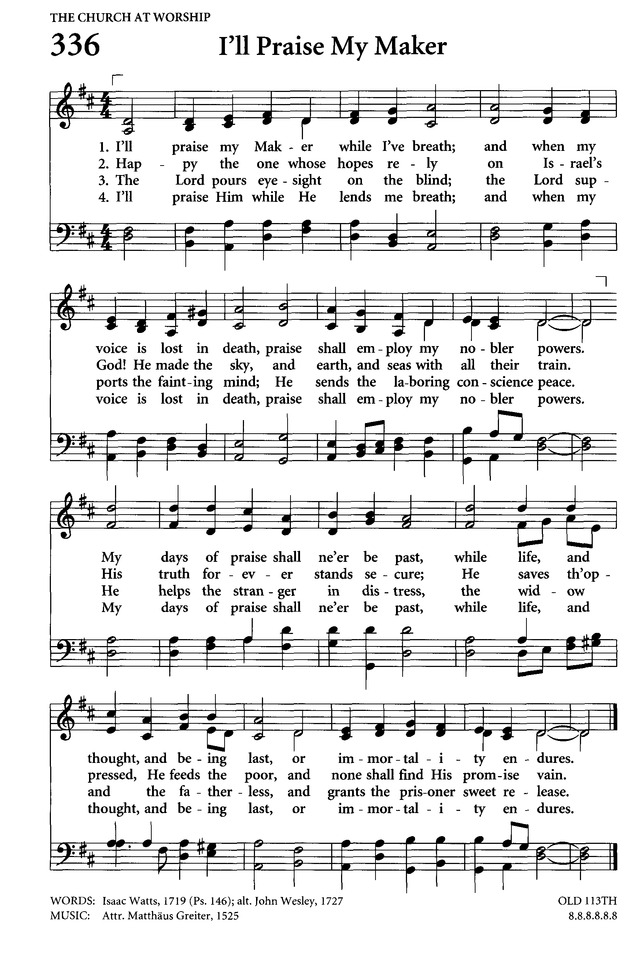 A New Hymnal for Colleges and Schools #3

Psalms for All Seasons #146A