Lead on, O King Eternal, The day of march has come

1 Lead on, O King eternal,
the day of march has come;
henceforth in fields of conquest
your tents will be our home.
Through days of preparation
your grace has made us strong;
and now, O King eternal,
we lift our battle song.


2 Lead on, O King eternal,
till sin's fierce war shall cease,
and holiness shall whisper
the sweet amen of peace.
For not with swords' loud clashing
or roll of stirring drums
with deeds of love and mercy
the heavenly kingdom comes.


3 Lead on, O King eternal;
we follow, not with fears,
for gladness breaks like morning
where'er your face appears.
Your cross is lifted o'er us,
we journey in its light;
the crown awaits the conquest;
lead on, O God of might.

Before studying at Andover, Ernest W. Shurtleff (Boston, MA, 1862; d. Paris, France, 1917) attended Harvard University. He served Congregational churches in Ventura, California; Old Plymouth, Massachusetts; and Minneapolis, Minnesota, before moving to Europe. In 1905 he established the American Church in Frankfurt, and in 1906 he moved to Paris, where he was involved in student ministry at the Academy Vitti. During World War I he and his wife were active in refugee relief work in Paris. Shurtleff wrote a number of books, including Poems (1883), Easter Gleams (1885), Song of Hope (1886), and Song on the Waters (1913). Bert Polman… Go to person page >
^ top

With the encouragement of his fellow graduating classmates, Ernest W. Shurtleff (Boston, MA, 1862; d. Paris, France, 1917) wrote this text in 1887 for Andover Theological Seminary's commencement ceremonies. Winning immediate acclaim, the text was published in Shurtleff's Hymns of the Faith that same year. Since that publication it has appeared in many American hymnals.

Graduation is one milestone on our life's journey, a road sign that points to the future as much as it marks the end of formal education. Consequently, "Lead On, O King Eternal" is a battle call to go forward in Christian service. Initially laced with war imagery, the text moves on to biblical imagery-"deeds of love and mercy"-and concludes with a note of eschatological hope. This message is as urgent today as it was a hundred years ago.

Before studying at Andover, Shurtleff attended Harvard University. He served Congregational churches in Ventura, California; Old Plymouth, Massachusetts; and Minneapolis, Minnesota, before moving to Europe. In 1905 he established the American Church in Frankfurt, and in 1906 he moved to Paris, where he was involved in student ministry at the Academy Vitti. During World War I he and his wife were active in refugee relief work in Paris. Shurtleff wrote a number of books, including Poems (1883), Easter Gleams (1885), Song of Hope (1886), and Song on the Waters (1913).

Liturgical Use:
A fine recessional hymn; appropriate many other times of worship, including ordination/ commissioning, church education graduations, and occasions that mark the beginning of a church program.

All tunes published with 'Lead on, O King Eternal'^ top

In his book, The Gospel in Hymns, Albert Bailey describes very eloquently the function of this hymn when he writes, “It is the eager cry of the knight who has been kneeling through the hours of darkness in vigil at the altar where his sword and armor are being impregnated with the power of heaven, and who now with the dawn rises to receive the accolade of his King and goes forth to combat.” We probably don’t think about our faith like this too often. Quite frankly, we most likely don’t know how to make sense of this. How do we reconcile between the peaceful Christ and the seemingly war-driven God of the Old Testament? How can we claim to desire a world of peace when we talk in such violent language? These are questions Christians around the world wrestle with. But we shouldn’t stay away from such language because we don’t fully understand it. Part of our task is to remember that language is just that - only words. We talk in imagery. When we say we are putting on the armor of God, we know that we are clothing ourselves with love, righteousness, and good deeds. When we invoke the God of conquest, we know we are asking God to use us in a fight against spiritual evils, not physical. Perhaps the second verse of this hymn says it best: “For not with sword’s loud clashing / or roll of stirring drums / with deeds of love and mercy / the heavenly kingdom comes.”

This hymn was written by Ernest W. Shurtleff in 1887 for Andover Theological Seminary’s commencement ceremonies. It was published that same year. The text is initially full of battle imagery, and the second verse begins to tell us what we are at war against, namely, the powers of sin. The third verse points to the hope we have in Christ’s ultimate victory. While Shurtleff’s text might have been written specifically for those entering pastoral ministry, as Albert Bailey writes, “It is the battle-plan for humanity” (The Gospel in Hymns, 549).

The text has remained mostly unchanged since its composition. The only differences lie in the modernization of language, changing “thee” to “you,” etc.

The rousing marching tune LANCASHIRE was composed by Henry T. Smart and set to Shurtleff’s text in 1905. It is an easy melody to pick up, and is most effective with a strong accompaniment, whether that be organ, firm piano, or brass. This song was written for young people, and it remains a popular choice at youth camps and young people’s worship gatherings, due in part to a new tune composed by Enfield. The band has also written a new refrain for the hymn: “Lead on, lead on king of heaven / my light and my salvation / your faithfulness endures. Lead on, lead us to your kingdom / through joy or tribulation /we follow you, we follow you alone.” Indelible Grace also has a new tune written by Jeff Pardo – this will need some transposition however, as the key puts the melody very high!

This hymn could be sung during any service of “beginning.” Ordination and commissioning services, as well as occasions that mark the beginning of a church/school year or program would be perfect opportunities to sing the hymn. It could be sung after a time of commissioning, or, when the entire service is themed around God’s guidance, it makes a perfect recessional or closing hymn. Along with the following Bible passages, it would work beautifully to read the Heidelberg Catechism Q & A 123 beforehand (this is a response to the line in the Lord’s Prayer, “Your kingdom come.”) 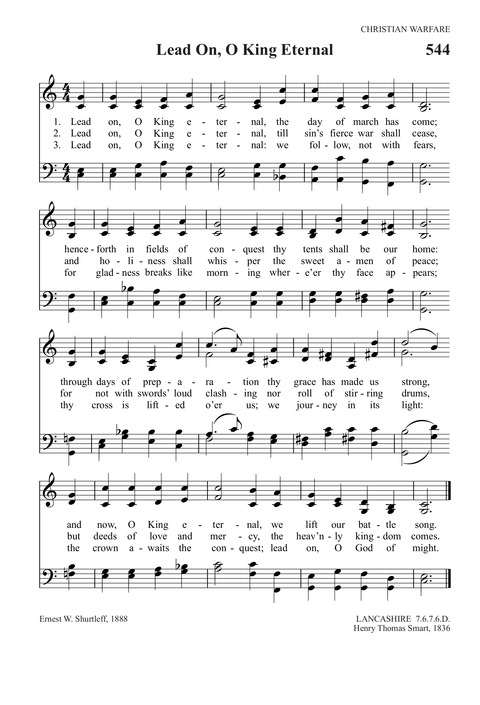 Great Songs of the Church (Revised) #259

Hymns for a Pilgrim People #451

Hymns of the Christian Life #451

The Hymnal for Worship and Celebration #483

Welsh and English Hymns and Anthems #83b