1 Onward, Christian soldiers,
marching as to war,
With the cross of Jesus
going on before!
Christ, the royal Master,
leads against the foe;
Forward into battle,
see his banner go!


Refrain:
Onward, Christian soldiers,
marching as to war,
With the cross of Jesus
going on before!


2 At the sign of triumph
Satan's host doth flee;
On, then, Christian soldiers,
on to victory!
Hell's foundations quiver
at the shout of praise;
Brothers, lift your voices,
loud your anthems raise! [Refrain]


3 Like a mighty army
moves the church of God;
Brothers, we are treading
where the saints have trod;
We are not divided;
all one body we,
One in hope and doctrine,
one in charity. [Refrain]


4 Onward, then, ye people,
join our happy throng,
Blend with ours your voices
in the triumph song;
Glory, laud, and honor,
unto Christ the King;
This thro' countless ages
men and angels sing. [Refrain]

Sabine Baring-Gould (b. Exeter, England, 1834; d. Lew Trenchard, England, 1924), curate of a mission church at Horbury Bridge, Yorkshire, England, wrote this text in 1864 for a children's Pentecost Sunday procession. Baring-Gould said the following about his writing of the text:

For a Whitsuntide [Pentecost] procession it was arranged that our school should join forces with that of a neighboring village. I wanted the children to sing when marching from one village to another, but couldn't think of anything quite suitable, so I sat up at night and resolved to write something myself. "Onward, Christian Soldiers" was the result. It was written in great haste. . . . I am certain that nothing surprised me more than its popularity.

Entitled "Hymn for Procession with Cross and Banners," the text was published in The Church Times (Oct. 15, 1864) in six stanzas and refrain. His stanzas 1, 3, 5-6 are included with small alterations.

As indicated in the refrain, "Onward, Christian Soldiers" is a processional hymn with a cross as the head of the procession (see also 373). It is also a children's hymn; the line in stanza 2 “We are not divided; all one body we” initially referred simply to the children from the several villages (the hymn obviously does not provide a realistic analysis of church unity on a larger scale). And "Onward, Christian Soldiers" is clearly a nineteenth-century text that reveals some of the British triumphalism of that era. Its martial imagery, though drawn from biblical texts such as Ephesians 6:10-18, has often been misinterpreted as militaristic. Thus various opinions exist about the modem usefulness of this text. All agree, however, that stanza 3, which quotes Jesus' promise in Matthew 16:18, is the hymn's finest verse.

Baring-Gould is remembered today especially for this hymn, though he was also the author of some eighty volumes, including books about travel, popular theology, and English folk songs. Educated at Clare College, Cambridge, England, he was a curate and rector in the Church of England. He inherited a large estate but married a mill-hand girl after paying for her education. Many of his hymns were written for the children of his congregations, often for their marches around the village in procession with crosses and banners. Baring-Gould compiled several collections of folk songs, which were an important part of the English folk-music movement, including Songs and Ballads of the West (1889-1891) and A Garland of Country Song (1894).

Liturgical Use:
Services dealing with spiritual warfare, with greatest emphasis on stanzas 3 and 4.

The popularity of this hymn is partly due to ST. GERTRUDE, the marching tune that Arthur S. Sullivan (PHH 46) composed for this text. The tune was published in the Musical Times of December 1871 in an advertisement for Joseph Barnby's (PHH 438) forthcoming Hymnary, which published both text and tune…

The apostle Paul recognized the reality of spiritual warfare when he wrote, “Put on the whole armor of God, that you may be able to stand against the schemes of the devil. For we do not wrestle against flesh and blood, but against the rulers, against the authorities, against the cosmic powers over this present darkness, against the spiritual forces of evil in the heavenly places.” (Ephesians 6:11-12 ESV) It is important to recognize a distinction between spiritual warfare and physical, political warfare. The church universal should oppose war that is sought for human, political reasons, but it cannot avoid fighting evil in all its forms through the armor of God: truth, righteousness, peace, faith, salvation, the Word of God, and prayer (Ephesians 6:14-18).

Sabine Baring-Gould wrote the text in 1865 for a children’s procession for Whitsuntide (Pentecost) in the village of Horbury Bridge, England. It was published later that year in Church Times under the title “'Hymn for Procession with Cross and Banners.” There is a story that low-church Anglican clergy who preferred not to carry the cross in their processions were derided when the end of the refrain was altered to “With the cross of Jesus left behind the door.”

This hymn is most commonly published with four stanzas and the refrain. The first (“Onward, Christian soldiers”) and last (“Onward, then, ye people”) are always included. The original third (“Like a mighty army”) and fifth (“Crowns and thrones may perish”) stanzas are usually included, but the original second stanza (“At the sign of triumph”) is often omitted. The original fourth stanza (“What the saints established”) is always omitted.

The images of war that are heavily prominent throughout this text have provoked some controversy in past decades. This hymn is often seen as promoting militarism and triumphalism. However, it is possible to read the text as a call to the church to fight the forces of evil, which is clearly derived from such scripture passages as Ephesians 6:10-18 and 2 Corinthians 10:3-5.

Arthur S. Sullivan, the composer half of the operetta team Gilbert and Sullivan, wrote ST. GERTRUDE especially for this text. The tune may have been named after Gertrude Clay-Ker-Seymer, a friend of Sullivan. His composing skill is evident in how the tune fits the rhythm and mood of the text, as well as in the details of composition. The tune ST. GERTRUDE is one reason why this hymn came to be so popular.

The harmony of this tune is better suited to instruments than singing. One example is the marching band bass line in the first phrase of the refrain. Unison singing with steady accompaniment works well.

This hymn is appropriate for services on the theme of spiritual warfare. The use of varying instrumentation can affect how the hymn is viewed. If the full congregation is accompanied by full organ or the addition of a brass quartet in an arrangement of “ST. GERTRUDE,” the full martial themes of the text are brought out. However, a solo handbell setting of three hymns on the theme of “Soldier of the Cross,” including “Onward, Christian Soldiers,” features a much smaller ensemble, which moderates the idea of humanity’s power in the fight, and can bring a recognition that power belongs to God. 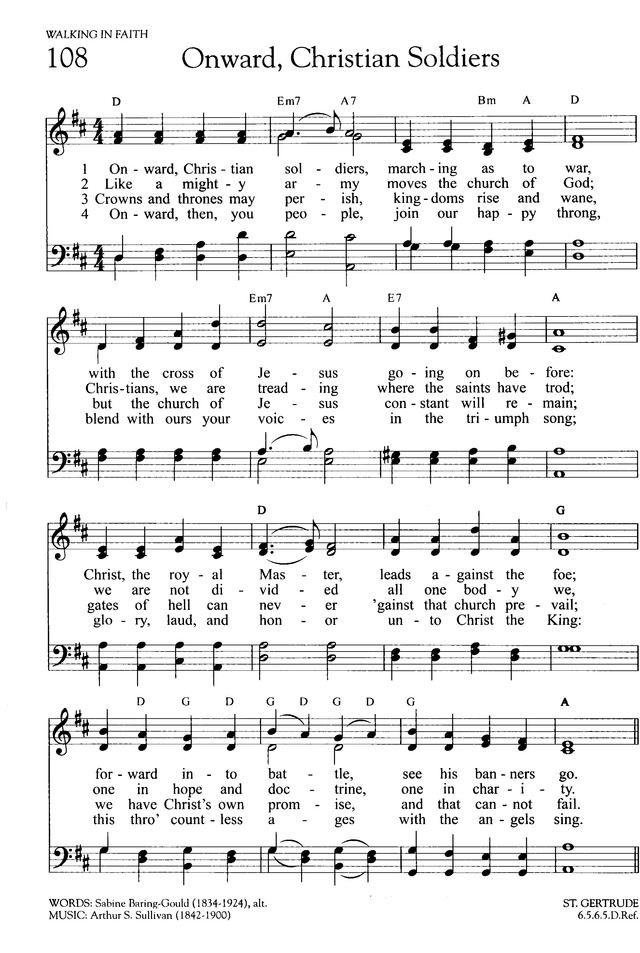 Hymns for a Pilgrim People #449

The Hymnal for Worship and Celebration #479

The Song Book of the Salvation Army #690

Welsh and English Hymns and Anthems #1b

Welsh and English Hymns and Anthems (Reformatted) #1b