My Jesus, I Love Thee

My Jesus, I love Thee, I know Thou art mine

1 My Jesus, I love thee, I know thou art mine;
for thee all the follies of sin I resign;
my gracious Redeemer, my Savior art thou;
if ever I loved thee, my Jesus, 'tis now.


2 I love thee because thou hast first loved me
and purchased my pardon on Calvary's tree;
I love thee for wearing the thorns on thy brow;
if ever I loved thee, my Jesus, 'tis now.


3 I'll love thee in life, I will love thee in death,
and praise thee as long as thou lendest me breath,
and say when the deathdew lies cold on my brow:
If ever I loved thee, my Jesus, 'tis now.


4 In mansions of glory and endless delight,
I'll ever adore thee in heaven so bright;
I'll sing with the glittering crown on my brow:
If ever I loved thee, my Jesus, 'tis now.

William Ralph Featherston(e) Canada 1846-1873. Born at Montreal, Quebec, Canada, he joined the Wesleyan Methodist Church there. He became a Christian at age 16 while in Toronto, and is thought to have written his famous hymn about the same time. He sent the poem to his aunt, Ms. E. Featherston Wilson and she gave it to a publisher. Adoniram. J Gordon, an evangelist, founder of Gordon College & Gordon-Conwell Theological Seminary, found the hymn in a 1870 London hymnal and was impressed with the words, but did not like the tune, so he composed the melody that has been used with the hymn ever since. Featherstone is thought to have married Julie R MacAlister in 1869 and that they had a son, John, in 1870. Featherstone died in Montreal a… Go to person page >
^ top

Those that say youth is wasted on the young might be surprised to hear that William Ralph Featherston (1846-1873) is believed to have written "My Jesus I Love Thee" at the age of 16!

Featherston, a Weslyan Methodist from Montreal, wrote the text at the time of his conversion and sent it to his aunt in Los Angeles. Somehow, the poem made its way to England where it was published anonymously in The London Hymn Book two years later. Adoniram Judson Gordon (1836-1895), who was compiling a Baptist hymn book, liked Featherston's text, but decided it needed a better tune than the one that was used in The London Hymn Book, so he wrote a new tune for it which he published in The Service of Song for Baptist Churches. This is the tune that is still used today.

It's astounding the variety of people, lands, and circumstances that came together in the creation of this song. Certainly God wanted it to be used in our worship of Him. --Greg Scheer, 1994

In 1870 Featherstone's text came to the attention of Adoniram J. Gordon (b. New Hampton, NH, 1836; d. Boston, MA, 1895), an evangelical preacher who was compiling a new Baptist hymnal. Because he was unhappy with the existing melody for this text, Gordon composed this tune; as he wrote, "in a moment…

All tunes published with 'My Jesus, I Love Thee'^ top

Born and raised in Montreal, Quebec, William Featherston most likely wrote this hymn at the age of sixteen on the occasion of his conversion and/or baptism. It was published anonymously in the London Hymn Book to a now forgotten tune. Adoniram Judson Gordon found it, wrote a new tune for it, and also published it anonymously in The Service of Song for Baptist Churches. It wasn’t until around 1930, fifty years after its publication, that enough research had been done to establish Featherston as the author, who had died at the young age of 28. Today, it is a much loved hymn of assurance and confession of faith, with words of comfort and peace. And perhaps bolstering the power of the text is Featherstone’s story itself. A young man with no connections, who simply wrote a poem one night about his own faith, has, unbeknownst to him, come to bless millions. God certainly works in mysterious ways to use the gifts and talents of his people.

The text remains almost entirely unchanged from Featherston’s original poem of four verses. A few hymnals, such as The United Methodist Hymnal and Worship and Rejoice don’t include the third verse: “I’ll love Thee in life, I will love Thee in death, and praise Thee as long as Thou lendest me breath; and say when the death-dew lies cold on my brow, if ever I loved Thee, my Jesus, ‘tis now.” The Baptist Hymnal 2008 changes the third line of the fourth verse to “And singing Thy praises before Thee I’ll bow,” rather than “I’ll sing with the glittering crown on my brow.”

The tune GORDON was composed by Adoniram Judson Gordon and first published in 1876. Gordon claimed that, “in a moment of inspiration, a beautiful new air sang itself” to him (Psalter Hymnal Handbook). The tune does not need much in the way of accompaniment – perhaps light piano, or even just a violin adding a harmony line. The vocal harmonies for this tune are easy to find and add a richness to both tune and text. Examples of building with harmonies throughout the song can be found in both Selah’s version of the hymn, and the Jimmy Swaggart trio’s version, which also includes a great key change into the last verse.

Because of the simple melody, this is a hymn that can be easily paired with another song to be sung right afterwards. Consider singing “How Deep the Father’s Love for Us,” and ending with just the first verse of “My Jesus I Love Thee” a cappella: singing without accompaniment solves the issue of finding the same key for both songs.

This response to God’s love can be sung at any time, but I recommend two specific spots in the service: after the Assurance of Forgiveness, and during the Lord’s Supper. The first verse especially reflects our own brokenness: “for thee all the follies of sin I resign.” We go on to reflect on what Christ has done for us in that, to paraphrase 1 John 4:10, He loved us and died for us as an atonement for our sins. What is there left to do in such a moment of reflection but to offer our hymn of praise and adoration? The second verse, in its remembrance of the Passion, makes this an especially beautiful selection for the Easter Season.

This hymn also makes for a powerful declaration of trust at funerals. The third verse particularly speaks of our ongoing hope in Christ, and could also be a celebration of the love for Christ seen in the life of a loved one remembered. 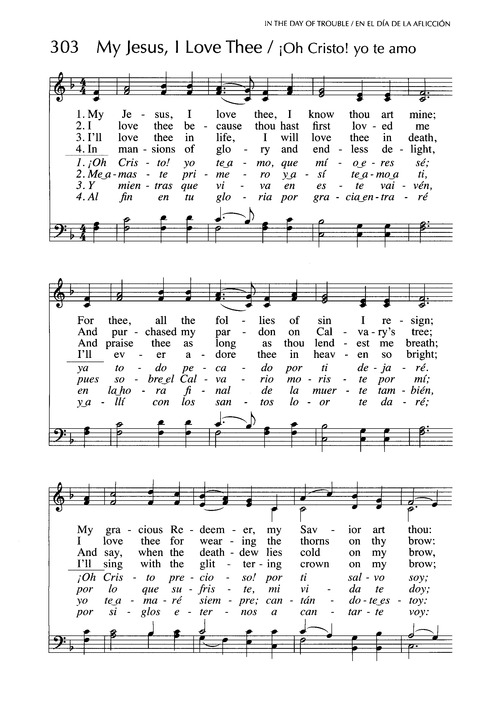 Hymns for a Pilgrim People #65

Hymns of the Christian Life #187

Lift Every Voice and Sing II #89

Sacred Selections for the Church #28

The Hymnal for Worship and Celebration #364

The Song Book of the Salvation Army #357