On a hill far away stood an old rugged cross

1 On a hill far away stood an old rugged cross,
the emblem of suffering and shame;
and I love that old cross where the dearest and best
for a world of lost sinners was slain.


2 O that old rugged cross, so despised by the world,
has a wondrous attraction for me;
for the dear Lamb of God left his glory above
to bear it to dark Calvary. [Refrain]


3 In that old rugged cross, stained with blood so divine,
a wondrous beauty I see,
for 'twas on that old cross Jesus suffered and died,
to pardon and sanctify me. [Refrain]


4 To that old rugged cross I will ever be true,
its shame and reproach gladly bear;
then he'll call me some day to my home far away,
where his glory forever I'll share. [Refrain] 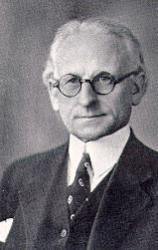 George Bennard (1873-1958) was born in Youngstown, OH. When he was a child the family moved to Albia, Iowa. He served with the Salvation Army in Iowa for several years before he was ordained in the Methodist Episcopal Church. His hymn "Speak, my Lord" appears in Triumphant Service Songs (Chicago: Rodeheaver Hall-Mack Co., 1934). He wrote words and tune for his best known hymn "The Old Rugged Cross" in 1913. Mary Louise VanDyke Go to person page >
^ top

All tunes published with 'The Old Rugged Cross'^ top

The cross and its meaning for believers are the themes of this hymn. The cross is seen as “the emblem of suffering and shame” in the first stanza, yet it has “a wondrous attraction” in the second and “a wondrous beauty” in the third. Why is such symbol of shame found so attractive? Because it is there that “Jesus suffered and died to pardon and sanctify me.” The joy that is found in contemplating the cross is not found in the shame, but in the promise that someday the saints will exchange the labor of sanctification for the crown of life (James 1:12, Rev. 2:10).

This hymn was begun in 1912 by George Bennard as he was holding evangelistic meetings in Michigan. He was contemplating the meaning of the cross, and was inspired to begin the song while meditating on John 3:16. He was unable to finish it, however, until early in 1913, while holding another series of evangelistic services. The song soon achieved wide popularity when it was introduced by evangelist Homer Rodeheaver.

This text was not accepted by most major hymnals until the 1950s, despite great popularity. One reason was the prohibitive fee charged by the copyright owner. Another was the somewhat controversial nature of a hymn expressing such great affection for the cross itself, rather than for Christ, the one who died there.

George Bennard wrote the tune OLD RUGGED CROSS with the text in 1912-1913. Charles H. Gabriel helped him complete the manuscript. It is a gospel hymn tune with a refrain, during which the lower voices echo the melody. There is some disagreement in different congregations about the exact rhythm of the opening line, because the natural rhythm of the words and the written rhythm of the music do not exactly align.

Because of the hymn’s focus on the cross, and its meaning for the believer, this hymn is most suited to Lent and Easter, though it may be sung at any time of year. Try combining this hymn with other hymns on the theme of the cross, presenting different aspects of its meaning, such as “The Old Rugged Cross” in medley with “At the Cross,” “When I Survey the Wondrous Cross,” set here for handbells. An accompaniment with a darker mood can help to emphasize the reality of “the emblem of suffering and shame,” as does Joel Raney’s choral setting of “The Old Rugged Cross,” based on George Bennard’s tune. The mood of the orchestral accompaniment is dark at first, evoking the suffering that the cross entails, but ends on a more joyful note, echoing the line “where His glory forever I’ll share.” 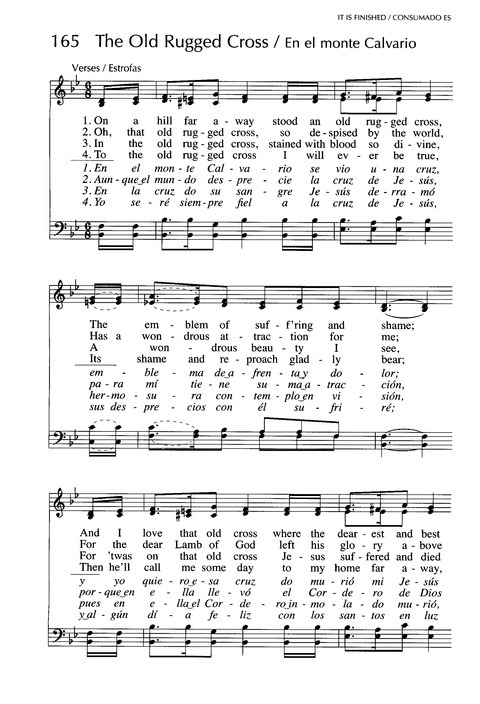 Hymns for a Pilgrim People #328

Hymns of the Christian Life #192

Lift Every Voice and Sing II #38

Sacred Selections for the Church #322

The Hymnal for Worship and Celebration #186

The Song Book of the Salvation Army #124