Rejoice, the Lord is King!

Rejoice, the Lord is King: Your Lord and King adore

1 Rejoice, the Lord is King:
Your Lord and King adore!
Rejoice, give thanks and sing,
And triumph evermore.
Lift up your heart,
Lift up your voice!
Rejoice, again I say, rejoice!


2 Jesus, the Savior, reigns,
The God of truth and love;
When He has purged our stains,
He took his seat above;
Lift up your heart,
Lift up your voice!
Rejoice, again I say, rejoice!


3 His kingdom cannot fail,
He rules o'er earth and heav'n;
The keys of death and hell
Are to our Jesus giv'n:
Lift up your heart,
Lift up your voice!
Rejoice, again I say, rejoice!


4 Rejoice in glorious hope!
Our Lord and judge shall come
And take His servants up
To their eternal home:
Lift up your heart,
Lift up your voice!
Rejoice, again I say, rejoice!

Charles Wesley (PHH 267) wrote this text for Easter and Ascension in six stanzas. First published in John Wesley's Moral and Sacred Poems (1744), the text was also published in Charles Wesley's Hymns for our Lord's Resurrection (1746). The original stanzas 2 and 5 are not included.

The text rejoices in the kingship of Christ (st. 1) whose rule extends "o'er earth and heaven" (st. 2). All will bow the knee to Christ (st. 3) when he returns in glory to judge "the living and dead" (st. 4). The refrain line based on Philippians 4:4, “Rejoice in the Lord always. I will say it again: Rejoice,” is the keynote of the entire text.

Liturgical Use:
Ascension; Easter; a great hymn of praise suitable for any worship service (fits well with the royal psalms in the Old Testament); funeral or memorial service.

Rejoice, the Lord is King. C. Wesley. [Easter or Ascension.] This is No. viii. of 16 hymns printed in 1746 as Hymns for Our Lord's Resurrection. It is in 6 st.anzas of 6 lines. It had previously appeared in J. Wesley's Moral and Sacred Poems, 1744. (P. Works, iv. p. 140.) It has been included, either in full or in part, in most hymnbooks of any moment from Whitefield’s, in 1753, to Thring's, in 1882, with the result that it is in extensive use in all English-speaking countries. Curiously enough, however, it was not given in the Wesleyan Hymn Book until the revised ed. of 1875.

A cento for harvest beginning with the first stanza is found in some Unitarian hymnbooks both old and new, including Ellen Courtauld's Psalms, Hymns and Anthems, 1860. It is in 5 st., the first stanza and lines5,6, of each of the others being from this hymn, whilst the rest are by John Taylor in Enfield's Norwich Selection of Hymns, 1795. In R. Bingham's Hymno. Christ. Latina, 1871, st. i., ii., iv., vi., slightly altered, are rendered into Latin as, "Rex est Dominus! Laetantes."

All tunes published with 'Rejoice, the Lord is King!'^ top

This hymn opens with a jubilant call to rejoice in the reign of our Lord. The middle stanzas are rich in biblical allusions to the triumphant reign of Christ. We are assured that Jesus has removed the guilt of our sin and is now reigning at God's right hand, in complete control over death and hell (Hebrews 1:3, Revelation 1:18). The final stanza reminds us to look forward in hope of Christ's Second Coming (1 Peter 1:21) In view of this joyful future, the refrain reminds us to “Rejoice, again I say rejoice” (see Philippians 4:4).

Charles Wesley wrote this hymn, and it was first published in 1744 in his brother John’s Collection of Moral and Sacred Poems. Charles later published it in his own anonymous Hymns for our Lord’s Resurrection in 1746. The theme of the text is celebration of Christ as King and Lord of all the earth.

Wesley originally wrote six stanzas, but hymnals vary on which of these are included today. The original first and third (“His kingdom cannot fail”) stanzas are always included in modern hymnals, while the fourth (“He sits at God’s right hand”) appears only occasionally, and the fifth (“He all His foes shall quell”) is almost always omitted. The other two stanzas (the second, “Jesus the Savior reigns,” and sixth, “Rejoice in glorious hope”) are usually included. Each stanza concludes with a refrain, which is identical for stanzas one through five. Stanza six originally had a unique refrain, but more often today, it is given the same refrain as the other stanzas. This may be due to how the refrain fits the common tune, DARWALL.

The most common tune used with this text is DARWALL, named after the composer, John Darwall. It was first published with the text of Psalm 148 in Aaron William’s New Universal Psalmodist in 1770, hence the alternate title DARWALL'S 148TH. This tune may be sung in unison or in parts at a lively tempo. The use of trumpets would add to the theme of regal celebration that is present in the text.

Another tune that is used sometimes is GOPSAL, written especially for this text by G. F. Handel around 1750. His setting was lost for many years, but was rediscovered and published in 1826 by Samuel Wesley, son of Charles Wesley. The tune was named after a place in Leicestershire.

This hymn is suitable for occasions where Christ's royal majesty is celebrated, such as Easter, Ascension, and Christ the King Sunday. It could also be used for an opening hymn or call to worship. One possibility for a hymn medley is “Rejoice, Ye Pure in Heart,” as in the handbell arrangement “Rejoice! Give Thanks and Sing.” Typically, this hymn is given majestic settings, which suit its royal theme. A concertato setting of “Rejoice, the Lord is King!” opens with a brass fanfare, and uses brass, organ, and optional timpani to accompany the choir and congregation. Other settings provide some contrast and suggest a different consideration of the message. Stan Pethel's original music for the text of “Rejoice, the Lord is King” has a playful feel, in contrast to the broad, majestic settings this text usually receives. A little Baroque flavor to the music is a nod to the time when this hymn was written (and perhaps to Handel as well). An arrangement for choir and piano of “Come, People of the Risen King” blends this contemporary song with Wesley's hymn, with optional brass and rhythm, in a style suitable for blended worship services.

The Book of Common Praise: being the hymn book of The Church of England in Canada (revised 1938) #392c

Urania: or a choice collection of psalm-tunes, anthems, and hymns, from the most approv'd authors, with some entirely new; in two, three, and four parts... #186 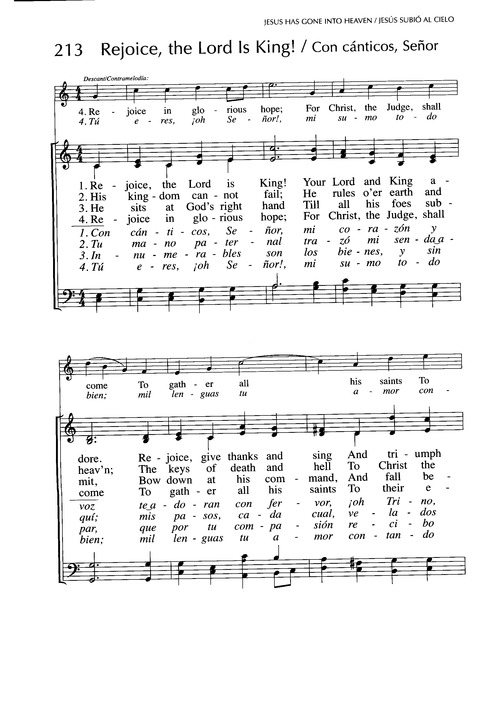 A New Hymnal for Colleges and Schools #44

Hymns for a Pilgrim People #393

Hymns of the Christian Life #107

The Hymnal for Worship and Celebration #228

The Irish Presbyterian Hymbook #454a

The Irish Presbyterian Hymbook #454b

The Song Book of the Salvation Army #164

Display Title: Lift up your heart, lift up your voice First Line: Rejoice, the Lord is King! Date: 1986 Subject: The Lord Jesus Christ | Kingdom
The Song Book of the Salvation Army #164