Jesus Shall Reign Where'er the Sun

Jesus shall reign where'er the sun

1 Jesus shall reign where'er the sun
does its successive journeys run,
his kingdom stretch from shore to shore,
till moons shall wax and wane no more.


2 To him shall endless prayer be made,
and praises throng to crown his head.
His name like sweet perfume shall rise
with every morning sacrifice.


3 People and realms of every tongue
dwell on his love with sweetest song,
and infant voices shall proclaim
their early blessings on his name.


4 Blessings abound where'er he reigns:
the prisoners leap to lose their chains,
the weary find eternal rest,
and all who suffer want are blest.


5 Let every creature rise and bring
the highest honors to our King,
angels descend with songs again,
and earth repeat the loud amen.

Isaac Watts (PHH 155) based this hymn text on Psalm 72:12-19 and referred to verses 5 and 8 of the psalm as well. (For general comments on this psalm see PHH 72.) Originally in eight stanzas entitled "Christ's Kingdom among the Gentiles," the text was published in Watts' Psalms of David, Imitated (1719). The original stanzas 2, 3, and 7 are omitted, as is customary in modern hymnals.

Watts' text is a strong Christological interpretation of Psalm 72. We sing of the worldwide reign of Christ (st. 1), who is praised by all creatures (st. 2 and 5) , and whose rule results in blessings on people "of every tongue" (st. 3) and redemption for the outcasts (st. 4). The text has a strong missionary focus.

Jesus shall reign where'er the sun. I. Watts. [Foreign Missions.] This is one of the most popular hymns by Watts, and was given in his Psalms of David, 1719, as Pt. ii. of his version of Ps. lxxii., in 8 stanzas of 4 lines. Although it has attained to a high position in modern Hymns, it is rarely found in the collections published before the present cent. It increased in popularity with the growth and development of Foreign Missions, and is now used most extensively in all English-speaking countries. One of the earliest to adopt it for congregational use was Rowland Hill. It is found in his Psalms & Hymns, 1st edition, 1783; but abbreviated to 6 stanzas.

This was followed by some compilers in the Church of England, including Cotterill in Psalms & Hymns, 1810-1820; Bickersteth, 1833, and others; by the Wesleyans in their Supplement, 1830; the Baptists, and other denominations, until at the present day it is given in almost every English hymn-book of any standing or merit. As an example of the way in which The Psalms of David were imitated in the language of the New Testament, by Watts, it is unusually good. It is also in his best style. In modern collections it is generally given in an abbreviated form, ranging from 4 stanzas, as in Hymns Ancient & Modern to 6 stanzas, as in the Wesleyan Hymn Book. Changes are also introduced in the text, but most of these date from the beginning of the present century. It has been rendered in full and in part in many languages, including "Omnibus in terris Dominus rognabit Iesus," by the Rev. R. Bingham, in his Hymnologia Christiana Latina, 1871, p. 103. In this rendering stanzas ii., iii., and vii. are omitted. Mr. G. J. Stevenson gives, in his Methodist Hymn Book Notes, 1883, p. 351, an account of the striking and historical use which was made of this hymn when various islands in the South Seas officially renounced heathenism and embraced Christianity:—

"Perhaps one of the most interesting occasions on which this hymn was used was that on which King George, the sable, of the South Sea Islands, but of blessed memory, gave a new constitution to his people, exchanging a Heathen for a Christian form of government. Under the spreading branches of the banyan trees sat some thousand natives from Tonga, Fiji, and Samoa, on Whitsunday, 1862, assembled for divine worship. Foremost amongst them all sat King George himself. Around him were seated old chiefs and warriors who had shared with him the dangers and fortunes of many a battle; men whose eyes were dim, and whose powerful frames were bowed down with the weight of years. But old and young alike rejoiced together in the joys of that day, their faces most of them radiant with Christian joy, love, and hope. It would be impossible to describe the deep feeling manifested when the solemn service began, by the entire audience singing Dr. Watts's hymn, “Jesus shall reign where'er the sun"... Who so much as they could realize the full meaning of the poet's words? for they had been rescued from the darkness of heathenism and cannibalism, and they were that day met for the first time under a Christian constitution, under a Christian king, and with Christ Himself reigning in the hearts of most of those present. That was indeed Christ's kingdom set up in the earth."

All tunes published with 'Jesus Shall Reign Where'er the Sun'^ top

In 2007, author Sally Loyd-Jones released the Jesus Storybook Bible. This book for children (but loved by adults, too) tells forty-four Bible stories from the Old and New Testament in such a way that each story points to Jesus. It teaches all who read it that the story of Jesus is really the story of the entire Bible.

While Loyd-Jones’ book captured the hearts of millions, her message is not a new one. In 1719, Isaac Watts published a hymnal entitled The Psalms of David, Imitated. In this hymnal, he paraphrased many of the Psalms, but in a very different style than many of his predecessors. The order of the day was to keep any paraphrase as close to the text as possible. Watts decided to do otherwise, and his interpretations of the psalms are quite loose, in an effort to write something new while keeping the spirit of the Psalm. His versification of Psalm 72 is no different. He interprets the psalm using a Christological lens. The king referenced in the psalm is Christ, and could be no one else. Watts, like Loyd-Jones, understood that the Old Testament makes sense in light of the New, and vice versa. There are many different stories in the Bible, but they are all part of the one great Story.

Isaac Watts wrote this text for his 1719 publication, Psalms of David, Imitated. It originally had eight stanzas and was titled, “Christ’s Kingdom among the Gentiles.” The original second, third, and seventh stanzas are omitted from most modern hymnals. These verses have references to Europe, Persia, India, and “barbarous nations,” and are perhaps the reason Albert Bailey could write this about Watt’s text: Watts made “David speak like King William III; England and Scotland take the place of Israel and Judah. Thus the Psalmist became ‘an orthodox and patriotic English Christian of the early eighteenth century’” (The Gospel in Hymns, 49). It is laudable that Watts contemporized a psalm to fit the times, but his text goes much further than a nationalistic twist on a familiar text. With those three stanzas dropped, this text is much more a global hymn proclaiming Christ’s dominion over the whole world.

The tune DUKE STREET is credited to John Hatton. There is a generic resemblance between this tune and TRURO, an anonymous tune to which the text is set in the Lutheran Hymnal Handbook. DUKE STREET has a long meter, which, according to Austin Lovelace, “lends itself readily to majestic subjects and stately treatment” (The Anatomy of Hymnody, 25). With Watts’ text, this is indeed a very majestic hymn, and should be sung in such a manner. Accompany with organ, trumpets, stately piano, or any other strong accompaniment.

This proclamation of Christ’s reign and assurance of our hope in the Kingdom can be sung at many times during the Liturgical year. It would be very comforting during the season of Advent, when we profess our longing for, and hope of, Christ’s eternal reign, and as a hymn of assurance on New Year’s Day. It can also be sung as a hymn of celebration during Epiphany or Ascension, or on Christ the King Sunday. It’s a beautiful opening hymn or processional. You could also sing the first three or four verses (depending on which hymnal you use), and sing the last verse as a doxology at the end of the service.

Harmonia Americana: containing a concise introduction to the grounds of music; with a variety of airs, suitable fore divine worship and the use of musical societies; consisting of three and four parts #33b 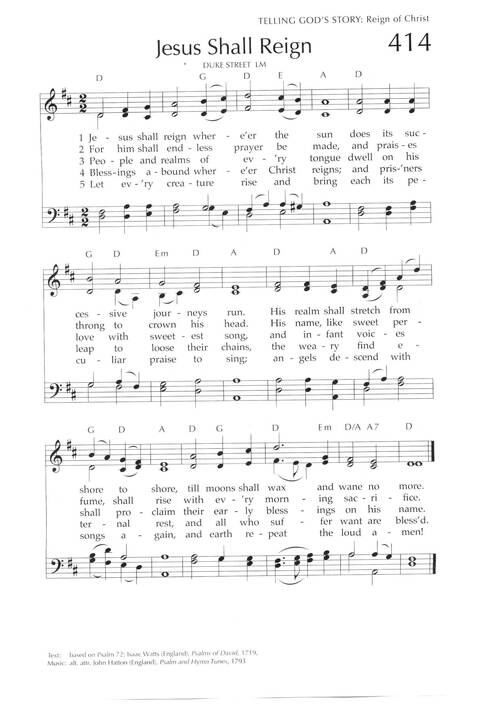 A New Hymnal for Colleges and Schools #16

A Selection of Plain Tunes, Set Pieces, and Anthems from Indian Melodies #31b

Ancient and Modern #691a

Ancient and Modern #691b

Great Songs of the Church (Revised) #261

Hymns for a Pilgrim People #211

Hymns of the Christian Life #439

Psalms for All Seasons #72B

Spurgeon's Own Hymn Book #72a

The Book of Hymns (A fresh anthology of favourite hymns) #47

The Hymnal for Worship and Celebration #231

The Irish Presbyterian Hymbook #637a

The Irish Presbyterian Hymbook #637b

The New English Hymnal #388a

The New English Hymnal #388b

The Song Book of the Salvation Army #160

Include 1631 pre-1979 instances
All instances^ top
Suggestions or corrections? Contact us