Lo! He Comes with Clouds Descending

Lo! He comes with clouds descending, Once for guilty sinners slain

1 Lo! he comes with clouds descending,
once for favored sinners slain;
thousand, thousand saints attending
swell the triumph of his train.
Alleluia! Alleluia!
God appears on earth to reign.


2 Ev'ry eye shall now behold him,
robed in dreadful majesty;
those who set at naught and sold him,
pierced, and nailed him to the tree,
deeply wailing, deeply wailing,
shall the true Messiah see.


4 Now Redemption, long expected,
see in solemn pomp appear!
All his saints, by man rejected,
now shall meet him in the air.
Alleluia! Alleluia!
See the day of God appear!

In 1750 John Cennick, a friend of John and Charles Wesley (PHH 267), wrote an Advent hymn that began, "Lo! he cometh, countless trumpets blow before his bloody sign!" Cennick's hymn was published in his Collection (1752). Charles Wesley completely rewrote the text and published his version in Hymns of Intercession for all Mankind (1758) with the title "Thy Kingdom Come" (changed to "The Second Advent" in other editions). Though later hymnals occasionally mixed Cennick's lines with Wesley's, the Psalter Hymnal includes most of Wesley's original text.

Like so many of Wesley's texts, "Lo! He Comes" abounds with biblical imagery. Stanzas 1, 2, and 4 are based on the rich language of John's apocalyptic visions recorded in Revelation 1:7 and 5:11-13. The third stanza reminds us that Christ's wounds and atoning death should lead us to greater faith and ultimately to our worship of Christ in glory (as Christ himself reminded the doubting Thomas). Stanza 4 is a majestic doxology to Christ, our Savior and Lord.

Liturgical Use:
Advent; other worship services that focus on Christ's coming again in glory.

Lo! He comes with clouds descending, Once for favoured sinners slain. [The Second Advent.] The hymn in modern collections which opens with these lines is a cento of a somewhat complicated character, und will need, for clearness and accuracy, the reproduction of the original text of several hymns.
1. The first form of the hymn is by John Cennick. There is evidence to show that it was sung by the congregation of the Moravian Chapel, in Dublin, on April 20, 1750; but the earliest printed text known appeared in the fifth (1752) edition of Cennick's Collection of Sacred Hymns, &c, Dublin, S[amuel] rowell, and is as follows:—

[2] "Now His merits by the harpers,
Thro' the eternal deeps resounds!
Now resplendent shine His nailprints,
Every eye shall see His wounds!
They who pierced Him, Shall at His appearing wail.

[3] "Every island, sea, and mountain,
Heaven and earth shall flee away!
All who hate Him must, ashamed,
Hear the trump proclaim His day:
Come to judgment!
Stand before the Son of Man!

[4] "All who love Him view His glory,
Shining in His bruised Face:
His dear Person on the rainbow,
Now His people's heads shall raise:
Happy mourners!
Now on clouds He comes! He comes!

[5] “Now redemption, long expected,
See, in solemn pomp appear:
All His people, once despised,
Now shall meet Him in the air:
Allelujah!
Now the promised kingdom's come!

[6] "View Him smiling, now determined
Every evil to destroy!
All the nations now shall sing Him
Songs of everlastingjoy!
O come quickly!
Allelujah ! come Lord, come!"

2. The next form is by Charles Wesley. In 1758 was published the Hymns of Intercession for All Mankind, a tract of 40 hymns. (Poetical Works1868-72, vol. vi. 148.) Of these there were three in the same metre, viz.:—
xxxviii. “Rise, ye dearly purchased sinners."
xxxix. "Lo! He comes with clouds descending.”
xl. "Lift your heads, ye friends of Jesus."
The original text of the second of these hymns is as follows:—

"1. Lo! He comes with clouds descending,
Once for favour'd sinners slain!
Thousand, thousand saints attending,
Swell the triumph of his train:
Hallelujah,
God appears, on earth to reign !
"2. Every eye shall now behold Him
Rob'd in dreadful majesty,
Those who set at nought and sold Him,
Pierc'd, and nail'd Him to the tree,
Deeply wailing Shall the true Messiah see.
"3. The dear tokens of his passion
Still His dazling body bears,
Cause of endless exultation
To his ransom'd worshippers;
With what rapture
Gaze we on those glorious scars!
"4. Yea, amen! let all adore Thee
High on thine eternal throne!
Saviour, take the power and glory,
Claim the kingdom for thine own:
Jah, Jehovah,
Everlasting God, come down."

3. The third form of the text is really the first form of the modern cento. It was given by M. Madan in his Collection of Psalms & Hymns, &c., 1760, No. 42.
4. This cento, with the omission of stanza v. came into general use, and was rarely altered until after 1830, when Hall, in his Mitre Hymn Book, 1836, and others, began to tamper with the text. Several editors were assisted in making their alterations and changes in the text through T. Olivers's hymn, "Come, Immortal King of Glory" (q.v.), first published in 20 stanzas without date; and then in 36 stanzas in 1763. The fourth stanza of the 1763 text reads :—

“Lo! He comes with clouds descending;
Hark! the trump of God is blown;
And th' archangel's voice attending,
Make the high procession known,
Sons of Adam
Rise and stand before your God."

A cento from this hymn, and beginning with this stanza, is given in Lord Selborne's Book of Praise, 1862. Either from the original, or from Lord Selborne's cento, several lines by Olivers are interwoven in some modern collections with Madan's cento of 1760, as in Thring's Collection, 1882, where in stanza iv. lines 5, 6 are from Olivers's stanza xxxv.
5. The alterations which are found in the Madan cento in modern hymnbooks are very numerous, and range from a single word to several lines. Of these altered versions more than twenty exist in the hymn-books now in common use in English-speaking countries. These alterations have not been made to suit any special school of thought, and in most cases they weaken, instead of strengthen the hymn. They can easily be detected by comparing any text with those given above.
6. Amongst the imitations of this hymn that are in common use we have "Lo! He comes with clouds descending," with stanza ii. beginning “See the universe in motion." This imitation embodies a great many lines from Wesley's text. It is by M. Bridges, and was published in his Hymns of the Heart, 1848, in 9 stanzas. In 1855 it was given in H. W. Beecher's Plymouth Collection, with the omission of stanza iv., and attributed to Brydges in error. A second imitation is: “Lo! He comes with pomp victorious." This is given anonymously in the 1876 edition of E. Harland's Church Psalter and Hymnal.
7. The Cennick-Wesley cento (Madan’s) is one of the most popular hymns in the English language, and is in extensive use in all English-speaking countries. It has also been translated into many languages. The translation into Latin, "Nube vectus en descendit," by the Rev. C. B. Pearson in his Latin Translation of English Hymns, 1862, p. 19, is from Wesley's text, with the addition of Cennick's stanza v.
8. The history of the tune "Olivers" in its original form, and also in its recast form as "Helmsley," both of which are inseparably associated with this hymn, is given by Major Crawford in Grove's Dictionary of Music, vol. ii. p. 161. It appears from this article that Thomas Olivers (who is named above, and is the author of the popular hymn "The God of Abraham praise") constructed a tune partly out of a concert-room song, beginning "Guardian angels, now protect me," and the same was published in Wesley's Select Hymns and Tunes Annexed, 1765, under the title Olivers. In 1769 it was recast by M. Madan, and published under the name of Helmsley, in his Collection of Hymn and Psalm Tunes. Four years afterwards a burlesque called The Golden Pippin (1769) was produced in London, and failed. In 1776 it was revived in a shortened form, and one of the actresses, Miss Catley, introduced into it the melody of "Guardian angels" adapted to the words of the burlesque. Although there is no indication of this in the book of words, she no doubt concluded the song, on which Olivers had based his tune eleven years before, by dancing "Miss Catley's Hornpipe," constructed for the purpose out of the then popular Helmsley. It seems, therefore, that instead of the hymn tune being liable to the obloquy, so continually cast upon it, of being made out of "Miss Catley's Hornpipe," the hornpipe was made out of the tune.

John Wesley attributed the tune HELMSLEY to Thomas Olivers in Wesley's 1765 Sacred Melodies with his brother's text of "Lo! He Comes with Clouds Descending." However, Olivers is said to have heard the tune on the street somewhere. Since the first line resembles a tune by violinist and composer Thoma…

This tune is likely the work of the composer named here, but has also been attributed to others as shown in the instances list above.

All tunes published with 'Lo! He Comes with Clouds Descending'^ top 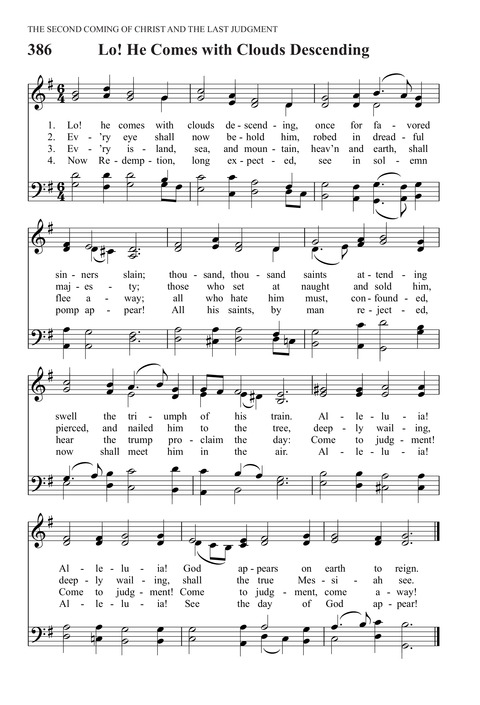 The Book of Common Praise of the Reformed Episcopal Church #4

The Book of Common Praise of the Reformed Episcopal Church #5

The Hymnal for Worship and Celebration #241

The Song Book of the Salvation Army #161

Welsh and English Hymns and Anthems #32b