Sing Praise to God Who Reigns Above

Sing praise to God who reigns above

1 Sing praise to God who reigns above,
the God of all creation,
the God of power, the God of love,
the God of our salvation.
With healing balm my soul is filled
and every faithless murmur stilled:
To God all praise and glory.


2 The Lord is never far away,
but through all grief distressing,
an ever present help and stay,
our peace and joy and blessing.
As with a mother's tender hand,
God gently leads the chosen band:
To God all praise and glory.


3 Thus all my toilsome way along,
I sing aloud thy praises,
that earth may hear the grateful song
my voice unwearied raises.
Be joyful in the Lord, my heart,
both soul and body bear your part:
To God all praise and glory.

Schütz, Johann Jakob, was born Sept. 7, 1640, at Frankfurt am Main. After studying at Tübingen (where he became a licentiate in civil and canon law), he began to practise as an advocate in Frankfurt, and in later years with the title of Rath. He seems to have been a man of considerable legal learning as well as of deep piety. He was an intimate friend of P. J. Spener; and it was, in great measure, at his suggestion, that Spener began his famous Collegia Pietatis. After Spener left Frankfurt, in 1686, Schütz came under the influence of J. W. Petersen; and carrying out Petersen's prin¬ciples to their logical conclusion, he became a Separatist, and ceased to attend the Lutheran services or to communicate. He died at Frankfurt, May 22, 1690… Go to person page >
^ top

MIT FREUDEN ZART has some similarities to the French chanson "Une pastourelle gentille" (published by Pierre Attaingnant in 1529) and to GENEVAN 138 (138). The tune was published in the Bohemian Brethren hymnal Kirchengesänge (1566) with Vetter's text "Mit Freuden zart su dieser Fahrt." Splendid mu…

Deuteronomy 32:3 was the basis for this hymn of praise – “For I will proclaim the name of the Lord; ascribe greatness to our God!” (ESV) Using a variety of metaphors for God and for His works, this text overflows with proclamations of God's loving care for His people.

Johann Jakob Schütz wrote this hymn of praise in German with nine stanzas. In 1675 he published it in his Christliches Gedenkbüchlein. The most common English translation in use is by Frances E. Cox from 1864, which was published in Orby Shipley's Lyra Eucharistica and her own Hymns from the German. Catherine Winkworth has also made a translation.

This hymn is typically published with four stanzas. Stanza 1 always opens the hymn, and the original stanzas 2 and 6 are never used. Different hymnals include various selections from the remaining stanzas. There is some variation in wording, due to multiple translations and many alterations by hymnal editors. One textual difference affects the meaning of the opening line of stanza 7, “Thus all my gladsome way along.” A few hymnals have “toilsome” in place of “gladsome.” The German original does not contain either adjective; it simply says “all my life long.” Most hymnals have “gladsome,” which implies a life perspective that the joy of the Lord becomes deeply ingrained in one's soul. If “toilsome” is used, it implies that, even though life is often hard, God is good, and can help the Christian endure. Each stanza ends with a brief refrain.

The most common tune used with this text is MIT FREUDEN ZART, which is an anonymous German tune named after an Easter hymn by Georg Vetter. It first appeared in a Bohemian Brethren hymnal in 1566, hence the alternate title BOHEMIAN BRETHREN. Sing this tune boldly with bright accompaniment. Experiment with both unison and harmonized singing.

Another tune that is used occasionally is LOBT GOTT DEN HERREN, IHR by Melchior Vulpius. It was published in 1609 with the text for which it was written and named, an Epiphany hymn by Joachim Sartorius. It has been paired with Schütz's text only in the last century.

This hymn extols the greatness of God in giving all good things to His people, and calls on us to continue to give God the praise He richly deserves. It could be paired with another hymn such as in “Doxology of Praise” , which presents “Praise God, from Whom All Blessings Flow” as an introduction and conclusion to “Sing Praise to God Who Reigns Above;” the piano accompaniment can be augmented with the optional brass and percussion. The bright tones of handbells, trumpet, and handchimes demonstrate the joyous mood of “Sing Praise to God Who Reigns Above.” LOBT GOTT DEN HERREN, IHR might not be the best choice for congregational singing because it is not a familiar tune, but it is a good choice for a choral setting of “Sing Praise to God Who Reigns Above” – with an optional flute part. 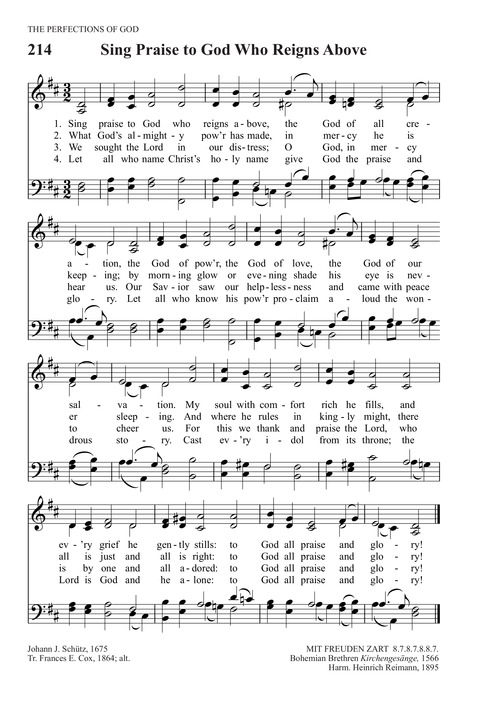 A New Hymnal for Colleges and Schools #43

Ancient and Modern #778a

Ancient and Modern #778b

Hymns for a Pilgrim People #14

Hymns to the Living God #20

Praise! Our Songs and Hymns #2

The Covenant Hymnal #783b

The Hymnal for Worship and Celebration #6