To God be the glory, great things he hath done

1 To God be the glory, great things he hath done:
so loved he the world that he gave us his son,
who yielded his life an atonement for sin,
and opened the lifegate that all may go in.


2 Oh, perfect redemption, the purchase of blood,
to ev’ry believer the promise of God.
The vilest offender who truly believes,
that moment from Jesus a pardon receives. [Refrain]

Prodigious writer of hymn texts, Fanny J. Crosby (b. Putnam County, NY, 1820; d. Bridgeport, CT, 1915) wrote this hymn, which was first published with Doane's tune in Songs of Devotion (1870). This text and "Blessed Assurance" (490) are among the best-known and most-loved hymn texts of the thousands Crosby produced. Initially ignored in the United States, the hymn was sung in British churches after its inclusion in Ira D. Sankey's Sacred Songs and Solos (1903). Because of its use in the Billy Graham Crusades beginning in 1954, the hymn gained great popularity in Britain and Australia as well as in the United States.

In contrast to many gospel hymns (including the majority of Crosby's texts), “To God Be the Glory” directs our attention away from personal experience to the glory of God. God so loved the world that he gave us his Son to make atonement for sin (st. 1); all who believe in Christ will receive pardon (st. 2) and will rejoice now and through all eternity because of the "great things he has done" (st. 3). The refrain borrows its praise in part from the Old Testament psalms. The phrase "when Jesus we see" (st. 3) must have meant something special to Crosby, who was blinded when she was seven weeks old.

Fanny (Francis) Jane Crosby attended the New York City School for the Blind, where she later became a teacher. She began writing poetry when she was eight and publishing several volumes, such as A Blind Girl, and Other Poems (1844). Married to musician Alexander Van Alstyne, who was also blind, Crosby began writing hymn texts when she was in her forties. She published at least eight thousand hymns (some under various pseudonyms; see PHH 427); at times she was under contract to her publisher to write three hymns a week and often wrote six or seven a day. Crosby's texts were set to music by prominent gospel song composers such as William B. Bradbury (PHH 114), William H. Doane, Robert S. Lowry (PHH 396), Ira D. Sankey (PHH 73), and William J. Kirkpatrick (PHH 188). Her hymns were distributed widely and popularized at evangelistic services in both America and Great Britain. Crosby was one of the most respected women of her era and the friend of many prominent persons, including presidents of the United States.

Liturgical Use:
Suitable for many worship services as a superb hymn of praise for God's mighty acts of redemption in Christ; baptism; profession of faith; assurance of pardon.

TO GOD BE THE GLORY (Doane)

All tunes published with 'To God Be the Glory'^ top

This text is unique from Crosby’s other hymns because, rather than focus on our experience of God, the words are wholly about God and His perfect glory. In a sense, the hymn perfectly displaces us, removing us from the pedestal on which we so often place ourselves. This displacement is one of the great paradoxes of the Christian faith. It feels very natural for us to seek attention, approval, and our own glory. We like to be in control and present our own image to the world, an image we seek to improve through any means possible. On the other hand, there is great comfort in knowing that the image we try to make for ourselves doesn’t matter. We are made in the image of God, which means that whatever we do has to bring Him and Him alone glory. Our lives are wrapped up in God, and so too are the mistakes we make, the wounds we inflict, and all of our shortcomings. These are the things we try to avoid while we maintain control of our lives. But what a joy and a comfort to know that though these things may happen, because God is ultimately in control, and because our own image does not matter, God is still glorified. While we should still try to live a holy and upright life, we should do so to bring God glory, not ourselves. What a beautiful freedom that is.

This text by Fanny Crosby was first published in William H. Doane’s collection, Songs of Devotion, in 1870. Most hymnals contain the original three verses and chorus, though the Presbyterian Hymnal doesn’t include the original second verse, and Rejoice in the Lord doesn’t include the refrain. Some hymnals add the chorus as an extension of each verse. The words and phrasing are slightly different in each hymnal. Be sure to note the last line of the third stanza, in which Crosby, blind from birth, writes, “But purer, and higher, and greater will be my wonder, my transport, when Jesus we see.”

The tune TO GOD BE THE GLORY was written by William Doane, first appearing in Doane’s Songs of Devotion in 1870. This tune is almost exclusively used with this hymn. Be sure to sing this tune at a lively and joyful tempo. Because the chorus feels like an extension of each verse, it isn’t necessary to change the dynamics between the two. However, it could be quite powerful to end with an a cappella chorus at the very end.

This hymn could be sung during any time of praise, such as the opening hymns, a response of gratitude to either the assurance or the sermon, or a closing hymn. There are a vast number of songs it could be paired with, such as “Glorious and Mighty,” “He is Exalted,” “Holy, Holy, Holy,” or “Praise to the Lord, the Almighty.” As an introduction to the song, and a connection between the words we speak and words we sing, you could read the Westminster Shorter Catechism Q & A 1: “What is the chief end of man? To glorify God, and to enjoy him forever.” 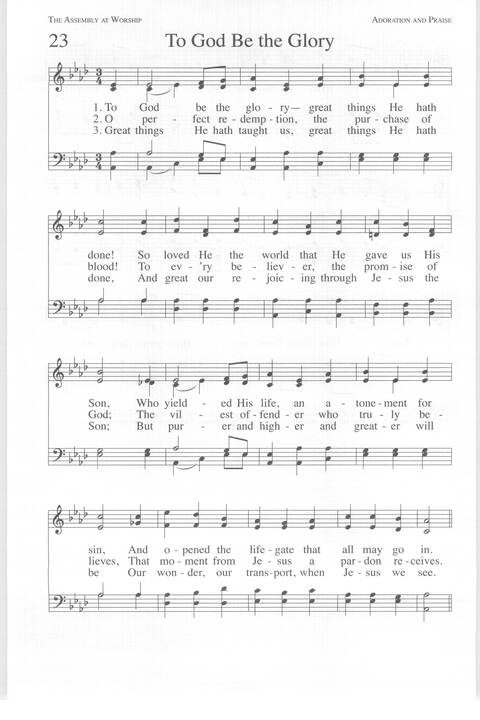 Hymns for a Pilgrim People #41

Hymns of the Christian Life #29

Praise! Our Songs and Hymns #8

Songs for Worship and Praise #1

The Book of Hymns (A fresh anthology of favourite hymns) #26

The Hymnal for Worship and Celebration #66

Display Title: To God Be the Glory First Line: To God be the glory great things He hath done! Tune Title: TO GOD BE THE GLORY Author: Fanny J. Crosby Meter: 11.11.11.11. with Refrain Date: 1986 Subject: God | Father; God Our Father : His Adoration and Praise | ; God Our Father : His Love and Mercy | ; Salvation |
The Hymnal for Worship and Celebration #66

The Song Book of the Salvation Army #22