All texts published with CHRIST LAG IN TODESBANDEN^ top

CHRIST LAG IN TODESBANDEN is an adaptation of a medieval chant used for "Victimae Paschali laudes" (the same chant is the source for CHRIST IST ERSTANDEN, 407). The tune's arrangement is credited to Johann Walther (b. Kahla, Thuringia, Germany, 1496: d. Torgau, Germany, 1570), in whose 1524 Geystliche Gesangk Buchleyn it was first published. But it is possible that Luther also had a hand in its arrangement.

Walther was one of the great early influences in Lutheran church music. At first he seemed destined to be primarily a court musician. A singer in the choir of the Elector of Saxony in the Torgau court in 1521, he became the court's music director in 1525. After the court orchestra was disbanded in 1530 and reconstituted by the town, Walther became cantor at the local school in 1534 and directed the music in several churches. He served the Elector of Saxony at the Dresden court from 1548 to 1554 and then retired in Torgau.

Walther met Martin Luther in 1525 and lived with him for three weeks to help in the preparation of Luther's German Mass. In 1524 Walther published the first edition of a collection of German hymns, Geystliche gesangk Buchleyn. This collection and several later hymnals compiled by Walther went through many later editions and made a permanent impact on Lutheran hymnody.

One of the earliest and best-known Lutheran chorales, CHRIST LAG IN TODESBANDEN is a magnificent tune in rounded bar form (AABA) with vigor and lightness characteristic of Easter carols. Many organ compositions are based on this tune; Johann S. Bach (PHH 7) incorporated it extensively in his cantatas 4 and 158.

Text: Christ In The Bands Of Death Was Laid 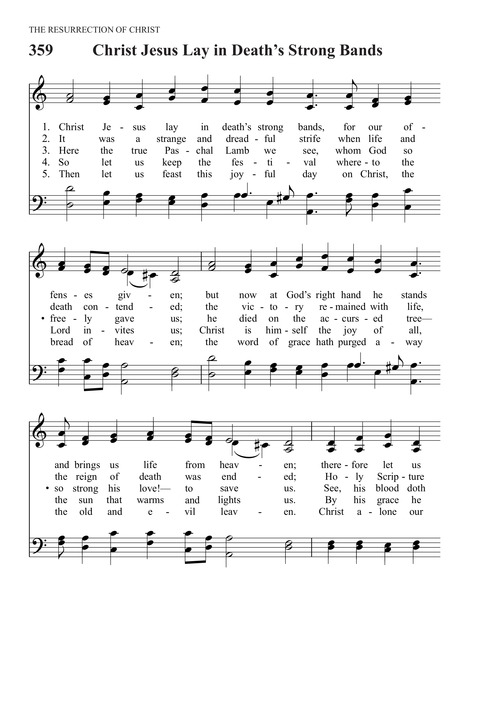