[There is a green hill far away] (Stebbins)

[There is a green hill far away] (Stebbins)

Stebbins studied music in Buffalo and Rochester, New York, then became a singing teacher. Around 1869, he moved to Chicago, Illinois, to join the Lyon and Healy Music Company. He also became the music director at the First Baptist Church in Chicago. It was in Chicago that he met the leaders in the Gospel music field, such as George Root, Philip Bliss, & Ira Sankey. At age 28, Stebbins moved to Boston, Massachusetts, where he became music director at the Claredon Street Baptist Church; the pastor there was Adoniram Gordon. Two years later, Stebbins became music director at Tremont Temple in Boston. Shortly thereafter, he became involved in evangelism campaigns with Moody and others. Around 1900, Stebbins spent a year as an evangelist in I… Go to person page >
^ top

There is a green hill far away

George Coles Stebbins (b. East Carlton, NY, 1846; d. Catskill, NY, 1945) composed THE GREEN HILL in 1877 to accompany Cecil F. Alexander's hymn “There Is a Green Hill Far Away.” The tune was published in Gospel Hymns No.3 (1878). The slow harmonic rhythm and mostly stepwise melody build to a climax in the last line. This music bears an animated tempo, but organists must be sure to tie over many of the bass tones.

Stebbins grew up on a farm and attended a small country school. At the age of thirteen he enrolled in a singing school and became so enthralled with music that he decided to make it his career. In 1869 he moved to Chicago, where he worked at the Lyon and Healy Music Company and became music director at the First Baptist Church. There he also became acquainted with famous gospel musicians Root (PHH 93), Bliss (PHH 479), and Sankey (PHH 73). In 1874 he moved to Boston and became music director of the Clarendon Baptist Church and later of Tremont Temple Baptist Church.

Associated with Dwight L. Moody and Ira D. Sankey from 1876 until 1899, Stebbins traveled on their evangelism campaigns throughout England and the United States as well as in India, Egypt, and Palestine. Along with Sankey and McGranahan, he edited and published three editions of Gospel Hymns (1878-1891). He also edited The Northfield Hymnal (1904) for Moody's Bible Conference in Massachusetts. Stebbins composed some fifteen hundred songs, many of them under the pseudonym "George Coles." His Reminiscences and Gospel Hymn Stories (1924) are a helpful account of gospel music in the urban revivals of the late nineteenth century.

Text: There Is a Green Hill Far Away

Text: 遠山迢迢，其色青青 (There is a green hill far away)
^ top 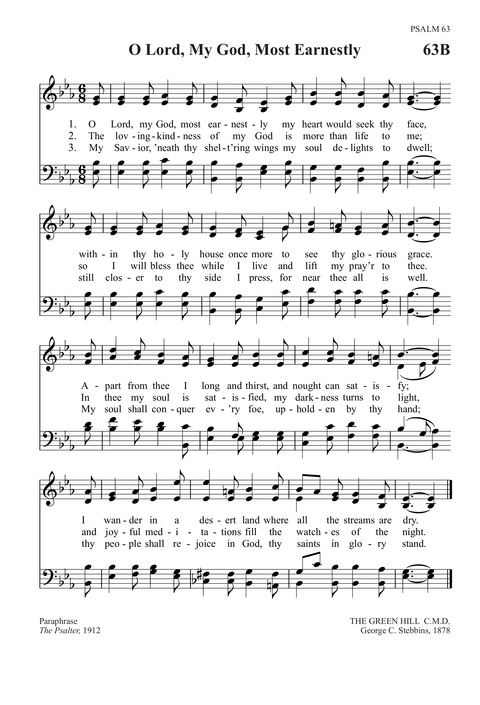