The text calls forth praise to God from the whole universe, from creatures on earth and from saints and angels in heaven. Concluding with praise for the Trinity, this doxology is likely the most well-known expression of the doctrine of the Trinity in hymn form.

A Prayer of Thanksgiving
Great God, we give you thanks for mountain majesty, for fields of amber grain, for the annual miracle of growth, for sunlight that makes water sparkle, and for your grace that crowns us with dignity. You are the God from whom all blessings flow. Amen.
— Cornelius Plantinga, Jr.
965

On Pentecost, many churches make an effort to celebrate the spread of the gospel throughout the whole world. Singing and praying in different languages has become a treasured way to celebrate both the unity and the diversity of the church.
This Pentecost, you may wish to sing the traditional Doxology in different languages. This setting in eleven languages was prepared for worship at the WCRC Assembly. It was sung at the same June 20 service of celebration mentioned above, and can be accessed at http://vimeo.com/13458569 at 1:12:56 (one hour and almost 13 minutes into the service). While listening to the large gathering singing, you can also see the doxology being signed (a twelfth language) and see a group of children from around the world dressed in festive clothing from their home cultures—another idea for your Pentecost celebration this year.
This is the best known tune from the Genevan Psalter, originally set to Psalm 134, but later often set to Psalm 100 (and therefore named old hundredth). It is probably the best known hymn tune in the world, and it was a thrill to sing it with thousands of Christians from around the world at this celebrative service.
(from Reformed Worship, Issue 99)
— Emily Brink
965

The practice of adding a Gloria Patri doxology to Old Testament psalms and New Testament canticles is an ancient tradition in the Christian church. After the Reformation, many Protestant groups kept up that practice; for example, Puritan psalters included various metrical versions of the Gloria Patri for use with the singing of the psalms in meter. This text is the most famous of such metrical doxologies. It was written by Thomas Ken, possibly as early as 1674, for the conclusion of each of his "Three Hymns for Morning, Evening, and Midnight." The three hymns were published in the 1695 edition of Ken's A Manual of Prayers (for use at Winchester College) and revised in the 1709 edition. Eventually, this doxology began to be used independently of Ken's hymn texts.
The text calls forth praise to God from the whole universe, from creatures on earth and from saints and angels in heaven. Concluding with praise for the Trinity, this doxology is likely the most well-known expression of the doctrine of the Trinity in hymn form.
The tune, GENEVAN 134, is probably the most sung church melody throughout the world. It is one of the noblest and most loved tunes in all of Christendom. It was composed by Louis Bourgeois and first published in the 1551 edition of the Genevan Psalter, which he also edited. The tune was originally composed for Psalm 134, but ever since it was set to Kethe’s setting of Psalm 100 in the Anglo-Genevan Psalter of 1561, the popular name for the tune has been OLD HUNDREDTH.
Lift Up Your Hearts retains the slightly altered version introduced by sixteenth-century English psalters: the last phrase of the melody originally began with three half notes. During the last few centuries GENEVAN 134 was usually sung in isorhythm (all notes of equal value).
Though GENEVAN 134 should be sung with conviction, its use for this text does not require the jubilant character of the doxology; the psalm text is rather a call to praise (st. 1) and a benediction (st. 2). Stanza 1 can be appropriately sung by the congregation in the traditional harmony, and stanza 2 by a minister or choir using the famous John Dowland setting (1621) with the melody in the tenor. For festive occasions (such as an ordination or a wedding), the congregation can conclude the psalm by singing the doxology.
— Bert Polman

Thomas Ken (b. Berkampstead, Hertfordshire, England, 1637; d. Longleat, Wiltshire, England, 1711) studied at Winchester College, Hart Hall, and New College, Oxford, England. Ordained in the Church of England in 1662, he served variously as pastor, chaplain at Winchester College (1669-1679), chaplain to Princess (later Queen) Mary in The Hague, and bishop of Bath and Wells (1685-1691). He was a man of conscience and independent mind who did not shirk from confrontations with royalty. When King Charles II came to visit Winchester, he took along his mistress, the famous actress Nell Gwynne. Ken was asked to provide lodging for her. The story is told that Ken quickly declared his house under repair and had a builder take off the roof! He later was dismissed from the court at The Hague when he protested a case of immorality. Then, later in 1688, Bishop Ken refused to read King James II's Declaration of Indulgence in the churches, which granted greater religious freedom in England, and he was briefly imprisoned in the Tower of London. A few years later he refused to swear allegiance to King William, and he lost his bishopric.
Ken wrote many hymns, which were published posthumously in 1721 and repub­lished in 1868 as Bishop Ken s Christian Year, or Hymns and Poems for the Holy Days and Festivals of the Church. But he is best known for his morning, evening, and midnight hymns, each of which have as their final stanza the famous doxology “Praise God, from Whom All Blessings Flow.”
— Bert Polman

Louis Bourgeois (b. Paris, France, c. 1510; d. Paris, 1561), in both his early and later years, wrote French songs to entertain the rich, but in the history of church music he is known especially for his contribution to the Genevan Psalter. Apparently moving to Geneva in 1541, the same year John Calvin returned to Geneva from Strasbourg, Bourgeois served as cantor and master of the choristers at both St. Pierre and St. Gervais, which is to say he was music director there under the pastoral leadership of Calvin. Bourgeois used the choristers to teach the new psalm tunes to the congregation.
The extent of Bourgeois's involvement in the Genevan Psalter is a matter of scholar­ly debate. Calvin had published several partial psalters, including one in Strasbourg in 1539 and another in Geneva in 1542, with melodies by unknown composers. In 1551 another French psalter appeared in Geneva, Eighty-three Psalms of David, with texts by Marot and de Beze, and with most of the melodies by Bourgeois, who supplied thirty­ four original tunes and thirty-six revisions of older tunes. This edition was republished repeatedly, and later Bourgeois's tunes were incorporated into the complete Genevan Psalter (1562). However, his revision of some older tunes was not uniformly appreciat­ed by those who were familiar with the original versions; he was actually imprisoned overnight for some of his musical arrangements but freed after Calvin's intervention. In addition to his contribution to the 1551 Psalter, Bourgeois produced a four-part harmonization of fifty psalms, published in Lyons (1547, enlarged 1554), and wrote a textbook on singing and sight-reading, La Droit Chemin de Musique (1550). He left Geneva in 1552 and lived in Lyons and Paris for the remainder of his life.
— Bert Polman 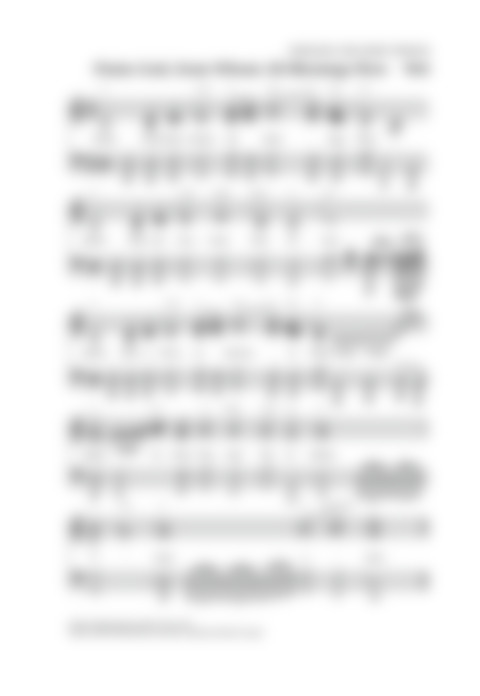