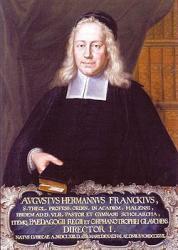 Francke, August Hermann, son of Johann Francke, a lawyer in Lubeck, was born at Lubeck, March 22, 1663. He studied at the Universities of Erfurt, Kiel, and Leipzig, graduated M.A. at Leipzig, 1685, and thereafter lectured on Biblical subjects at Leipzig for some time. About Michaelmas, 1687, he went to Lüneburg to work under the pious superintendent C. H. Sandhagen; and there while composing his first sermon (on St. John xx. 31) he underwent that change which made him call Lüneburg his spiritual birthplace. After spending the greater part of 1688 at Hamburg, he stayed two months with P. J. Spener at Dresden, and then returned about Lent, 1689, to Leipzig, where he resumed his Biblical lectures until the old orthodox party procured an edict forbidding them in the beginning of 1690. On March 10, 1690, he received a call to become diaconus of the Augustine Church at Erfurt, and there, by his stirring exhortations to renewal of heart, living faith and holy life, he drew many, even Roman Catholics, around him, but by a combination of the old orthodox Lutherans with the Romanists he was expelled from Erfurt, Sept. 27, 1691. After a lengthened visit to P. J. Spener, then Probst of St Nicholas's Church, Berlin, he was appointed by the Elector of Brandenburg, Dec. 22, 1691, as professor of Greek and the Oriental languages, and in 1698 ordinary professor of Theology in the University of Halle; being also appointed in 1691 preacher at St. George's Church in Glaucha (suburb of Halle), a post which he exchanged in 1715 for the pastorate of St. Ulrich's, Halle. After his left side was paralysed in Nov. 1726, he patiently endured much suffering till his death on June 8, 1727, at Halle ( Koch , iv. 305-322; Allgemeine Deutsche Biographie, vii. 219-231).

Francke was the spiritual son of P. J. Spener, and became one of the leaders in the " Pietistic" movement which so powerfully influenced Germany, 1680-1750, raised the tone of the community after the depression of the Thirty Years' War, revived the educational system, began systematic provision for the poor, and refined and purified domestic life. Francke was the spiritual leader and teacher, and under him and the band of professors that gathered to Halle, Halle became the headquarters of Pietism. During his time Halle sent out some 6000 graduates in theology, men imbued with his spirit, good exegetes, and devoted pastors, who spread their doctrines all over Germany, and in the early decades of the 18th cent, occupied a majority of the pulpits.
The extensive buildings at Halle, which now bear the title of the "Francke Institutions," are a monument of his simple faith and philanthropic zeal. He began at Easter, 1695, by opening a room in his house for instructing the poor children of Glaucha, with a capital of about thirteen shillings. About Whitsuntide, 1695, were the beginnings of the Paedagogium, 1697 of the Latin School, 1698 of the bookselling and apothecary businesses, 1705 of the mission to the East Indies, 1710 of the Bible Society. On a place formerly occupied by beer and dancing gardens, the foundation stone of the great Orphanage was laid July 13, 1698, in a spirit of humble faith in God and fervent prayer, trusting to Him for the means to pay for the work as it progressed; and week by week as they were needed the supplies came in from far and near. In this work, as in regard to his sermons and lectures, Francke had great opposition to meet, but the Commission of Enquiry which his enemies procured resulted in a cabinet order of 1702, which is the Charter of his Institutions. In 1727 there were 134 orphans in the orphanage; and besides these 2207 scholars in the various training schools, of whom some 360, as well as 225 poor students, received daily rations; while in 1863 the value of the buildings was about £45,000., and nearly 3500 scholars received instruction.

Distinguished as a professor, as a philanthropist, as a pastor, and as a preacher of gospel simplicity and soul-stirring earnestness, Francke was not prolific as a hymnwriter. Only three hymns are known by him, two of which are:—
i. Gottlob em Schritt zur Ewigkeit. New Year, first published in his Schrifftmässige Anweisung recht und Gott wolgefällig zu beten, Halle, 1695, p. 534, in 12 st. of 7 l., as a "Morning and Evening" hymn, entitled "The Voice of the Bride (‘When shall I come and appear before God?’), which she raises as often as she completes a step of her mortal life; and may be used by an upright and believing soul instead of the [usual] morning and evening hymn, as also at other times."
Reprinted in the Geistreiches Gesang-Buch, Halle, 1697, p. 294, Freylinghausen's Gesang-Buch, 1704, &c, and is No. 623 in the Unverfälschter Liedersegen 1851.

According to Koch, viii. 176-179, it was written immediately after his expulsion from Erfurt, Sept 27, 1691, while on his way to his mother's house at Gotha, and "in the experience of the overflowing consolation of the Holy Spirit." In the spirit of his favourite motto, "Quocunque die ante aeternitatem uno stamus pede," and based on 2 Cor. v. 6 and Rev. xxii. 17-20, it is modelled on a hymn by J. V. Andreä, 1636.
"Gottlob ein Schritt zur Ewigkeit
Ist abermals vorbei."
Koch adds that in his lifetime Francke found cases where this hymn had been blessed, that two days before his death he caused the hymn to be read to him, and said, "My faithful Jesus, I have given myself to Thee, soul and body that is sure;" and that on the day on which he died, June 8, 1727, this hymn was one of those sung at the choir meeting at Herrnhut.

Lauxmann, in Koch, viii. 508-512, speaks of this lady as one who suffered severe afflictions, but "what from without or from within pressed on her soul she bore in quiet waiting on the help of the Lord, of Whom she could at last gratefully say 'He hath done all things well.'" Lauxmann adds, "This hymn is also a beautiful clear mirror of Francke's own thought and conversation, heart and life experiences." In his Segensvolle Fussstapfen, 1709, he was able already to relate thirty instances in which the Lord had enabled him to receive, exactly at the time when he needed it, pecuniary help in answer to his prayers during the building and conducting of the great Orphanage at Halle.

Of this hymn (which should be read with the history of his great work at Halle) the only translation in common use is:—
What within me and without, a good and full translation by Miss Winkworth in the first edition of her Lyra Germanica, 1855, p. 126 (st. iii. being added in the 2nd ed., 1856), and thence as No. 139 in her Chorale Book for England, 1863. With the altered first line, "Lord, Thou art my Rock of strength," three centos are in American common use:—