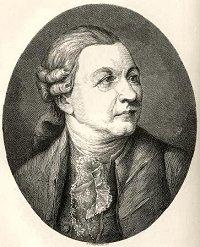 Klopstock, Friedrich Gottlieb, the eldest of the 17 children of Gottlob Heinrich Klopstock (then advocate and commissionsrath at Quedlinburg, and after 1735 amtmann at Friedeburg, on the Saale, near Halle), was born at Quedlinburg, July 2, 1724. From 1739 to 1745 he attended the famous school at Schulpforte, near Naumburg (where he conceived the first idea of his Messias); then he entered the University of Jena, in the autumn of 1745, as a student of theology, and the University of Leipzig at Easter, 1746. At Leipzig he made acquaintance with J. A. Cramer (q.v.); and became one of the contributors to the Bremer Beiträge, in which the first three books of his Messias appeared. In 1748 he became tutor in the house of a merchant named Weiss at Langensalza; and in 1750 accepted an invitation to visit Zurich (the literary capital of Switzerland), where his Messias had been received with great enthusiasm. He was then, in the spring of 1751, invited by the Danish prime minister, Count von Bernstorff, to take up his residence at the Court of King Frederick V., at Copenhagen, in order to be able to finish his Messias free from the cares of a profession; and was, in 1763, appointed Legationsrath. After the Count ceased, in the end of 1770, to be prime minister, Klopstock retired to Hamburg, in 1771, on a pension. The rest of his life was passed mainly at Hamburg, except about a year spent at Carlsruhe, at the Court of the Margave Carl Friedrich of Baden, who appointed him Hofrath. He d. at Hamburg, March 14, 1803, and was buried with civic honours on the 22nd, under a lime-tree in the churchyard at Ottensen (Koch, vi. 322; Allg. Deuteche Biog., xvi, 291, &c).

Klopstock ranks among the classic poets of Germany. In his Oden (collected at Hamburg, 1771; enlarged, Leipzig, 1798; finally enlarged, Leipzig, 1804) he is seen at his best; his earlier compositions of this class being the finest modern examples for perfection of form, lyric grace, majesty, and purity of rhythm. His most famous work is his Messias, which on its first appearance created an enthusiasm such as had not been awakened by any German work for centuries. It was suggested by Milton's Paradise Lost, but Milton's calm majesty, firmness of touch, and unity of action were all foreign to Klopstock's nature—his genius was lyric rather than epic. With all its defects of style and construction, it is still a noble work, and could only have been written by a true poet and a sincere Christian; though to us its interest perhaps consists as much in its historical importance and results as in its intrinsic merits. (Books 1-3 written in prose at Jena, and then in hexameter verse at Leipzig, and first pub. in the Neue Beyträge, Bremen, 1748. Books 1-3 revised, and 4, 5 added at Halle, 1751; 6-10 added in the Copenhagen ed., 1755; 11-15, Copenhagen, 1768; 16-20, Halle, 1773. Finally revised ed. in 4 vols., Leipzig, 1800.)

Friedrich Gottlieb Klopstock (German: [ˈklɔpʃtɔk]; 2 July 1724 – 14 March 1803) was a German poet. His best known work is the epic poem Der Messias ("The Messiah"). One of his major contributions to German literature was to open it up to exploration outside of French models.
Wikipedia Biography
TextsTunesHymnals