1 Amazing grace (how sweet the sound)
that saved a wretch like me!
I once was lost, but now am found,
was blind, but now I see.


2 'Twas grace that taught my heart to fear,
and grace my fears relieved;
how precious did that grace appear
the hour I first believed!


3 Through many dangers, toils and snares
I have already come:
'tis grace has brought me safe thus far,
and grace will lead me home.


4 The Lord has promised good to me,
his word my hope secures;
he will my shield and portion be
as long as life endures.


5 Yes, when this flesh and heart shall fail,
and mortal life shall cease:
I shall possess, within the veil,
a life of joy and peace.


6 The earth shall soon dissolve like snow,
the sun forbear to shine;
but God, who called me here below,
will be forever mine.

One of the best loved and most often sung hymns in North America, this hymn expresses John Newton's personal experience of conversion from sin as an act of God's grace. At the end of his life, Newton (b. London, England, 1725; d. London, 1807) said, “There are two things I'll never forget: that I was a great sinner, and that Jesus Christ is a greater Savior!” This hymn is Newton's spiritual autobiography, but the truth it affirms–that we are saved by grace alone–is one that all Christians may confess with joy and gratitude.

Newton was born into a Christian home, but his godly mother died when he was seven, and he joined his father at sea when he was eleven. His licentious and tumultuous sailing life included a flogging for attempted desertion from the Royal Navy and captivity by a slave trader in West Africa. After his escape he himself became the captain of a slave ship. Several factors contributed to Newton's conversion: a near-drowning in 1748, the piety of his friend Mary Catlett, (whom he married in 1750), and his reading of Thomas à Kempis' Imitation of Christ. In 1754 he gave up the slave trade and, in association with William Wilberforce, eventually became an ardent abolitionist. After becoming a tide-surveyor in Liverpool, England, Newton came under the influence of George Whitefield and John and Charles Wesley (PHH 267) and began to study for the for the ministry. He was ordained in the Church of England and served in Olney (1764-1780) and St. Mary Woolnoth, London (1780-1807). His legacy to the Christian church includes his hymns as well as his collaboration with William Cowper (PHH 434) in publishing Olney Hymns (1779), to which Newton contributed 280 hymns, including “Amazing Grace.”

"Amazing Grace" was published in six stanzas with the heading "1 Chronicles 17:16-17, Faith's review and expectation."

Four of his original stanzas are included in the Psalter Hymnal along with a fifth anonymous and apocalyptic stanza first found in A Collection of Sacred Ballads (1790). The fifth stanza was first published separately in the 1859 edition of The Sacred Harp and joined to Newton's text in Edwin O. Excell's Coronation Hymns (1910); it has been associated with Newton's text ever since. The Hymnal 1982 Companion calls it "an example of a 'wandering' stanza in [common meter] that appears at the end of a variety of hymns in nineteenth-century hymnals" (Vol. Three B, 671).

Liturgical Use:
Many occasions of worship when we need to confess with joy that we re saved by God's grace alone; as a hymn of response to forgiveness of sin or as an assurance of pardon; as a confession of faith or after the sermon.

Amazing grace, how sweet the sound. J. Newton. [Grace.] No. 41, Book i. of the Olney Hymns, 1779, in 6 stanzas of 4 lines, entitled "Faith's Review and Expectation," and based upon i. Chron. xviii. 16, 17. In Great Britain it is unknown to modern collections, but in America its use is extensive. It is far from being a good example of Newton's work.

NEW BRITAIN (also known as AMAZING GRACE) was originally a folk tune, probably sung slowly with grace notes and melodic embellishments. Typical of the Appalachian tunes from the southern United States, NEW BRITAIN is pentatonic with melodic figures that outline triads. It was first published as a hy…

All tunes published with 'Amazing grace! (how sweet the sound)'^ top

If America had a national folk hymn, this would probably be it. This well-loved and oft-sung hymn, written by John Newton in the late eighteenth century, is a powerful assurance and declaration of the grace of God working in all our lives. When Newton was just eleven, he joined his father at sea and began a tumultuous life in the Navy, eventually becoming captain of a slave ship. In a period of four years, however, his life was drastically turned around: he nearly drowned, he married a very pious Mary Catlett, and he read through Thomas à Kempis’ Imitation of Christ. In 1754 he gave up the slave trade and joined forces with the great abolitionist, William Wilberforce. A number of years later, he was ordained for ministry, and soon after wrote this great text, declaring that we are saved only the grace of God. Newton wrote, “I can see no reason why the Lord singled me out for mercy…unless it was to show, by one astonishing instance, that with him 'nothing is impossible'” (Newton, The Life of John Newton). As we sing the very familiar words of this hymn, how powerful it is to think of ourselves as an “astonishing instance” of God’s grace and mercy.

Newton was ordained for ministry in the Church of England in the early 1760s, and in 1779, collaborated with William Cowper to publish the Olney Hymns, one of whch was the now famous "Amazing Grace." Originally titled “Faith’s Review and Expectations,” Newton’s hymn included six stanzas. Most hymnals today use the first four stanzas from Newton’s text, as well as a fifth anonymous stanza first found in A Collection of Sacred Ballads (1790), and sung along with Newton’s text ever since. The original text has not been much altered, though some additions have been made – Chris Tomlin’s added refrain, for example: “My chains are gone, I’ve been set free - my God my Savior has ransomed me. And like a flood, his mercy reigns; unending love, amazing grace.”

The Appalachian tune NEW BRITAIN first appeared in Southern Harmony; in a later edition, it was also evidently set to Newton’s text for the first time. The modern harmonization is credited to Edwin Othello Excell, who is also credited with first attaching the final stanza in his 1910 Coronation Hymns.

One of, if not the most popular hymn in the United States, this hymn has been performed by countless artists and arranged to many different styles. Because of its simple folk melody, it can be sung as a round, and it also works well to sing at least one verse a cappella.

Some songs that could be paired with this hymn in a worship service are “Grace Unmeasured” by Sovereign Grace Ministries, “Your Grace Is Enough” by Chris Tomlin, “When I think about the Lord” by Hillsong United, and so many more songs that speak about Christ’s redemptive work in us. 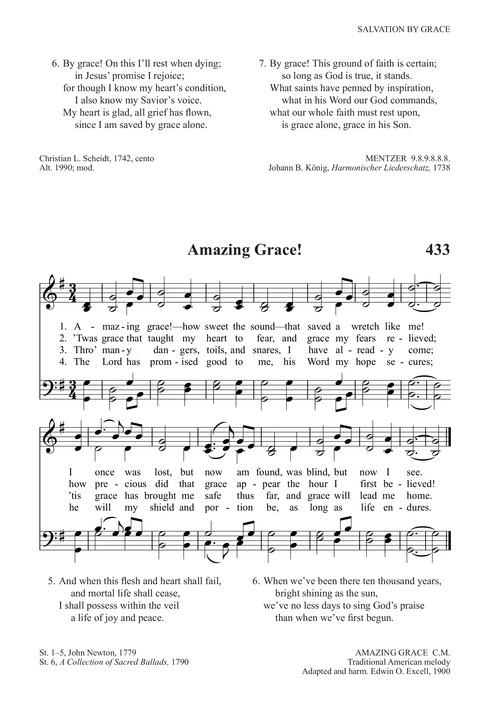 Hymns for a Pilgrim People #334

Hymns of Glory, Songs of Praise #555a

Hymns of Glory, Songs of Praise #555b

Hymns of the Christian Life #197

Sacred Selections for the Church #257

The Book of Hymns (A fresh anthology of favourite hymns) #29

Include 1196 pre-1979 instances
All instances^ top
Suggestions or corrections? Contact us