Have Thine Own Way, Lord

Have Thine own way, Lord!

Not to be confused with Adelaide A. Procter Go to person page >
^ top

Periodically distressed after being unable to raise money to go to Africa as a missionary in the late 1890s, Adelaide A. Pollard (b. Bloomfield, IA, 1862; d. New York, NY, 1934) attended a prayer meeting in 1902 and was inspired after hearing an older woman pray, "It really doesn't matter what you do with us, Lord–just have your way with our lives." Pollard went home and meditated on the potter's story in Jeremiah 18 (the same image is also in Isa. 64:8) and wrote the consecration hymn "Have Thine Own Way, Lord." Repeating the words "Have thine own way," each stanza emphasizes the believer's harmony with God's will. This is a deeply personal prayer that culminates in a strong plea that others may see Christ in the believer through the power of the Holy Spirit (st. 4).

Originally called Sarah, Pollard chose the name Adelaide for herself. She studied speech at the Boston School of Oratory and taught in several girls' schools in Chicago, Illinois. Influenced by the evangelist R. A. Torrey, she enrolled as a student at the Moody Bible Institute in Chicago and later taught at the Missionary Training School of the Christian Missionary Alliance in Nyack-on-the Hudson, New York. A missionary in Africa prior to World War I, she devoted the last years of her life to Christian mysticism.

Liturgical Use:
For believers to dedicate themselves individually and collectively to follow the will of the Lord; stanza 2 suggests use in the service of confession and forgiveness, but as a whole the song fits best as a post-sermon hymn.

All tunes published with 'Have Thine Own Way, Lord'^ top

After having her hopes of doing missionary work crushed, hymn author Adelaide Pollard became inspired to write a hymn about God working in her life. Written in just a single night, “Have Thine own way, Lord” quickly got published in multiple hymnals. The hymn gives full control over to God, begging him to transform our lives and to work his will in everyone. This classic hymn has reminded generations of believers to submit to God’s will at all times and in all circumstances.

Adelaide Pollard wrote the text of this hymn after attending a prayer service in 1902. She had dreamed of being in the mission field in Africa, but was unable to go due to financial instability. When she heard an elderly woman at the prayer meeting say, “It really doesn’t matter what you do with us Lord, just have your own way with our lives,” Pollard was inspired. She wrote all four stanzas that night before bed. The line which says, “Thou art the Potter, I am the clay,” was inspired by the story of the potter in Jeremiah 18:3. The text surrenders all control to the Lord, invoking his spirit to cleanse, mold, and transform.

Five years after the text had been written, George Stebbins specifically wrote a tune for Pollard’s hymn, entitled ADELAIDE. He wrote the tune in 1907 the hymn was first published the same year in “Northfield Hymnal with Alexander’s Supplement.” The melody is serviceable, but is probably best sung in parts.

This hymn is good for a service of renewal, but should not be limited to any specific part of the Church year. As a whole, this is best used as a post-sermon hymn. This hymn should be sung flowingly in parts.

50 Favorites: and July 2013 index of supplement to Evening Light Songs #14 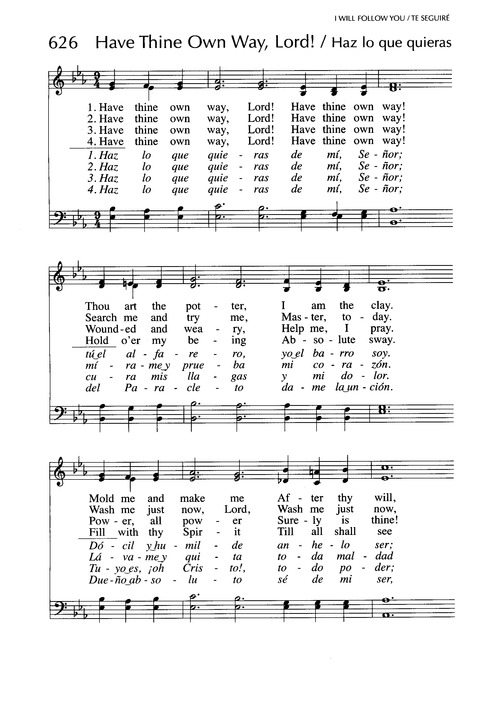 Great Songs of the Church (Revised) #597

Hymns for a Pilgrim People #366

Hymns of the Christian Life #226

Rock of Ages A Worship and Songbook for Retirement Living #55

Display Title: Have Thine Own Way, Lord First Line: Have thine own way, Lord! Date: 2002
Rock of Ages A Worship and Songbook for Retirement Living #55

Sacred Selections for the Church #84

The Hymnal for Worship and Celebration #371

The Song Book of the Salvation Army #487