About 150 years ago, there was a great revival in Wales, England. As a result of this, many missionaries came from England and Germany to North-East India to spread the Gospel. At the time, north-east India was not divided into many states as it is today. The region was known as Assam and comprised hundreds of tribes...Naturally, they were not welcomed. One Welsh missionary succeeded in converting a man, his wife, and two children. This man’s faith proved contagious and many villagers began to accept Christianity. Angry, the village chief summoned all the villagers. He then called the family who had first converted to renounce their faith in public or face execution. Moved by the Holy Spirit, the man instantly composed a song which became famous down the years. He sang:

-Dr. P.P. Job and Indian preacher in His book “Why God Why”

A Traditional Indian tune, ASSAM comes from the city of Assam, India where the text was originated.

All tunes published with 'I Have Decided to Follow Jesus'^ top

As this hymn of commitment is sung, think about what it really means to follow Jesus. When someone volunteered to follow Him, Jesus' response was “Foxes have holes, and birds of the air have nests, but the Son of Man has nowhere to lay his head” (Luke 9:58 ESV). This seems almost brutal, but it is true. The author of this hymn was most likely a convert in India facing persecution and possibly death for this commitment. As expressed through the song, this Christian had taken to heart Jesus' warning: “No one who puts his hand to the plow and looks back is fit for the kingdom of God” (Luke 9:62 ESV).

There are a variety of different stories about the origin of this hymn. All of them agree that it was written in northeastern India by someone facing persecution for his or her faith who wanted to affirm loyalty to Christ. In some accounts, an Indian convert is the author. One of the more dramatic and widespread stories comes from the book Why God, Why? by Dr. P. P. Job, in which a Christian missionary first sang this song as he and his family were being murdered for their faith.

Whatever its origin, this song has been passed down as a folk song, and the number of stanzas and their content varies. Three stanzas appear in virtually every version. The opening stanza is always “I have decided.” “The world behind me” and “Though none go with me” are always included, in some order. Another common stanza is “Will you decide now to follow Jesus?” which is usually fourth. Some hymnals do not include this hymn because it implies, especially in the opening line, that salvation is purely a human decision.

This text is always sung to the melody that was passed down with it – ASSAM, which is named after a region in northeastern India. It is an Indian folk song, probably from the Garo tribe. This tune is quite flexible in terms of accompaniment style and tempo. Choose a tempo that will accentuate the desired mood, whether it is slow for quiet meditation on the seriousness of commitment to Christ, or a more upbeat, march-like style. It is simple enough to be easily learned, and therefore could work very well unaccompanied.

This song is appropriate whenever a song of commitment is desired. For use as service or special music, a variety of choral settings exist, often combining this text with another. “No Turning Back with 'I Have Decided to Follow Jesus'” combines this folk hymn with an original song by Joel Raney for SATB choir, unison choir (either children or adult voices), and rhythm section. “I Have Decided to Follow Jesus” is a slow, contemplative choral arrangement of this simple song. Another setting of “I Have Decided to Follow Jesus” includes a stanza of “He Leadeth Me” in a three-part choral setting. This combination of texts reminds us that, though we may claim to have “made a decision” to follow Christ, nevertheless God is the One who leads us. 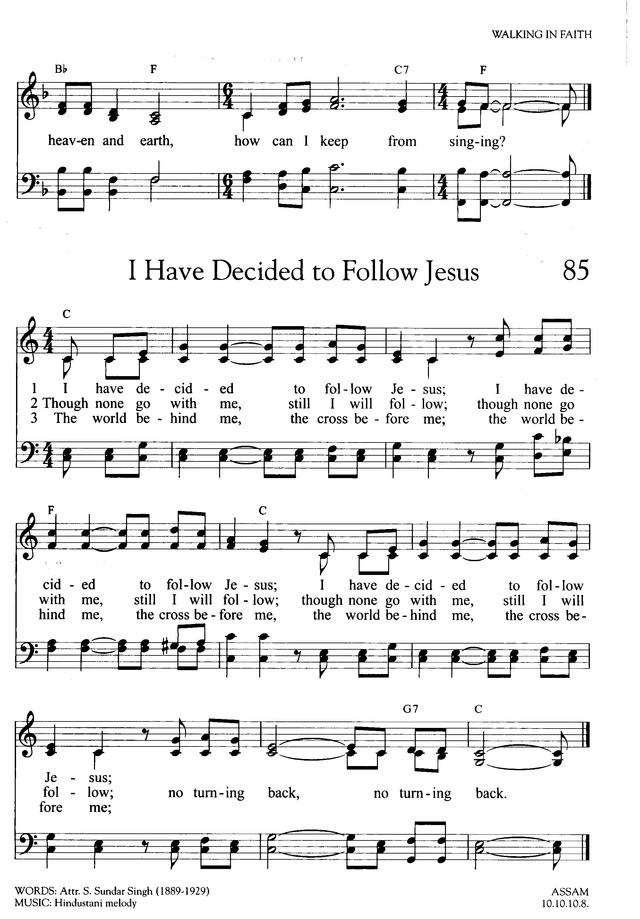 Hymns for a Pilgrim People #322

The Hymnal for Worship and Celebration #376