All to Jesus I surrender

1 All to Jesus I surrender,
All to Him I freely give;
I will ever love and trust Him,
In His presence daily live.


2 All to Jesus I surrender,
Make me, Savior, wholly Thine;
Let me feel Thy Holy Spirit,
Truly know that Thou art mine. [Refrain]


3 All to Jesus I surrender,
Lord, I give myself to Thee;
Fill me with Thy love and power,
Let Thy blessing fall on me. [Refrain] 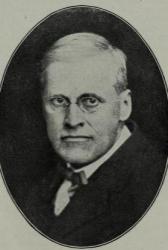 Judson W. Van DeVenter was born 15 December 1855 on a farm near the village of Dundee, Michigan. He was educated in the country and village schools, and at Hillsdale College. He later moved to St. Petersburg, Florida. He wrote about 100 hymns. Dianne Shapiro, from "The Singers and Their Songs: sketches of living gospel hymn writers" by Charles Hutchinson Gabriel (Chicago: The Rodeheaver Company, 1916) Go to person page >
^ top

All tunes published with 'I Surrender All'^ top

It is human nature to seek power and accomplishment through conflict, hence the popularity of athletic contests. Defeat in a championship game is humiliating, and giving up is even more so. Nevertheless, Christ calls His followers to totally surrender themselves to Him. He described it this way: “Or what king, going out to encounter another king in war, will not sit down first and deliberate whether he is able with ten thousand to meet him who comes against him with twenty thousand? And if not, while the other is yet a great way off, he sends a delegation and asks for terms of peace. So therefore, any one of you who does not renounce all that he has cannot be my disciple.” (Luke 14:31-33 ESV)

Judson W. Van De Venter was a painter turned evangelist who wrote this hymn in 1896. He said that it was written “in memory of the time when, after a long struggle, I had surrendered and dedicated my life to active Christian service. The song was written while I was conducting a meeting at East Palestine, Ohio…” (Companion to Baptist Hymnal, William J. Reynolds, p. 33). The hymn originally had five stanzas, but the last is usually omitted (the second line is “Now I feel the sacred flame”).

The theme of the hymn is the qualities that total surrender to God requires: free choice, humility, desire for relationship, and an attitude of reception toward God’s blessings. The refrain and the first line of each stanza repeat the statement of commitment – “I surrender.”

Winfield S. Weeden was the musician who worked with Van De Venter in his evangelistic meetings. He wrote the tune SURRENDER for this text in 1896. Text and tune were first published together that same year in Gospel Songs of Grace and Glory, which was compiled by Weeden, Van De Venter, and Leonard Weaver. The original arrangement of this tune featured two-part harmony on the stanza and four-part harmony on the refrain with echoes between the men’s and women’s voices. In modern hymnals, the entire hymn is usually given in four parts.

This hymn can be used year round as a song of response or devotion. It can be sung by the congregation with simple accompaniment to allow for reflection on the seriousness of the commitment embodied in the song. If the worship leader deems it appropriate for the occasion, an instrumental setting may be used either in place of or prior to the singing as a backdrop for contemplation and silent prayer. Two examples are a handbell setting of “I Surrender All” (handchimes are listed as optional, but their different timbre adds clarity to the melody) and the arrangement of the title hymn in the piano collection “I Surrender All." 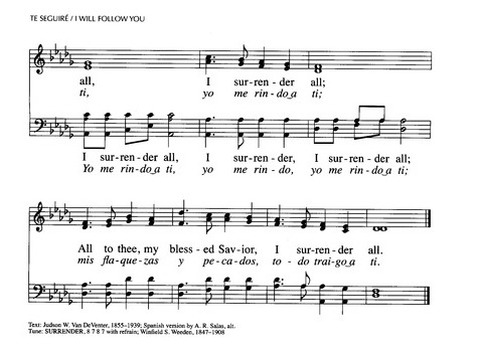 Hymns for a Pilgrim People #369

Hymns of the Christian Life #216

Sacred Selections for the Church #98

The Hymnal for Worship and Celebration #366

The Song Book of the Salvation Army #474

Display Title: I surrender all, I surrender all First Line: All to Jesus I surrender Author: Judson Van de Venter (1855-1939) Date: 1986 Subject: The life of holiness | Consecration and service
The Song Book of the Salvation Army #474