I Know Not Why God's Wondrous Grace

1 I know not why God’s wondrous grace
to me is daily shown,
nor why, with mercy, Christ in love
redeemed me for his own.


Refrain:
But “I know whom I have believed,
and am persuaded that he is able
to keep that which I’ve committed
unto him against that day.”


2 I know not how this saving faith
to me he did impart,
nor how believing in his word
wrought peace within my heart. [Refrain]


3 I know not how the Spirit moves,
convincing us of sin,
revealing Jesus through the Word,
creating faith in him. [Refrain]


4 I know not when my Lord may come,
at night or noon-day fair,
nor if I’ll walk the vale with him,
or meet him in the air. [Refrain] 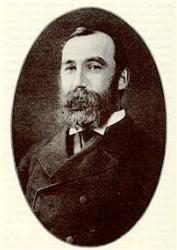 The text contrasts the "I know not" stanzas with the certainty of the "I know" refrain We cannot understand God's saving grace to us (st. 1); we cannot explain our spiritual birth (st. 2); we are unable to comprehend the work of God's Spirit (st. 3); and we do not perceive clearly the future of our earthly lives (st. 4). But we do know by faith that God is true to his word!

Whittle was a bank cashier, Civil War soldier, and company treasurer before he became an evangelist. Earning the title of major during his military career, he was called Major Whittle throughout his life. Because of the influence of Dwight L. Moody whom he met during the war, Whittle became an itinerant evangelist in 1873. He conducted evangelistic campaigns in North America and Great Britain, often accompanied by popular gospel singers such as Philip P. Bliss (PHH 482), James McGranab and George Stebbins (PHH 63). These men not only sang at Whittle’s evangelistic meetings but also set to music many of his two hundred hymn texts (which he usually wrote under the pseudonym "El Nathan").

Liturgical Use:
As a hymn of response to preaching; for times of renewal; profession of faith; other testimonial services.

[I know not why God's wondrous grace] (McGranahan)

James McGranahan (PHH 99), Whittle's song leader, composed EL NATHAN. The tunes title is a pseudonym used by Whittle. A typical gospel hymn tune, EL NATHAN is constructed with a few melodic lines and a very simple harmony, but it is marked by some rhythmic interest. The tune is easily sung in parts.… Display Title: I know not why First Line: I know not why God's wondrous grace Tune Title: I KNOW WHOM I HAVE BELIEVED Author: Daniel Webster Whittle, 1840-1901 Meter: CM with refrain Date: 1999
Complete Mission Praise #279

Hymns for a Pilgrim People #362

Display Title: But “I know whom I have believed First Line: I know not why God's wondrous grace to me He hath made known Tune Title: EL NATHAN Date: 2006
The Christian Life Hymnal #535

The Hymnal for Worship and Celebration #409

The Song Book of the Salvation Army #730

Display Title: Bur I know whom I have believed First Line: I know not why God's wondrous grace Author: Daniel Webster Whittle (1840-1901) Date: 1986 Subject: The salvation soldier | Faith and trust
The Song Book of the Salvation Army #730