Living for Jesus a life that is true

1. Living for Jesus, a life that is true,
Striving to please Him in all that I do;
Yielding allegiance, glad-hearted and free,
This is the pathway of blessing for me.


Refrain:
O Jesus, Lord and Savior, I give myself to Thee,
For Thou, in Thy atonement, didst give Thyself for me;
I own no other Master, my heart shall be Thy throne;
My life I give, henceforth to live, O Christ, for Thee alone.


2. Living for Jesus Who died in my place,
Bearing on Calv’ry my sin and disgrace;
Such love constrains me to answer His call,
Follow His leading and give Him my all.


3. Living for Jesus, wherever I am,
Doing each duty in His holy Name;
Willing to suffer affliction and loss,
Deeming each trial a part of my cross.


4. Living for Jesus through earth’s little while,
My dearest treasure, the light of His smile;
Seeking the lost ones He died to redeem,
Bringing the weary to find rest in Him. 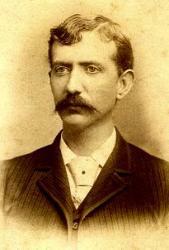 Thomas O. Chisholm was born in Franklin, Kentucky in 1866. His boyhood was spent ona farm and in teaching district schools. He spent five years as editor of the local paper at Franklin. He was converted to Christianity at the age of 26 and soon after was business manager and office editor of the "Pentecostal Hearld" or Louisville, Ky. In 1903 he entered the ministry of the M. E. Church South. His aim in writing was to incorporate as much as Scripture as possible and to avoid flippant or sentimental themes. Dianne Shapiro, from "The Singers and Their Songs: sketches of living gospel hymn writers" by Charles Hutchinson Gabriel (Chicago: The Rodeheaver Company, 1916)… Go to person page >
^ top

Composer C. Harold Lowden stated the following about this hymn:

In 1915 I wrote a "light and summery" type of gospel song entitled 'The Sunshine Song" for children's services. It became quite popular, and many pastors wrote to me that the music should be saved, and more general words wedded to it. I came across a copy of it in my files in 1917 and played it over. The rhythm and tempo suggested the words "Living for Jesus." . . . I decided to ask T. O. Chisholm to write the words. I mailed him a copy of the music and suggested the title and the type of refrain which I thought it deserved. In a day or so, Mr. Chisholm returned it to me, saying he didn't have the slightest idea as to the method used in writing words to music. I sent the material back to him immediately, telling him I believed God had led me to select him, and suggesting that he permit God to write the poem. Within a couple of weeks he had completed the writing of the words.

Thus the author, Thomas O. Chisholm (b. Franklin, KY, 1866; d. Ocean Grove, NJ, 1960), wrote "Living for Jesus" in 1917. Although he had little formal education, Chisholm served at various times as a teacher, editor, and pastor. He also wrote more than twelve hundred poems and hymn texts. Chisholm's accomplishments included being associate editor of his hometown newspaper, The Franklin Advocate, and editor of the Pentecostal Herald. He was ordained in the Methodist Church but served only briefly as a pastor in Scottsville, Kentucky, because of poor health. After that he sold life insurance in Winona Lake, Indiana, and Vineland, New Jersey. His devotional poetry and hymn texts were published primarily in religious periodicals.
His wrote his text to fit Lowden's tune in four stanzas and a refrain. Stanza 3 in the Psalter Hymnal collates phrases from stanzas 3 and 4 of Chisholm's original text. The text and tune were first published together in Uplifting Songs (1917), a hymnal compiled by Lowden and Rufus W. Miller.

This is a hymn of total consecration and dedication in which we commit to "living for Jesus" in all that we do (st. 1) and wherever we are (st. 3) in response to Christ's sacrifice (st. 2; refrain). "Living for Jesus" is well known in the Christian Reformed Church as the theme song of the Calvinist Cadet Corps, a church-related organization for young boys.

Liturgical Use:
Most often as a post-sermon hymn; also as a hymn of dedication or commitment at a suitable place in the worship service.

[Living for Jesus a life that is true] (Lowden)

LIVING FOR JESUS is a gospel hymn tune distinguishable by its dactylic rhythm for the stanzas and its straightforward iambic refrain. The guitar chords avoid some of the chromaticism of the original harmony; when using guitar, do not use keyboard. Singing the refrain only once–at the end of stanza…

All tunes published with 'Living for Jesus'^ top 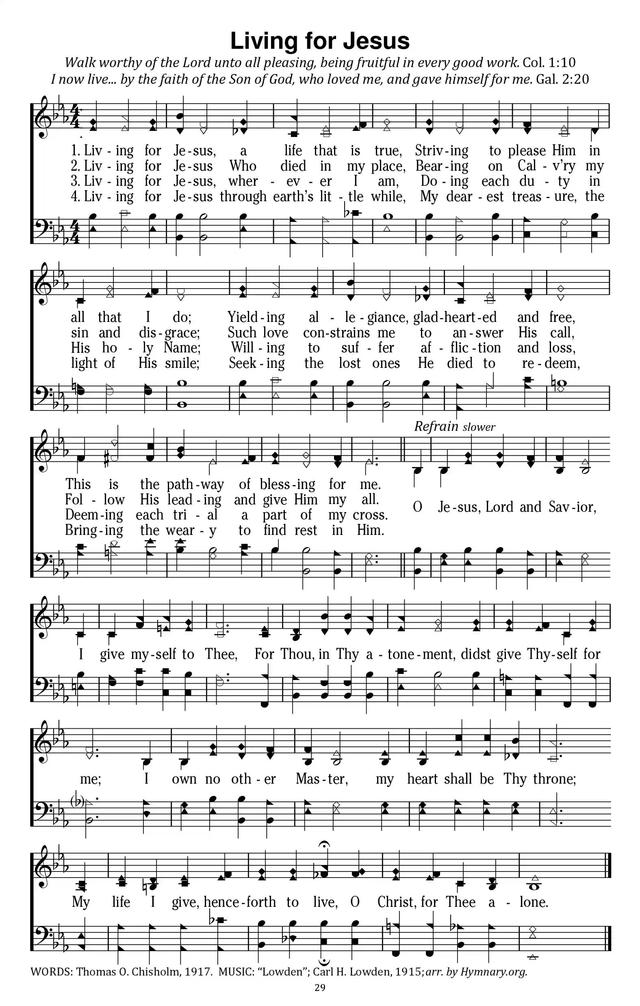 The Hymnal for Worship and Celebration #372