Ah! Lord, how shall I meet Thee

Ah! Lord, how shall I meet Thee

1 O Lord, how shall I meet you,
how welcome you aright?
Your people long to greet you,
my hope, my heart's delight!
O kindle, Lord Most Holy,
your lamp within my breast
to do in spirit lowly
all that may please you best.


2 Love caused your incarnation,
love brought you down to me;
your thirst for my salvation
procured my liberty.
O love beyond all telling,
that led you to embrace,
in love all love excelling,
our lost and fallen race!


3 Rejoice, then, you sad-hearted,
who sit in deepest gloom,
who mourn o'er joys departed
and tremble at your doom.
Despair not, he is near you,
yea, standing at the door,
who best can help and cheer you
and bids you weep no more.


4 Sin's debt, that fearful burden,
let not your souls distress;
your guilt the Lord will pardon
and cover by his grace.
He comes, for men procuring
the peace of sin forgiv'n,
for all God's sons securing
their heritage in heav'n.


5 You come, O Lord, with gladness,
in mercy and goodwill,
to bring an end to sadness
and bid our fears be still.
In patient expectation
we live for that great day
when a renewed creation
your glory shall display.

The original text was inspired by Matthew 21:1-9, the Gospel reading for the first Sunday of Advent in the old Lutheran lectionary. Like so many of the psalms that use the first-person pronoun ("I"), this text moves from the personal welcome of the Savior (st. 1), to a confession of the reason for Christ's incarnation (st. 2), to the church's expectation of Christ's return (st. 3).

The English translation of stanzas 1 and 2 is based on that of Catherine Winkworth (PHH 194) in her Chorale Book for England (1863). Bert Polman (PHH 37) translated stanza 3 for the 1987 Psalter Hymnal.

Gerhardt studied theology and hymnody at the University of Wittenberg and then was a tutor in Berlin, where he became friends with Johann Cruger (PHH 42). He served the Lutheran parish of Mittenwalde near Berlin (1651-1657) and the great St. Nicholas' Church in Berlin (1657-1666). Friederich William, the Calvinist elector, had issued an edict that forbade the various Protestant groups to fight each other. Although Gerhardt did not want strife between the churches, he refused to comply with the edict because he thought it opposed the Lutheran "Formula of Concord," which condemned some Calvinist doctrines. Consequently, he was released from his position in Berlin in 1666. With the support of friends he became archdeacon at Lubben in 1669 and remained there until his death. Gerhardt experienced much suffering in his life; he and his parishioners lived in the era of the Thirty Years' War, and his family experienced incredible tragedy: four of his five children died young, and his wife died after a prolonged illness. In the history of hymnody Gerhardt is considered a transitional figure-he wrote at a time when hymns were changing from a more objective, confessional, and corporate focus to a pietistic, devotional, and personal one. Like other German hymns, Gerhardt's were lengthy and intended for use throughout a service, a group of stanzas at a time. More than 130 of his hymns were published in various editions of Cruger's Praxis Pietatis Melica, the Crüger-Runge Gesangbuch (1653), and
Ebeling's Das andere Dutzeud geistliche Andachtslieder Herrn Paul Gerhardts (1666-1667). John Wesley (PHH 267) and Catherine Winkworth (PHH 194) both made famous English translations of Gerhardt's texts.

Liturgical Use:
Worship services of renewal and penitence during Advent; worship that focuses on Christ's return; Palm Sunday, especially with the alternate tune ST. THEODOLPH (375 and 376).

Johann Crüger composed WIE SOLL ICH DICH EMPFANGEN for Gerhardt's text and published the tune in 1653; the tune name is the German incipit of Gerhardt's text. Enhancing a sense of personal and communal meditation, the tune gives reflective support to this text. The tune is in isorhythmic form (all…

All tunes published with 'Ah! Lord, how shall I meet Thee'^ top 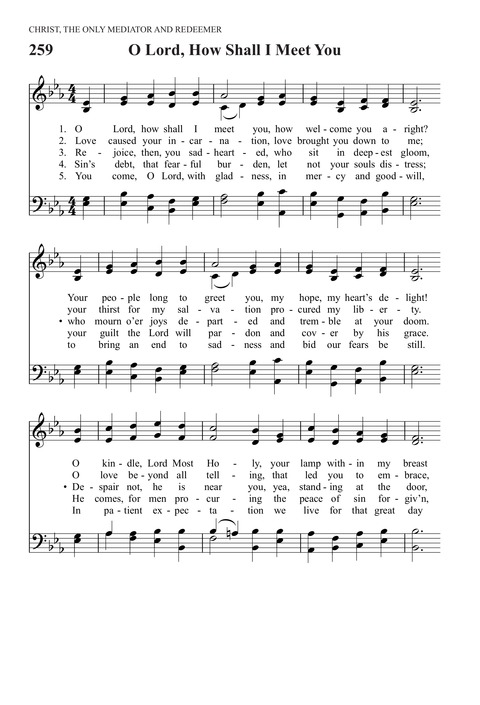 A New Hymnal for Colleges and Schools #217

Hymns for a Pilgrim People #104

The Book of Common Praise of the Reformed Episcopal Church #21

The Book of Common Praise of the Reformed Episcopal Church #22