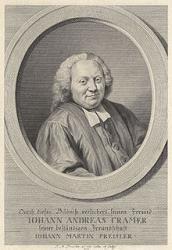 Cramer, Johann Andreas, born Jan. 27, 1723, at Jönstadt or Johann-Georgen-Stadt, in the Saxon Harz, where his father was pastor. After studying at the University of Leipzig, where he graduated M.A. in 1745, he was in 1748 appointed preacher at Crellwitz, near Lützen, and in 1750 Court Preacher and member of the Consistory at Quedlinburg. Four years later he became German Court Preacher to King Frederick V. of Denmark, at Copenhagen. There he obtained great fame as a preacher and teacher; and was appointed in 1765 Professor of Theology in the University. But after the accession of Charles VII., in 1766, the free-thinking party in the State gradually gained the ascendancy, and procured his removal; whereupon he was appointed, in 1771, Superintendent in Lubeck. When the orthodox party regained power in 1774, he was recalled to Denmark, as Vice-Chancellor, and First Professor of Theology in the University of Kiel, and in 1784 Chancellor. He died at Kiel on the night of June 11-12, 1788 (Koch, vi. 334-344; Allgemeine Deutsche Biographie, iv. 550-551; Bode, pp. 54-55—the last dating his birth, Jan. 29).

Cramer was rather a writer of religious lyrics than of hymns, though at least 80 of his compositions passed Into the hymn-books of his times. Those that have been translated into English are all included either in the Allgemeines Gesang-
Buch, Altona, 1780, which he edited for use in Schleswig-Holstein, or in his Sämmtliche Gedichtet Leipzig, 1782-3.