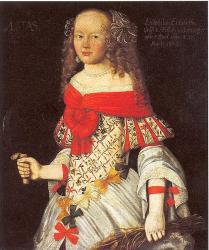 Ludämilia Elisabeth, second daughter of Count Ludwig Gunther I. of Schwarzburg-Rudolstadt, was born April 7, 1640, at the castle of Heidecksburg, near Rudolstadt, and was educated there along with her cousin Emilie Juliane (q.v.). In 1665 she went with her mother to the dowager castle of Friedensburg near Leutenberg; but after her mother's death, in 1670, she returned to Rudolstadt, where, on Dec. 20, 1671, she was formally betrothed to Count Christian Wilhelm of Schwarzburg-Sondershausen. At this time measles was raging in the district, and her eldest sister, Sophie Juliane, was seized, and died Feb. 14, 1672. By attending on her, Ludämilia and the youngest sister, Christiane Magdalene, caught the infection, and both died at Rudolstadt on March 12,1672. (Koch, iv. 50-56; Allgemeine Deutsche Biographie xix. 365-367, &c.)

She received a careful and pious training, was a good Latin scholar, and well read in divinity and other branches of learning. Her hymns show her to have been of a deeply pious nature, and of intense love to Jesus. They were composed rather for her own edification than for use in public worship. Ten of them were included in the Budolstadt Gesang-Buch, 1682. They, were collected, to the number of 206, and edited by her cousin Emilie (probably assisted by A. Fritsch) as Die Stimme der Freundin, das ist: Geistliche Lieder welche, aus brünstiger und biss ans Ende beharrter Jesus Liebe verfertiget und gebraucht, &c. Rudolstadt, 1687. This was reprinted, with an introduction by W. Thilo, at Stuttgart, 1856.