Switch back to the old search page.Advanced Search
Looking for other resources related to Singing? Check out PreachingandWorship.org.

I Will Sing unto the LORD

I Will Sing of My Redeemer

When We All Get To Heaven

I Will Sing the Wondrous Story 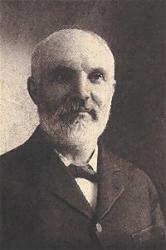 1843 - 1901 Person Name: R. E. H. Author (refrain) of "Blessed Be the Name of the Lord" in Timeless Truths Ralph Hudson (1843-1901) was born in Napoleon, OH. He served in the Union Army in the Civil War. After teaching for five years at Mt. Union College in Alliance he established his own publishing company in that city. He was a strong prohibitionist and published The Temperance Songster in 1886. He compiled several other collections and supplied tunes for gospel songs, among them Clara Tear Williams' "All my life long I had panted" (Satisfied). See 101 More Hymn Stories, K. Osbeck, Grand Rapids, MI: Kregel Publications, 1985). Mary Louise VanDyke
R. E. Hudson

b. 1947 Person Name: Christopher Harvey Walker, b. 1947 Composer of "[Sing of the Lord's goodness, Father of all wisdom]" in The Irish Presbyterian Hymbook
Christopher Walker 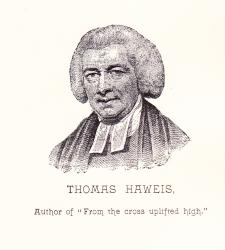 1734 - 1820 Person Name: T. Haweis Composer (melody, later form) of "RICHMOND" in Rejoice in the Lord Thomas Haweis (b. Redruth, Cornwall, England, 1734; d. Bath, England, 1820) Initially apprenticed to a surgeon and pharmacist, Haweis decided to study for the ministry at Oxford and was ordained in the Church of England in 1757. He served as curate of St. Mary Magdalen Church, Oxford, but was removed by the bishop from that position because of his Methodist leanings. He also was an assistant to Martin Madan at Locke Hospital, London. In 1764 he became rector of All Saints Church in Aldwinkle, Northamptonshire, and later served as administrator at Trevecca College, Wales, a school founded by the Countess of Huntingdon, whom Haweis served as chaplain. After completing advanced studies at Cambridge, he published a Bible commentary and a volume on church history. Haweis was strongly interested in missions and helped to found the London Mission Society. His hymn texts and tunes were published in Carmino Christo, or Hymns to the Savior (1792, expanded 1808). Bert Polman ============================ Haweis, Thomas, LL.B., M.D., born at Truro, Cornwall, 1732. After practising for a time as a Physician, he entered Christ's College, Cambridge, where he graduated. Taking Holy Orders, he became Assistant Preacher to M. Madan at the Lock Hospital, London, and subsequently Rector of All Saints, Aldwincle, Northamptonshire. He was also Chaplain to Lady Huntingdon, and for several years officiated at her Chapel in Bath. He died at Bath, Feb. 11, 1820. He published several prose works, including A History of the Church, A Translation of the New Testament, and A Commentary on the Holy Bible. His hymns, a few of which are of more than ordinary merit, were published in his Carmina Christo; or, Hymns to the Saviour. Designed for the Use and Comfort of Those who worship the Lamb that was slain. Bath, S. Hayward, 1792 (139 hymns), enlarged. London, 1808 (256 hymns). In 1794, or sometime after, but before the enlarged edition was published, two hymns "For the Fast-day, Feb. 28, 1794," were added to the first edition. These were, "Big with events, another year," and "Still o'er the deep the cannon's roar." The most popular and widely used of his hymns are, "Behold the Lamb of God, Who bore," &c.; "Enthroned on high, Almighty Lord"; and “O Thou from Whom all goodness flows." The rest, all being from Carmina Christo, first edition 1792, are:— 1. Dark was the night and cold the ground. Gethsemane. 2. From the cross uplifted high. Christ in Glory. 3. Great Spirit, by Whose mighty power. Whitsuntide. 4. Submissive to Thy will, my God. Resignation. 5. The happy morn is come. Easter. 6. Thou Lamb of God, that on the tree. Good Friday. The hymn, "Thy Head, the crown of thorns that wears," in Stryker & Main's Church Praise Book, N. Y., 1882, begins with st. ii. of this hymn. 7. To Thee, my God and Saviour, My heart, &c. Praise for Redemption. --John Julian, Dictionary of Hymnology (1907)
Thomas Haweis 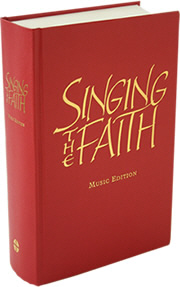