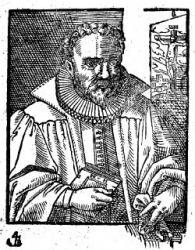 Behm, Martin, son of Hans Behm [Bohme, Boehm, Behemb, Behem, Boheim, Bohemus or Bohemius], town-overseer of Lauban in Silesia, was born at Lauban, Sept. 16, 1557. During a protracted famine, 1574, Dr. Paul Fabricius, royal physician at Vienna, a distant kinsman, took him to Vienna, where he acted as a private tutor for two years, and then went to Strassburg, where, from Johann Sturm, Rector of the newly founded University, he received much kindness. Returning home at his mother's request after his father's death, May, 1580, he was, at Easter, 1581, appointed assistant in the Town School, and on Sept. 20, ordained diaconus of the Holy Trinity Church. After his senior had been promoted to Breslau the Town Council kept the post nominally vacant for two years, and then, in June, 1586, appointed Behm chief pastor. For 36 years ho held this post, renowned as a preacher, as a faithful pastor in times of trouble (famine 1590, pestilence 1613, war 1619), and as a prolific author. After preaching on the tenth Sunday after Trinity, 1621, he was seized with illness, and after he had lain for twenty-four weeks on a sick bed, there was ministered to him, on Feb. 5, 1622, the abundant entrance of which he sings in his hymn, "O Jesu Christ, meins Lebenslichtr” (Koch, ii. 227-234; Allg. Deutsche Biographie,ii. 282).

He was one of the best hymn-writers of his time. His hymns are true and deep in feeling, dwelling specially on the Passion of Our Lord. They speedily passed into the hymn-books, and long held their place therein. Of about 480 hymns which he composed, the most important appeared in his:—

Four of his hymns have been translated into English, three being in English common use:—