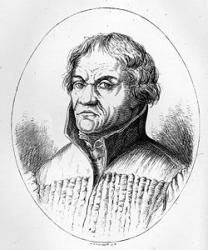 Eber, Paul, son of Johannes Eber, master tailor at Kitzingen, Bavaria, was born at Kitzingen, Nov. 8, 1511. He was sent in 1523 to the Gymnasium at Ansbach, but being forced by illness to return home, was on his way thrown from horseback and dragged more than a mile, remaining as a consequence deformed ever after. In 1525 he entered the St. Lorentz school at Nürnberg, under Joachim Camerarius, and in 1532 went to the University of Wittenberg, where he graduated 1536, and thereafter became tutor in the Philosophical Faculty. He was appointed Professor of Latin in 1544, then in 1557 Professor of Hebrew and Castle preacher, and in 1558 Town preacher and General Superintendent of the Electorate, receiving in 1559 the degree D.D. from the University. He died at Wittenberg, Dec. 10, 1569 (Koch, i. 271-278; Allgemeines Deutsche Biog., v. 529).

At Wittenberg he was a close friend of Melanchthon, was privy to all his plans, and conducted the greater part of his correspondence. After Melanchthon's death in 1560, he became leader of his party, and had to engage in various controversies with the Crypto-Calvinists, &c.; the seeds of his fatal illness being sown on his return journey from the fruitless conference held at Altenburg with the theologians of Jena, which lasted from Oct. 20, 1568, to March 9, 1569.

Eber was, next to Luther, the best poet of the Wittenberg school. His hymns, some of them written for his own children to sing to Luther's melodies, are distinguished for their child-like spirit and beautiful simplicity. Seventeen hymns have been attributed to him, four of which are certainly his, and probably two others. Of these six, five have been translated into English, one of which is noted under "Dicimus grates," and the others are:—

i. Herr Jesu Christ, wahr Mensch und Gott. For the Dying. The first hymnbook in which this simple and beautiful hymn has been found is the Low German Enchiridion, published at Hamburg, 1565, where it is in 8 stanzas of 6 lines., entitled "A prayer to Christ for a happy departure from this troublous life," and marked as "D. Paulus Eberus Filiolis suis faciebat MDLVII. Wackernagel, iv. p. 4, gives this and a second form in High German from the Psalmen, Geystliche Lieder und Gesänge, Strassburg, 1569. In his Bibliographie, 1855, p. 233, Wackernagel describes an undated broadsheet, which he would date 1550, and at p. 279 says it forms the first of Neun Schöne Geistliche Lieder, Nürnberg N.D., c. 1556. G. Döring, in his Choralkunde, Danzig, 1865, p. 434, says it appeared as "Panie Jezu ty's czlowiek i Bog" in the Polish Cantional, edited by Pastor Seklucyan, and published at Königsberg, 1559. Lauxmann, in Koch, viii, 591-594, adds that it comforted Eber himself while he lay a-dying, Dec. 10, 1569; was repeated by Hugo Grotius a few minutes before his death, Aug. 28, 1645; and was a favourite hymn of Prince Wolfgang of Anhalt (d. 1566), Christian I., Elector of Saxony (d. 1591), of the Margrave Georg Friedrieh of Brandenburg-Kulmbach (d. 1603), &c. Included as No. 820 in the Unv. L. S., 1851. The translations in common use are:—

These lines comforted Melanchthon in 1546; and Lauxmann, in Koch, viii. 161-165, thinks probably Eber also. He relates that on Ascension Day, 1547, after the battle of Mühlberg, the Wittenbergers having received a message from the captive Elector to deliver their city to the Emperor Charles V. assembled for prayer in church; and quotes a portion of the prayer by Bugenhagen which greatly resembles Eber's hymn. But that the hymn was written then we have no proof, and the earliest source quoted by Wackernagel, iv. p. 6, is the Naw Betbüchlein, Dresden 1566, in 7 stanza of 4 line., though in his Bibliographie, 1855, p. 312, he describes a broadsheet printed at Nürnberg, N.D., c. 1560. In M. Moller's Meditationes sanctorum Patrum, Görlitz, 1584, it is entitled "A beautiful prayer of the venerable Dr. Paul Eber, which he composed on the beautiful words of King Jehoshaphat, 2 Chron. xx. 12." Included as No. 583 in the Unv. L. S., 1851.

A "Cry from the depths," though not in despair but in trustful confidence in God, it is one of the finest and most widely used hymns of the Reformation period. Lauxmann relates how the singing of this hymn and the prayers of Martin Rinkart (q.v.), Archidiaconus of Eulenburg near Leipzig, prevailed to move the heart of the Swedish Lieutenant-Colonel, who on Feb. 21, 1635, had demanded from the inhabitants a ransom of £4500, but eventually accepted 2000 florins; says that in commemoration of a similar deliverance from the Swedish army in 1642 the hymn was long sung at the end of the Sunday afternoon service at Pegau, near Leipzig, and adds other incidents regarding its use.

His hymns not in English common use are:—
iii. Helft mir Gottes Güte preisen. [New Year.] Written on the name Helena, borne both by his wife and his daughter, the initial letters of each stanza composing it. Wackernagel, iv. p. 6, quotes it from Eichorn's Geistliche Lieder, Frankfurt a. Oder, c. 1580, in 6 st. of 8 l., entitled, "A Thanksgiving and Prayer for the New Year, in remembrance of God's goodness, for the Children." Older but less correct forms are noted by Mützell, p. 486, as in the Copenhagen GesangBuch,1511, and the Stettin, 1576. Included as No. 68 in the Unv. L. S., 1851. It is translation as, "Ye Christians in this nation," by J. C. Jacobi, 1722, p. 11 (1732, p. 10, altered and beginning, "Come, let us all, with Fervour.")
iv. In Christi Wunden schlaf ich ein. [For the Dying.] Appears in Jeremias Weber's Gesang-Buch, Leipzig, 1638, p. 797, marked as "Another" (the hymn immediately preceding is ascribed to Eber), in 3 st. of 4 1. In the Berlin Geistlicher Lieder Schatz, ed. 1863, No. 1468, the text is slightly varied, and arranged in 2 st. of 6 1. It was first ascribed to Eber in the Nürnberg Gesang-Buch, 1676. Lauxmann, in Koch, viii. 595-601, says of it, "That the hymn is much older than the date of its appearance [i.e. than 1638] seems obvious; that it breathes the childlike spirit of Eber is certain. More than this we cannot say." St. i., 11. 3-6, "Ja Christi Blut und Gerechtigkeit," has been adopted by many pious Germans, young and old, as a prayer in life and death, and Lauxmann relates many interesting incidents regarding its use by A. G. Spangenberg, by Wilhelm Hey, and others. These four lines were adopted by N. L. von Zinzendorf, as the first stanza of his well-known hymn, "Christi Blut und Gerechtigkeit" (q. v.). It is translation as, "I fall asleep in Jesus' arms," by Miss Winkworth, i860, p. 121. [Rev .James Mearns]