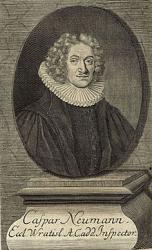 Neumann, Caspar, son of Martin Neumann, city tax-collector at Breslau, was born at Breslau, Sept. 14,1648. He entered the Unversity of Jena in Sept. 1667, graduated M.A. in August 1670, and was for some time one of the University lecturers. On Nov. 30, 1673, he was ordained at the request of Duke Ernst of Gotha as travelling chaplain to his son, Prince Christian, whom he accompanied through Western Germany, Switzerland, Northern Italy, and Southern France; returning to Gotha in 1675. In 1676 he became court preacher at Altenburg, but in Dec. 1678 was appointed diaconus of the St. Mary Magdalene Church at Breslau, and pastor there in 1689. Finally, in Feb. 1697 he became pastor of St. Elizabeth's at Breslau, inspector of the churches and schools of the district, and first professor of theology in the two Gymnasia at Breslau. He died at Breslau, Jan. 27, 1715 (S. J. Ehrhardt's Presbyterologie Schlesiens i. 211; Allgemeine Deutsche Biographie xxiii. 532, &c). Neumann was a celebrated preacher, and edited a well-known prayer-book, entitled Kern alter Gebete (Breslau, 1680; complete ed. Breslau, 1697) which passed through many editions. He wrote over thirty hymns, simple, heartfelt and useful, which became very popular in Silesia, and almost all of which passed into Burg's Gesang-Buch, Breslau, 1746, and later editions. They mostly appeared, with his initials, in the 9th ed., N.D., but about 1700, of the Breslau Vollständige Kirchen-und Haus-Music. Those which have been translated are:—

Caspar (or Kaspar) Neumann (14 September 1648 – 27 January 1715) was a German professor and clergyman from Breslau with a special scientific interest in mortality rates.
Wikipedia Biography
TextsTunesHymnals