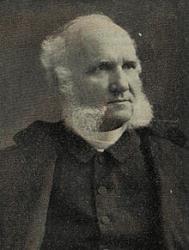 Joseph A. Seiss was born and raised in a Moravian home with the original family name of Seuss. After studying at Pennsylvania College in Gettysburg and completing his theological education with tutors and through private study, Seiss became a Lutheran pastor in 1842. He served several Lutheran congregations in Virginia and Maryland and then became pastor of St. John's Lutheran Church (1858-1874) and the Church of the Holy Communion (1874-1904), both in Philadelphia. Known as an eloquent and popular preacher, Seiss was also a prolific author and editor of some eighty volumes, which include The Last Times (1856), The Evangelical Psalmist (1859), Ecclesia Lutherana (1868), Lectures on the Gospels (1868-1872), and Lectures on the Epistles (1885). He contributed to and compiled several hymnals.