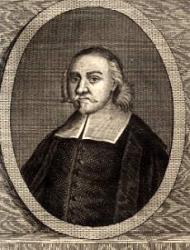 Gesenius, Justus, D.D., son of Joachim Gesenius, pastor at Esbeck, near Lauenstein, Hannover; was born at Esbeck, July 6, 1601. He studied at the Universities of Helmstedt and Jena, graduating M.A at Jena in 1628. In 1629 he became pastor of St. Magnus's Church, Brunswick; in 1636 court chaplain and preacher at the Cathedral in Hildesheim; and in 1642 chief court preacher, consistorialrath, and general superintendent at Hannover. He died at Hannover, Sept. 18, 1673 (Koch, iii 230-237; Allgemeine Deutsche Biographie, ix. 87-88; Bode, p. 76, &c).

Gesenius was an accomplished and influential theologian, a famous preacher, and distinguished himself by his efforts to further the catechetical instruction of the children of his district. Along with D. Denicke (q.v.) he edited the Hannoverian hymnbooks of 1646-1660. Both he and Denicke aimed at reducing the older German hymns to correctness of style according to the poetical canons of Martin Opitz; not so much interfering with the theology or making the authors speak a terminology foreign to them. Consequently their recasts, while setting a bad example, and while often destroying much of the force and freshness of the originals, were not by any means so objectionable as the recasts of the Rationalistic period, and moreover were soon widely accepted.